This NAVCAM mosaic comprises four individual images taken on 4 November from a distance of 31.8 km from the centre of Comet 67P/C-G. The image resolution is 2.7 m/pixel, so each original 1024 x 1024 pixel frame measured 2.8 km across. The mosaic has been slightly rotated and cropped, and measures roughly 4.6 x 3.8 km.

This mosaic was relatively tricky to make, given the lack of features in some of the overlap regions and some rotation of the comet between images. But as always, the individual images have also been made available below to allow you to check on the accuracy of the mosaicing.

The larger lobe of the comet is seen in the foreground and the smaller lobe behind (Note: the original post had this the wrong way round, sorry!). As with the OSIRIS image posted yesterday, we are looking into deep shadows on the small lobe, below the ‘neck’ of the comet. However, the brightly sunlit parts of the comet reflect enough light into the shadows to reveal hints of the features there, with the help of some image processing to bring out the full dynamic range.

Emission from gases escaping from the nucleus of 67P/C-G is also visible on the right side of the image, although it is not immediately obvious in this picture where the source of the emission is. Finally, there are many small white blobs in the image which could well be real objects in the vicinity of the comet rather than cosmic ray events hitting the detector. 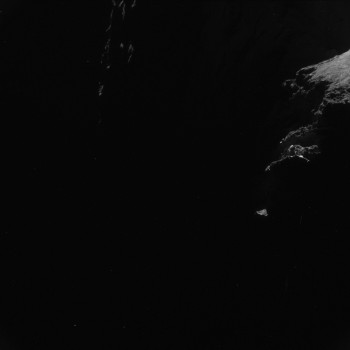 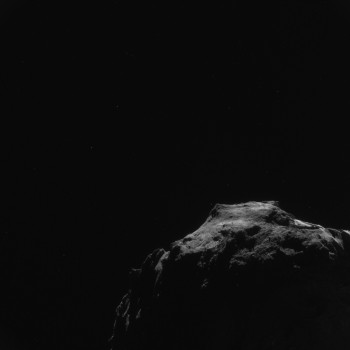 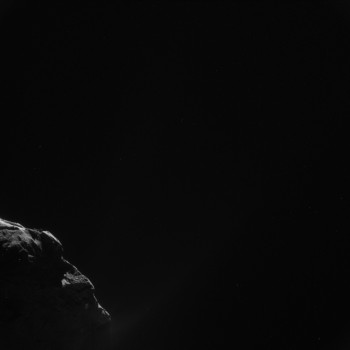 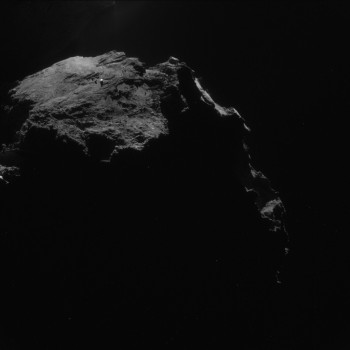