Into the shadows of Comet 67P/C-G

Based on latest images and information provided by the OSIRIS team

The OSIRIS team has been taking advantage of their camera’s high dynamic range in order to gather information from regions of Comet 67P/Churyumov-Gerasimenko that on first impressions appear to be in total darkness.

Quick recap from the OSIRIS team: unlike standard cameras that encode information in 8 bits per pixel and can thus distinguish between 256 shades of grey, OSIRIS is a 16-bit-camera. This means that one image can comprise a range of more than 65000 shades of grey – much more than a standard computer monitor can display. In this way, OSIRIS can see black surfaces darker than coal together with white spots as bright as snow in the same image. (See also our related post: NAVCAM’s shades of grey).

Above: An image of Comet 67P/Churyumov-Gerasimenko obtained on 30 October 2014 by the OSIRIS scientific imaging system from a distance of approximately 30 kilometres and displayed with two different saturation levels. While in the left image the right half is obscured by darkness, in the right image surface structures become visible. The image scale is approximately 0.5 metres/pixel, so the images measure about 1.1 km across. Credits: ESA/Rosetta/MPS for OSIRIS Team MPS/UPD/LAM/IAA/SSO/ INTA/UPM/DASP/IDA.

When a region of the comet is imaged in shadow, the light scattered from dust particles in the comet’s coma can offer some illumination, in combination with some adjustment of the saturation levels of the image. The first two images included in this post (above), taken on 30 October by the OSIRIS narrow-angle camera from a distance of approximately 30 kilometres illustrate this technique. They show the same portion of the comet but are displayed with two different saturation levels: while in the first image the right half is obscured by darkness, in the second image surface structures become visible.

The team also managed to get a glimpse of the as yet unseen southern side of the comet on 29 September, when Rosetta was completing the ‘night-time’ excursion reported on previously. This part of the comet is, at the present time, facing away from the Sun, making it impossible to determine shape and surface structures. This is because the comet’s rotation axis is not perpendicular to its orbital plane but is tilted, and so parts of its surface can at times remain in total darkness – comparable to the weeks of complete darkness in Earth’s polar regions. 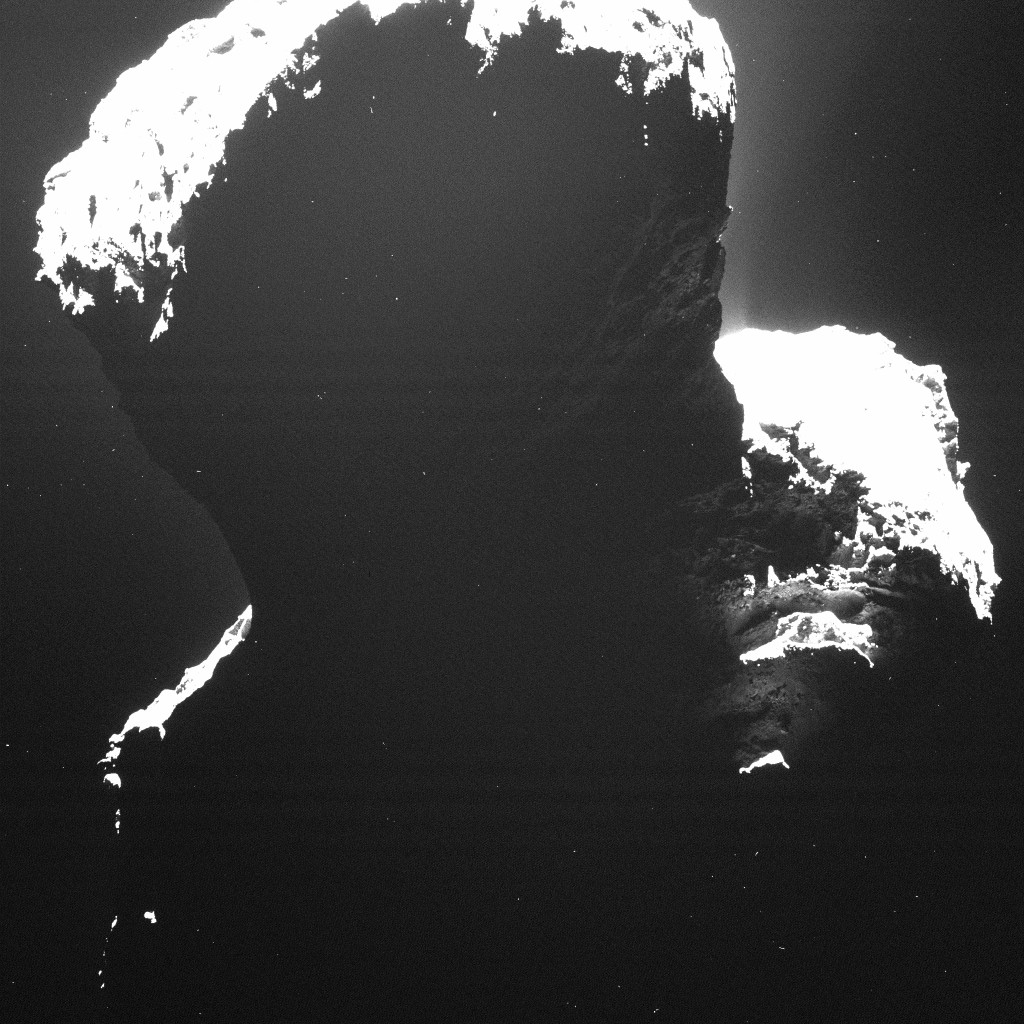 A rare glimpse at the dark side of Comet 67P/Churyumov-Gerasimenko. Light backscattered from dust particles in the comet’s coma reveals a hint of surface structures. This image was taken by OSIRIS, Rosetta’s scientific imaging system, on 29 September 2014 from a distance of approximately 19 kilometres. The image scale is approximately 1.7 metres/pixel, so the frame measures about 3.5 km across.
Credits: ESA/Rosetta/MPS for OSIRIS Team MPS/UPD/LAM/IAA/SSO/INTA/UPM/DASP/IDA.

But light backscattered from dust particles in the comet’s coma reveals a hint of surface structures in this mysterious region, although as you can see from the image, much of it still remains in total shadow – for now.

This ‘dark side’ promises to hold the key to a better understanding of the comet’s activity – once the comet draws closer to perihelion next year (perihelion is 13 August 2015, when the comet will be 186 million kilometres from the Sun – roughly between the orbits of Earth and Mars). Then the comet’s southern side will be fully illuminated and subjected to especially high temperatures and radiation. As a result, the OSIRIS scientists believe this side to be shaped most strongly by cometary activity.

In addition, once the details of this side of the comet are known, then parameters such as mass, volume and density can be further refined.