Early in September we reported that Rosetta’s COSIMA instrument, the COmetary Secondary Ion Mass Analyser, had detected its first dust grains. Now some results from the first compositional analyses are in, as Martin Hilchenbach reports for the COSIMA team: 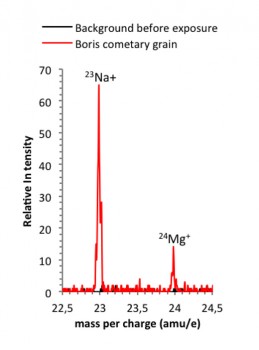 Secondary ions of a cometary grain collected next to Comet 67P/C-G.
This spectrum shows the positive mass per charge from 22.5 amu/e to 24.5 amu/e obtained on 7 August 2014, before exposure of the first COSIMA target-holders (shown in black) and from the “shot and hit” grain Boris (shown in red) collected during the second exposure week (18-24 August 2014) at about 80 km from Comet 67P/C-G. Each spectrum is the sum of two spectra taken at the same position, each taken for a period of 2.5 minutes.
Credit : ESA/Rosetta/MPS for COSIMA Team MPS/CSNSM/UNIBW/TUORLA/IWF/IAS/ESA/BUW/
MPE/LPC2E/LCM/FMI/UTU/LISA/UOFC/vH&S

COSIMA started to expose one of its 24 target-holders in the inner coma of Comet 67P/C-G early in the morning of 11 August 2014 and, since then, this plate has been imaged weekly to detect new dust grains. It was certainly good to do this even in this very early mission phase with low comet activity, as pictures taken on 24 August 2014 revealed a collection of small to moderately large grains (see image in COSIMA catches cosmic dust).

Detecting grains is not the end of the story; once we have detected one or more grains the next step is to investigate their composition. One of the first grains to be analysed by COSIMA for its chemical mineral composition was the cometary dust grain that we’ve nicknamed Boris. Since we have to discuss a lot of our science and science planning over the phone, naming features or grains is essential for communication within the COSIMA team. But, while some team members were at first very thrilled to have a “personal” cometary grain, they pretty soon figured out that there was a tiny hitch attached: To get a first grip on the chemical composition, we have to shoot indium ions at the grain… so, COSIMA recently shot Boris and while the full analysis of this ‘incident’ is still pending, we would like to share the very first results and explain how this was achieved. 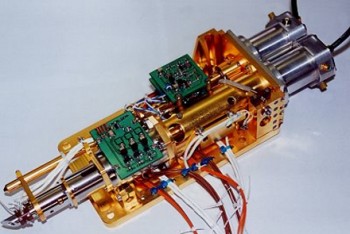 To perform the chemical analysis, PIBS is focused on regions of interest on the target plate – these can be for either a dedicated measurement of the background emission or to analyse potential cometary grains (such as Boris). A primary ion beam of indium-115, about 50 µm in diameter, sprays the surface of the selected feature in order to extract secondary ions that are sputtered off the feature. By switching polarity of the mass spectrometer potentials, COSIMA is able to collect either positive or negative secondary ions. These ions are accelerated by an electric field off the grain and are sorted according to their velocity. Then the trail of ions is counted one by one by the microsphere plate ion detector according to their arrival time, with an accuracy of about 2 ns. The time it takes an ion to hit the plate allows us to calculate its mass, because lighter ions arrive first and heavier ions arrive later. When we plot the mass per charge spectrum of the ions we can clearly see the chemical composition of the grain surfaces.

The PIBS ion optics concept is sophisticated and unique. When operating PIBS we can select one of two redundant primary ion emitters. Furthermore, sample analysis with a small beam spot and very short ion pulses or surface cleaning of a larger area with a continuous beam can be carried out. But the primary ion beam is not obtained simply by just switching PIBS on and off. Instead, it has to be pulsed to gently spray the sample surface. To create the ‘spray’ indium ions generated from the emitter source pass through a chopper-buncher system. The chopper creates a beam packet by chopping the beam into 48 ns bundles each of which is then compressed by the buncher to provide a 3 ns pulsed beam of about 2000 ions, all in phase, on the sample. The sketch and description below illustrates the buncher function:

Imagine a group of students skating on a road at same speed, one behind the other – these are our packet of ions. A drawbridge whose length is longer than the group of skaters is in front of them. When all the skaters (still travelling at the same speed) are on the drawbridge it rises up 30° at a speed that is fast compared to the speed of the skaters. All the skaters now skate down the slope and, after the bridge, each skater has increased his/her speed in proportion to where he/she was in the group (the last one obtaining a higher speed than the first). In the end, the skaters who were at the back of the group will catch up with the front of the pack, and all of them will arrive at the finish line at the same time.

But we digress – back to our grain Boris. First, we had to measure the secondary ion yield of the target holder, to understand the ‘background’ signal from the plate – this background signal is the black line in the plot that we show at the start of this post. Then we ‘shot’ Boris with the indium-115 beam and collected secondary ions sputtered of the grain – what we measured is shown by the red line in the plot. (Incidentally, it is not an easy task to hit a 30-50 micron spot that is at 3 AU from your office…!)

As you can see from the plot, these first results show that among the grain’s components are magnesium and sodium. Since 95 percent of the known observed minerals in comets resemble olivine and pyroxenes – containing a lot of magnesium – the detection of this element is not a big surprise. But, finding sodium in the dust grain, in a refractory mineral phase, has sparked our interest considerably.

The coma and tails of other comets are already known to contain sodium; it was observed in the dust samples returned from Comet Wild 2 by NASA’s Stardust mission, and a prominent example was also the sodium tail of Comet Hale-Bopp that flew past the Sun in April 1997 and which could be seen in the night sky for many weeks. However, by contrast, neither sodium nor magnesium were observed in Comet 67P/C-G dust grains before sampling the inner coma dust. But our dust grain Boris has showed off with clear sodium and magnesium mass peaks in the secondary ion mass spectra that we obtained.

Tracking down the source of the sodium, in other words, trying to identify in situ in the dust grains what compound contains sodium, is the next task for our team.