Ever since early August, when Rosetta rendezvoused with Comet 67P/Churyumov-Gerasimenko at a distance of roughly 100 km, the on-board navigation camera (NAVCAM) has been returning images that depict the many different facets of its nucleus. A complex surface emerges from these images, revealing valleys, cliffs, boulders, and craters all over the comet.

NAVCAM takes black-and-white images and the surface of 67P/C-G shows a wide dynamic range of light and dark regions, depending on the illumination conditions and surface characteristics at any given area. But what do “light” and “dark” mean for an object like 67P/C-G? Followers of this blog have asked this and similar questions, so here are some details on how NAVCAM images are taken and displayed to make a wide range of surface features possible.

Four-image NAVCAM mosaic of Comet 67P/Churyumov-Gerasimenko, using images taken on 24 September 2014 when Rosetta was 28.5 km from the comet. On the left, the contrast was enhanced by setting the darkest pixels as black and the brightest ones as white; on the right, the intensities were scaled so that the mean brightness of fully illuminated regions of the comet is around 4%. Credit: ESA/Rosetta/NAVCAM

Let’s start with the light available to take pictures by. At present, 67P/C-G and Rosetta are out beyond the orbit of Mars and the Sun is roughly only 10% as bright as they would see if they were in orbit around the Earth. In addition, the surface of comets can be very dark, reflecting less than 10% of the light that falls on them – something that has been known since ESA’s Giotto flyby of Comet 1P/Halley in 1986. The technical term used is that comet nuclei have a very low ‘albedo’. For 67P/C-G in particular, astronomers have combined visible light data from the Hubble Space Telescope and ground-based observatories, with infrared data from Spitzer and WISE, to determine that it has an albedo of just 4–6%, as dark as charcoal.

So combining these two facts, there’s not that much light coming from 67P/C-G with which to take a picture. But just as you would do in dimly lit situations on Earth, that can be overcome by using a longer exposure time. In particular, the exposure time needs to be long enough to get above the background noise of the detector, but not so long that any parts of the scene saturate the detector. With NAVCAM, the aim is to get the brightest parts of the comet up to roughly 75–85% of the detector saturation limit, which at present means an exposure time of 6 seconds.

Once a NAVCAM image has been captured and sent back to Earth, it is processed to remove artefacts due to electronic noise. The data are then scaled for display according to their brightness: if left untouched, the darkest parts in the image, where there is essentially no light, will be black, while the brightest parts will be at about 75–85% grey (where 100% grey is white). In practice, some slight additional tweaking of the brightness and contrast is done to bring out the full range of features, with the result that the brightest parts of the nucleus are just about white.

While this is a perfectly standard approach, it admittedly doesn’t give a completely accurate impression of the physical nature of the comet, where even the white parts of the picture are in fact very dark.

But actually, the human eye and brain do this all the time, constantly adjusting their sensitivity and perception of intensities to the scene at hand or even locally within a given scene. This so-called “anchoring” effect is the reason why the Moon appears white or even to shine against the dark night sky, while we know – not least from photos shot by moonwalking astronauts, as well as direct measurements of samples of the lunar soil – that the Moon’s surface is in fact a dark shade of grey, with an average albedo of around 12%.

The “checkershadow” illusion, an optical illusion published by Edward H. Adelson in 1995; on the left hand side, squares A and B look to have very different brightness, but are in fact the same, as demonstrated on the right. ©1995, Edward H. Adelson, Massachusetts Institute of Technology

A classic example is provided in the “checkershadow” optical illusion, which shows a column casting a shadow over parts of a checkerboard pattern. Because of the anchoring effect, the human eye perceives the squares in the shadow to be lighter than they really are, while those outside the shadow are seen to be lighter. In fact, squares A and B are exactly the same shade of grey, which can easily be shown by masking out the rest of the picture.

So, a human in a spaceship next to 67P/C-G may in fact perceive the comet pretty much as it is seen in the intensity-stretched NAVCAM images, if not even brighter. But one way of giving at least a suggestion of just how dark comets are is to show 67P/C-G against a number of other Solar System objects exhibiting a wide range of albedos.

The montage below compares 67P/C-G with the Moon, the Earth, and Enceladus, a moon of Saturn. The brightness of each object in the montage has been scaled according to its mean albedo: for 67P/C-G, we have taken an albedo of 5%; for the Moon, 12%; for Earth, 31% (with deserts having an albedo of roughly 40%, thin clouds 30–50%, thick clouds 60–90%, and oceans 7–10%). Finally, for simplicity, an albedo of 100% has been taken for the brightest parts of the ice-covered surface of Enceladus, the most reflective body in the Solar System.

It’s hard to do this scientifically accurately, partly because the actual albedo in a given image of an object depends on a whole host of factors and because the human eye and brain don’t respond linearly to different light levels. But hopefully this comparison gives at least an impression of quite how dark 67P/C-G is and how diverse the Solar System’s bodies can be. 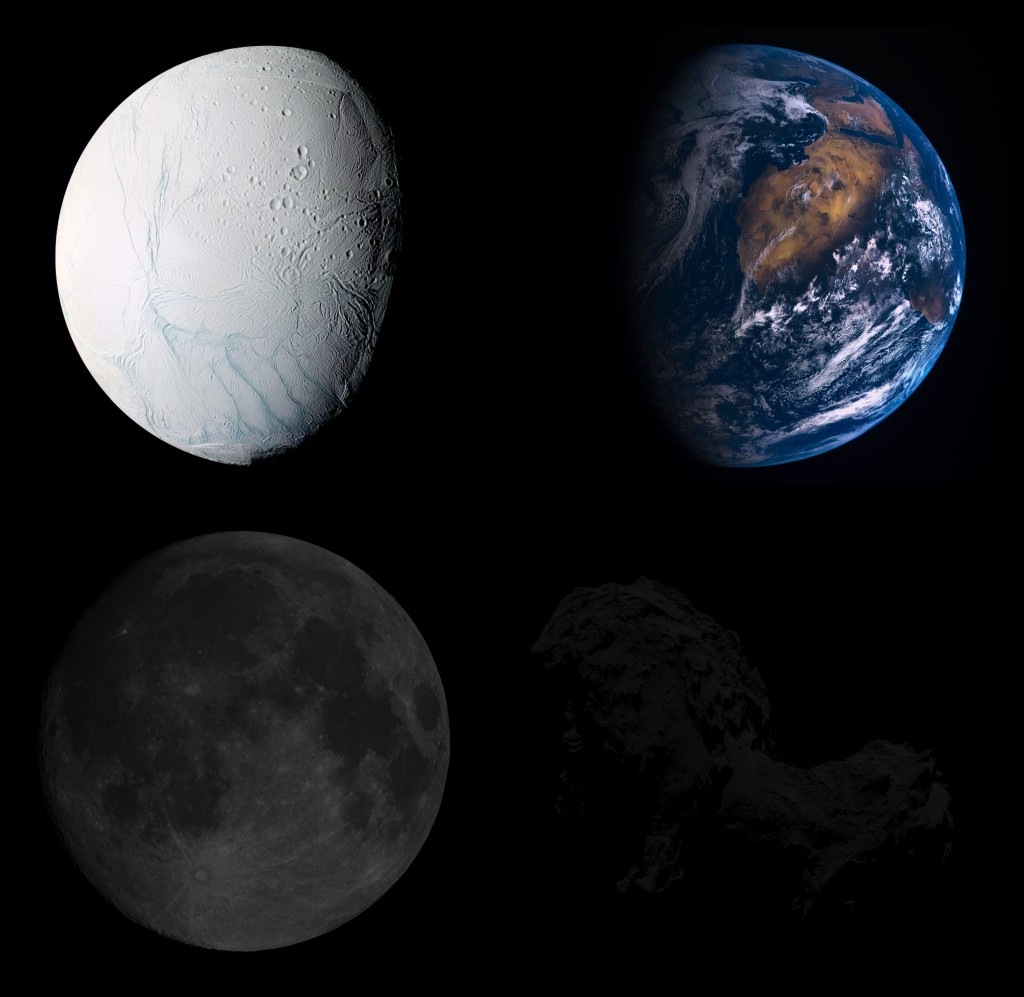 Images of Enceladus, the Earth, the Moon, and Comet 67P/C-G, with their relative albedos scaled approximately correctly. The albedos that were used are: 100% for Enceladus, 31% for the Earth, 12% for the Moon, and 5% for 67P/C-G. The images are not however to scale physically. The image of Earth was taken by the OSIRIS camera on Rosetta during the spacecraft’s last flyby past our planet in 2009.
Credit: NASA/JPL/Space Science Institute (Enceladus); ESA/Rosetta/MPS for OSIRIS Team MPS/UPD/LAM/IAA/RSSD/INTA/ UPM/DASP/IDA and Gordan Ugarkovich (Earth); Robert Vanderbei, Princeton University (Moon); ESA/Rosetta/NAVCAM (67P/C-G).

Another interesting aspect of the NAVCAM images of 67P/C-G is the very crisp and deep shadows. This is a result of a single, distant illumination source, namely the Sun, and the lack of any atmosphere surrounding the comet which would serve to diffuse the light, as on Earth: the developing coma is far too thin to scatter much light. However, on occasion, the deep shadows may be relieved by light reflecting off other parts of the comet, as seen in a number of the NAVCAM images.

Beyond the overall darkness of 67P/C-G, why are some regions nevertheless lighter and darker than the average? Some of this will likely be due to compositional differences across the surface of the comet, with some regions fresher due to activity and others more deeply covered in dust. The Rosetta scientists are studying the composition of the surface through a combination of imaging at different ultraviolet, visible, infrared, and millimetre wavelengths, along with a range of other remote-sensing diagnostics.

But one key difference is down to the angle between the incident sunlight hitting the comet and the reflected light being measured by Rosetta, which scientists call the ‘phase angle’. When the phase angle is large, the spacecraft sees shadows cast over the surface by the light coming in at an angle, but when the phase angle is small, few shadows are seen. 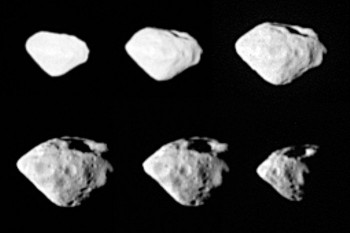 A montage of images of asteroid Steins from Rosetta’s flyby in 2008. In the first image (top left corner), the asteroid was was right ahead of Rosetta while the Sun was at the spacecraft’s back. In this configuration, with the phase angle close to zero, the ‘opposition surge’ effect is evident: the asteroid appears very bright and hardly any shadows are cast. In the following images, as the spacecraft moved and the phase angle increased, the overall brightness is lower but shadows are present, revealing more features on the surface of the asteroid. Credit: ESA 2008 MPS for OSIRIS Team MPS/UPD/LAM/IAA/RSSD/INTA/UPM/DASP/IDA

A particular effect occurs on many airless bodies in the Solar System whose surfaces are covered in dust, including the Moon, asteroids, and comets, when the phase angle reaches zero: with the light coming from behind the observer, a significant brightening is seen, the so-called ‘opposition surge’. This is in part due to the fact that, under these conditions, there are no shadows visible anymore: they are all ‘hidden’ behind the objects (e.g. dust particles and rocks) being illuminated, as seen from the observer. Another effect may occur if the dust particles are roughly the same size as the wavelength of light being measured: this can result in them acting as little retro-reflectors, again causing an increase in brightness at zero phase angle.

Thus, despite the very dark nature of the comet, there is nevertheless much to be learned about its surface structure and composition from observing the small differences in that reflected light, even if it is very faint. Results are expected over the coming months as the scientists analyse the data being collected at this enigmatic body, 67P/C-G.