ESA has given the green light for its Rosetta mission to deliver its lander, Philae, to the primary site on 67P/Churyumov–Gerasimenko on 12 November.  [Read the full ESA Press Release here.]

The decision that the mission is ‘Go’ for Site J also confirms the timeline of events leading up to the landing. The animation below highlights some of the key manoeuvres before, during and after the landing (we’ll provide a separate blog entry with more details about these manoeuvres at a later date).

A series of Go/No-Go decisions must be taken before separation, starting on 11 November with a confirmation from the flight dynamics team that Rosetta is on the right trajectory ahead of lander delivery. Further Go/No-Go decisions will be made during the night of 11–12 November concerning readiness and uplink of commands, culminating in confirmation of the lander readiness for separation. 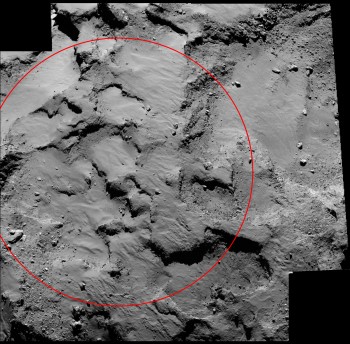 Close-up of the region containing Philae’s primary landing site J. The mosaic comprises two images taken by Rosetta’s OSIRIS narrow-angle camera on 14 September 2014 from a distance of about 30 km. The image scale is 0.5 m/pixel and the image covers about 1 km square. The circle is centred on the landing site and is approximately 500 m in radius.
Credits: ESA/Rosetta/MPS for OSIRIS Team MPS/UPD/LAM/IAA/SSO/INTA/UPM/DASP/IDA

A short manoeuvre must then take place around two hours before separation. This will set Rosetta on course to release Philae on the right trajectory to land on the comet. The final critical Go/No-Go for separation occurs shortly after this manoeuvre. After the release of Philae, Rosetta will manoeuvre away from the comet, before reorienting itself in order to establish communications with Philae.

As reported previously, separation will occur at 08:35 GMT/09:35 CET at a distance of approximately 22.5 km from the centre of the comet. Landing will be about seven hours later at around 15:30 GMT/16:30 CET. With a one-way signal travel time between Rosetta and Earth on 12 November of 28 minutes 20 seconds, that means that confirmation of separation will arrive on Earth ground stations at 09:03 GMT/10:03 CET and of touchdown at around 16:00 GMT/17:00 CET.

During the seven-hour descent, Philae will take images and conduct science experiments, sampling the environment close to the comet. It will take a ‘farewell’ image of the Rosetta orbiter shortly after separation, along with a number of images as it approaches the comet surface. It is expected that the first images from this sequence will be received on Earth several hours after separation. Once safely on the surface, Philae will take a panorama of its surroundings. Again, this is expected back on Earth several hours later.