Today’s lead CometWatch image is a four-image NAVCAM mosaic taken on 24 September from a distance of 28.5 km from the centre of comet 67P/C-G (the four 1024 x 1024 pixel images making up the mosaic are provided at the end of this post). The images are background subtracted to remove some striping and fixed noise patterns.

Note that at these closer distances, it is harder to create accurate mosaics due to combined effect of the comet rotation between the first and last images taken in the sequence (about 10 degrees over 20 minutes), and the fact that the spacecraft has moved some 1-2 km in the same time. The mosaicking programme we are using (Microsoft ICE) seems to have done a nice job of stitching the images together, but if you refer to the four separate images you will see some differences in illumination and shadows due to this rotation and motion. 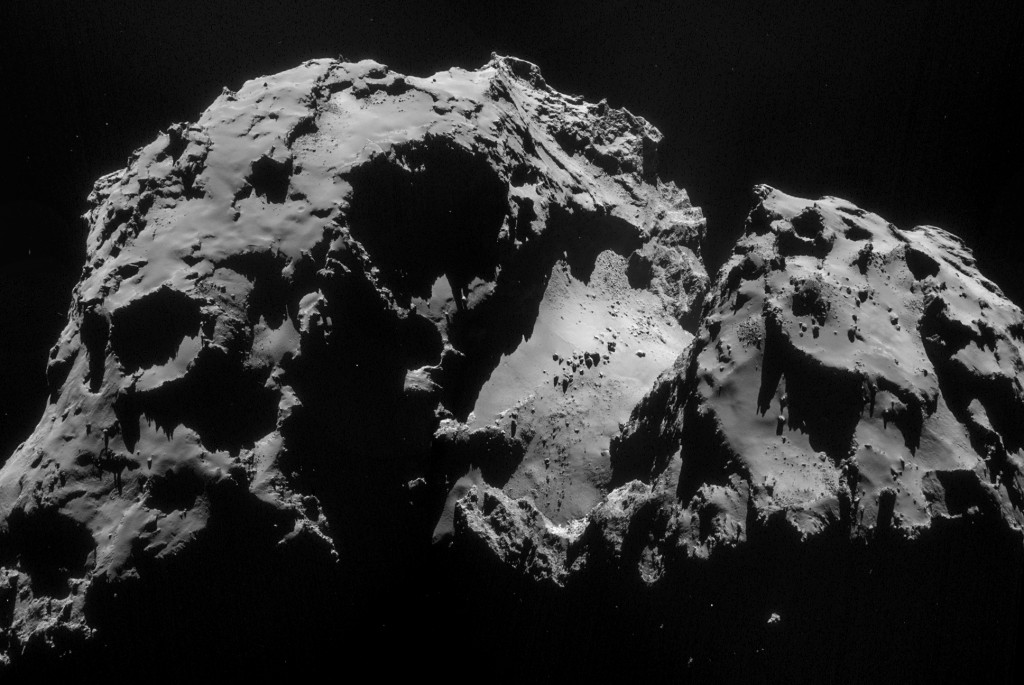 Nevertheless, we can enjoy this very impressive view from NAVCAM, and can point out some interesting features. However, please remember that thorough scientific analyses of what 67P/C-G’s features are, how they came to be, and what they mean for this comet’s history and evolution will come in the form of scientific papers in the fullness of time.

Some obvious features that stand out are the large boulders, several metres across, lying in the smooth ‘neck’ region. Boulders are also seen at the base of exposed cliff faces, for example towards the top left in this image, and on the ‘head’ of the comet.

Other notable features include a variety of depressions with differing morphologies. One prominent example of a crater-like depression is located on the larger lobe (or the ‘body’), to the far left centre of the image. It is about 350 metres across with quite a well-defined rim from this viewing angle, and a mixture of ‘rubble’ and smooth terrain inside. Although the rubble is in shadow in the 23 September mosaic, it is clearly seen in other images, for example in the frame shown below, which was captured on 21 September.

In the same image (towards the left in the 21 September view) another family of depressions can be seen; these are characterised by both irregular and near-circular shapes, steep walls and smooth floors.

Another very different type of crater-like feature again can be seen to the upper right of the large depression in the main image (slightly to the lower right of it in the 21 September image), about 1.5 times the large feature’s diameter away. This one appears to be a rather fresh-looking small ‘dimple’, about 20 metres across.

As discussed during the EPSC conference earlier this month, the majority of the depressions on 67P/C-G have likely formed as a result of activity; that is, through surface collapse either as subsurface ice sublimates out through a porous crust, or as pockets of trapped gases are expelled.

But of course that doesn’t exclude impacts by external sources as a method of crater formation, although in general, due to the active nature of comet surfaces, impact craters that formed billions of years ago have likely long since been erased.

The origin of craters has been debated for other comet nuclei seen in brief flybys of other spacecraft. Fortunately, Rosetta is perfectly placed to determine the origin of these features on 67P/C-G, and if and how they may change over the course of the mission. 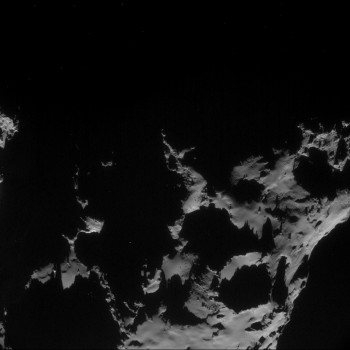 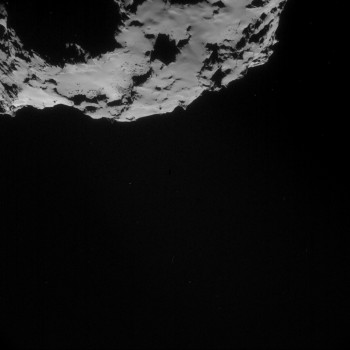