Science with the lander – what to expect when Philae meets 67P

When Rosetta’s Philae lander touches down on comet 67P/Churyumov-Gerasimenko in two months time, a new chapter will begin for the mission. At the European Planetary Science Congress this week, participants heard from the lander team about the science plans.

Rosetta’s orbiter instruments are producing their first preliminary scientific results and many of these were presented at the European Planetary Science Congress (EPSC) that took place this week in Lisbon, Portugal. While scientists are eagerly examining the data and making the first steps towards characterising comet 67P/C-G, there is also something else on their mind: the selection of the primary landing site and the prospect of the science that can be done when Philae is safely settled on the comet.

The approximate locations of the five candidate landing sites are marked on these OSIRIS narrow-angle camera images taken on 16 August from a distance of about 100 km. Credits: ESA/Rosetta/MPS for OSIRIS Team MPS/UPD/LAM/IAA/SSO/INTA/UPM/DASP/IDA

During the Rosetta Special Session at EPSC, the lander science team explained the landing site selection process that began almost as soon as Rosetta arrived at the comet in August, and that will conclude in mid-October with the formal Go for landing from ESA. They emphasised the important role played by the orbiter instruments, in particular ALICE, MIRO, OSIRIS, ROSINA and VIRTIS, in identifying suitable candidate landing sites. Philae will get a chance to repay the compliment when on the comet surface, by providing ground-truth measurements for the orbiter instruments.

This weekend, the primary landing site will be selected from the shortlist of five candidates. The team explained that the landing will be a passive one, meaning that the exact location of landing will be determined by the relative position of Rosetta and the comet at the time of Philae’s deployment, and the speed and direction of the deployment: there is no active steering down onto the surface.

As all of these parameters have uncertainties associated with them, the Rosetta and Philae operations teams can only predict the landing point in advance to within an ellipse typically 1 kilometre long on the surface of 67P/C-G. This is larger than any of the apparently smooth terrains on the reachable parts of the surface of the nucleus, adding to the challenge of selecting the best possible site.

As soon as Philae is released from the orbiter, the lander’s first science will begin. This is called the separation, descent, and landing (SDL) phase and it will last about 5 to 10 hours – the duration will depend on which landing site is selected and what trajectory needs to be flown to deliver the lander.

During the SDL phase, many of the lander instruments  will be active. During the separation and descent of Philae:

With Philae safely on the surface, another series of measurements will begin, marking the start of the so-called first science sequence (FSS). This phase will last for a maximum of 54 hours, and the main goal of this phase is to secure a set of the most important scientific measurements at the surface of the comet. The FSS is split into several blocks with distinct science goals.

For the first several hours, a pre-programmed automated sequence of measurements is made. At this stage:

While this automated sequence is running, the lander operators will determine how Philae is oriented by examining the telemetry data for the solar panels – the power distribution of the panels will let them work out the position of the Sun with respect to Philae and thus Philae’s orientation. They can also compare the panoramic image of the horizon taken by CIVA-P with images of the surface mapped onto digital terrain models. By the time the automated sequence is completed, the lander operators will know how Philae is oriented and can command the lander to rotate to put it in the best position to illuminate the solar panels – this is crucial to ensure that the batteries can be charged as efficiently as possible. 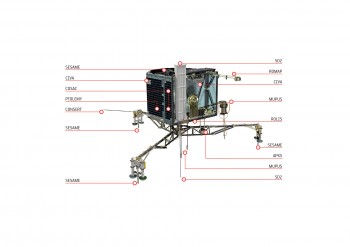 The next sequence of measurements during the FSS is mainly dedicated to investigating the composition of the subsurface, thus the most pristine constituents. During this period, SD2 will drill into the comet surface to take a sample of a few cubic millimetres of material from beneath the surface. While SD2 drills, COSAC and PTOLEMY will sense the release of gases in the surroundings. SD2 will drill twice during this block, with each sample being further heated in an oven to release chemical species that do not otherwise sublimate from solid state. The first sample goes to PTOLEMY to measure how much carbon, hydrogen, oxygen and nitrogen there is, and to identify their isotopic composition, while the second sample goes to COSAC to identify and characterise the heavier molecular compounds. Measurements of the dust in the environment will be made with SESAME.

This is followed by some experiments to study the surface properties. The MUPUS hammer is released and embeds itself into the ground so that it can measure the temperature at various depths in the subsurface. The acoustic signals of the vibrations of the hammer action will be detected by acoustic sensors in the feet of SESAME/CASSE and will be used to measure the mechanical properties of the nucleus. APXS will be deployed to measure the elemental composition of the surface material. SESAME/DIM will investigate dust impacts further, and the dielectric properties of the ground will be measured by SESAME/PP, which can provide some indications about the presence of water ice beneath the surface.

In the next block of measurements, another drill sample will be taken by SD2 and delivered to an oven in which CIVA-M will acquire microscopic images of the samples, both in the visible and in the infrared, to infer its composition. The sample will then be analysed with COSAC at lower oven temperatures than before.

Power and battery recharging permitting, there is the prospect of continuing science operations on the comet surface for the long-term science (LTS) phase, which could run from November until March 2015. The emphasis during this period will be on studying how the conditions and environment at the landing site change as the comet gets closer to the Sun, and to make some additional studies that are among the more challenging of Philae’s science goals. These include searching for comet quakes with SESAME, using COSAC to look for evidence of amino acids in a drilled sample, and making tomographic measurements with CONSERT, by transmitting radio signals between Philae and Rosetta through different parts of the interior of the comet to look for heterogeneity on smaller scales.

However, it is expected that by March 2015, the temperatures of the compartments on the lander will have reached levels that are too high for Philae to continue operating, and the lander’s science mission will come to an end.