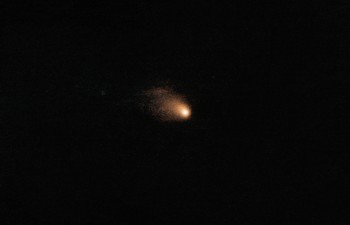 This image of comet 67P/C-G was taken with ESO’s Very Large Telescope on 11 August 2014. It was made by stacking 40 short exposure images (each lasting 50 seconds) and then removing the background stars. The comet’s coma extends at least 19,000 km from the nucleus. The central pixel includes the Rosetta spacecraft, presently at comet 67P/C-G, which is too small to be resolved in the image. The coma is asymmetric, as the dust is swept away from the Sun – located beyond the lower right corner of the image – to form the beginnings of a tail. Credit: Colin Snodgrass/ESO/ESA

Since rendezvousing with Comet 67P/C-G in early August, Rosetta has been mapping the nucleus, the main focus being the search for suitable landing sites for Philae. There are still just over two months to go before Philae is released from Rosetta, but, in some ways, the lander has already begun its descent, as Rosetta itself is already deep inside the ‘atmosphere’ of the comet, namely its coma. If we want a view of the whole comet we need to take a step back from Rosetta, and use telescopes on Earth.

Throughout 2014, astronomers have been monitoring the comet using ground-based telescopes, and they will continue to follow the comet on its orbit around the Sun until the end of 2015. At perihelion on 13 August 2015, Rosetta and the comet will be closest to the Sun, at about 180 million km, between the orbits of Earth and Mars.

Until November 2014, 67P/C-G is only visible from the southern hemisphere, and it is currently in a patch of the sky where it is camouflaged against the crowded star fields of the Milky Way. In addition, at more than 500 million km from the Sun, the comet is still very faint, so only visible to large professional telescopes, including the European Southern Observatory’s Very Large Telescope, or VLT, in Chile.

This sequence of images shows a crowded star field towards the centre of our Galaxy, the Milky Way. In the foreground, comet 67P/Churyumov-Gerasimenko passes through the stars. The comet is difficult to spot, even with a giant telescope like ESO’s Very Large Telescope, but it can be seen here moving across the middle of the frame. Even in this image, careful inspection reveals the comet’s coma.
Credit: Colin Snodgrass/ESO/ESA

The VLT is actually made up of four individual unit telescopes (UT, for short), each with a main mirror 8m in diameter. To observe 67P/C-G, we are currently using the FORS2 instrument on UT1, one of the four VLT telescopes (also named ‘Antu’, the name for the Sun in the language of the indigenous Chilean Mapuche people). We are using FORS2 to take images of the comet, to measure its total brightness and the size and shape of the coma, and to measure the composition of the coma through spectroscopy.

Images of the comet are taken every two nights on average. These are quick snapshot images taken by ESO staff to monitor the comet’s activity, by measuring how its brightness changes over time. The results are used by the Rosetta project to help planning future spacecraft operations.

As the images presented here reveal, the comet is now clearly active, with a dusty coma extending at least 19,000 km from the comet. Its brightness remains in line with predictions based on ground-based data from previous orbits of 67P/C-G, reassuring us that the comet should continue to behave according to our expectations up to the Philae landing and beyond. The overall gentle rise in the comet’s activity leading to perihelion is punctuated by unpredictable variations and outbursts, such as that seen by OSIRIS in April, but these have only a small effect on the average brightness of the whole coma as seen from Earth. 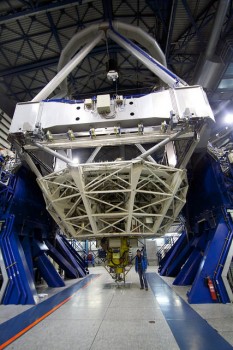 Professor Alan Fitzsimmons from Queen’s University Belfast, UK, standing under one of the VLT unit telescopes. The white cradle supports the giant mirror that makes the telescope able to detect faint objects like Comet 67P/C-G. At night, the roof is opened and the entire building rotates so that the telescope can point at the comet. Light from the comet bounces from the main mirror, off of the smaller mirror that can be seen at the top of the telescope, and into the FORS2 spectrograph and camera (the person-sized yellow instrument under the telescope).
Credit: Alan Fitzsimmons

Once a month, we spend an entire night using the spectroscopic mode of FORS2. This means splitting the light into its component colours, which is essential to study the chemical composition of an astronomical source.

Most of the light we receive from the comet is reflected sunlight, a small amount of which bounces back from the nucleus and the dust in the coma, and makes its way to telescopes on Earth. The spectrum of reflected sunlight is modified at certain wavelengths due to absorption by materials on the comet’s surface or in dust grains in the coma, helping us understand their chemical composition.

We also receive light emitted by the gas in the coma, which glows via fluorescence – the same way a neon light works. The spectrum of the light tells us what types of gases are present in the coma, and the brightness is related to how much gas is there.

Although 67P/C-G is presently quite far from the Sun, we are trying hard to detect gas in the coma now to exploit the unique opportunity of observing it simultaneously with Rosetta at a very early stage in the evolution of the coma. Very careful processing is needed to separate the very small amount of light emitted by the gas from the much larger amount of sunlight reflected by the dust.

There are many different gasses in a cometary coma. The most common is water and was the first gas detected by Rosetta, using the MIRO instrument. However, water is difficult to observe from Earth, as we have to look through our own atmosphere, which contains a lot of water molecules.

With the VLT, we are searching primarily for light emitted by cyanogen – a poisonous gas containing two atoms of carbon and two of nitrogen, known to produce some of the brightest emissions normally seen in comets, in the near-ultraviolet part of the spectrum. So far, we have not been able to detect cyanogen around 67P/C-G, but even this non-detection provides very useful information.

Rosetta’s instruments are already detecting various gasses coming from the nucleus of 67P/C-G, and thus we can use these data to calibrate how sensitive ground-based observations can be. As the comet gets closer to the Sun in the coming months, the amount of gas coming from it will increase, it will become brighter, and at some point, it will be detectable from Earth. This will allow us to compare the ground-based data, which observe the comet’s coma at large, with Rosetta’s measurements in the very inner coma, to understand the abundance of different gasses and the chemical reactions between them. 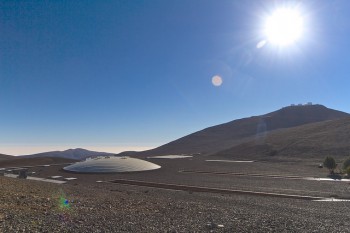 While Rosetta explores the alien world of comet 67P/C-G’s nucleus from close by, astronomers have to travel to one of the most alien places on Earth to observe the comet. The VLT is sited in the Atacama desert in Chile, one of the driest places in the world and renowned for its clear skies. The telescopes are on the mountaintop on the right – in the foreground the dome covers the underground ‘Residencia’, where astronomers sleep during the daytime.
Credit: Alan Fitzsimmons

We are pushing one of the world’s best telescopes to its limits to try and make the most distant ever detection of gas from a Jupiter-family comet. Observing 67P/C-G on a monthly basis using the VLT in the clear skies of the remote Atacama desert in Chile is a major effort, involving a large team of astronomers. To date, astronomers from Germany, the UK, and Italy have participated and Belgian colleagues will take the September shift. In October, we will double the observations, and around the time of the Philae landing in November, we will collect data every night for two full weeks, even though the comet will only be observable for around an hour each night by then.

As the comet gets more active, more telescopes are joining in. Finnish, Belgian, and Taiwanese astronomers have been imaging the comet with smaller professional telescopes, while American and Australian colleagues are joining in with another large telescope in Chile, Gemini South, concentrating on red and infrared wavelengths while the VLT pushes for gas detections in the blue and ultraviolet. Beyond Earth, an international team, including astronomers from the USA and five European countries, used the Hubble Space Telescope to observe 67P/C-G in August and will again near Philae’s landing date.

From December until the middle of next year, the comet will be close enough to the Sun, as viewed from Earth, that it will be in the daytime sky, so night-time observations with large telescopes will have to pause. But the campaign team will be busy preparing for the second half 2015. By then, the comet will be visible from the northern hemisphere. It should also be much brighter and a wider range of telescopes will be turned to view it. All these observations will complement Rosetta’s data by providing the best possible information on the properties of the whole comet, to give context to the mission’s measurements on and around the nucleus.

Results from the ground observation campaign of 67P/C-G will be presented tomorrow, Tuesday 9 September, at the European Planetary Science Congress (EPSC) held in Lisbon, Portugal.