Determining the mass of comet 67P/C-G 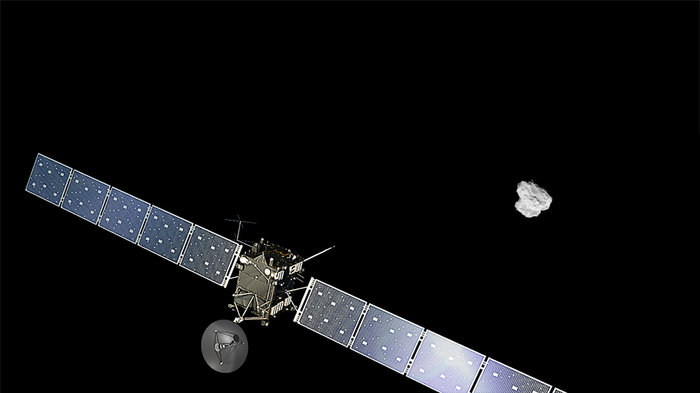 Artist impression of Rosetta approaching comet 67P/Churyumov-Gerasimenko. The comet image was taken on 2 August 2014 by the spacecraft’s navigation camera at a distance of about 500 km.
Credits: Spacecraft: ESA/ATG medialab; Comet: ESA/Rosetta/NAVCAM

Rosetta is equipped with a range of instruments to analyse comet 67P/Churyumov-Gerasimenko, but the spacecraft itself can also be used to determine properties of the comet.

For the Rosetta mission, this task comes under the umbrella of the Radio Science Investigation (RSI). Using 80 hours worth of tracking data between 6 August, since arriving at the comet, and up to 9 August, the RSI team made a first estimate of the comet’s mass as approximately 1×10^13 kg +/-10%, or about 10 trillion kilograms.

The team caution that there is still work to do with analysing errors on the value, not to mention refining the value as the spacecraft gets closer in the coming weeks. Indeed, these early measurements were made from a distance of approximately 100 km; the spacecraft is now en route to a distance of 50 km.

At the same time, in order to be able to navigate the spacecraft close to the comet, ESA’s flight dynamics and operations teams have also independently determined the mass and gravity parameters. These values fall within the same range as those derived by the RSI team.

The values of both teams are constantly being refined as Rosetta moves ever closer to the comet. In time, once accurate dimensions of the comet have also been determined, the comet’s density will be revealed, and assumptions regarding the comet’s interior can be made.