One year to perihelion!

It’s hard to believe that it’s already been a week since Rosetta arrived at comet 67P/Churyumov-Gerasimenko! But while the race is now on to map and analyse the comet in order to find a suitable landing site for Philae in November, we’re also looking much further ahead into the mission. That is, to perihelion, exactly one year from now.

Perihelion is the term used to describe the point in an object’s orbit that it is closest to the Sun. For comet 67P/Churyumov-Gerasimenko, the next perihelion passage falls on 13 August 2015, when it is about halfway between the orbits of Earth and Mars, at a distance of about 186 million kilometres (1.24 AU) from the Sun. 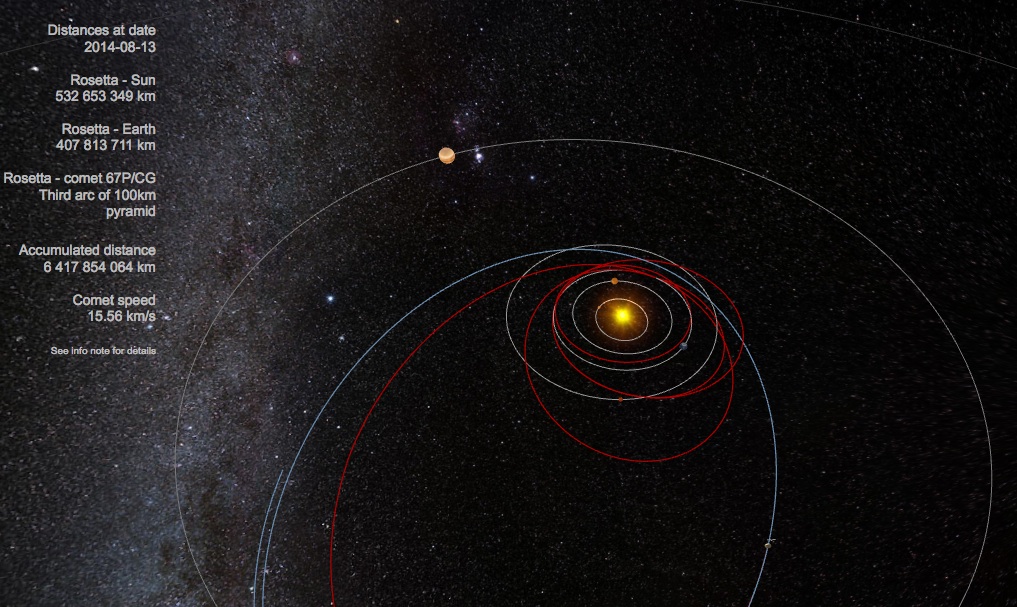 Screen shot from “Where is Rosetta?” interactive tool. Click image to visit tool.

The image shown here is a screen shot from our popular “Where is Rosetta?” tool, and indicates the relative positions of the comet and spacecraft with respect to Jupiter, the inner Solar System planets, and the Sun, today (note the red line shows Rosetta’s ten year journey; in the recently updated version of the tool you can toggle this off). The blue line traces the path of the comet, which is currently between the orbits of Jupiter and Mars. Use the tool to slide through the year and watch how the distances – and speed of the comet (and Rosetta) – change as perihelion approaches.

During this time, the comet will heat up and become more active, throwing out increasing quantities of gas and dust. Rosetta will continue to accompany the comet even after perihelion, as it moves away from the Sun again, monitoring how its activity decreases and providing unique insight into both daily and long-term changes taking place on and around the comet.

At the same time, the ever-changing activity will make for hugely challenging operations as the team try to keep the spacecraft close enough to the comet to do good science, while ensuring that it remains safe. It’s going to be a quite a ride!