The images confirm it: Rosetta has now really arrived at Comet 67P/Churyumov-Gerasimenko! Holger Sierks from the OSIRIS team just presented two new views of the comet in stunning close up detail at the afternoon session of the Rosetta arrival event at ESOC, in Darmstadt. 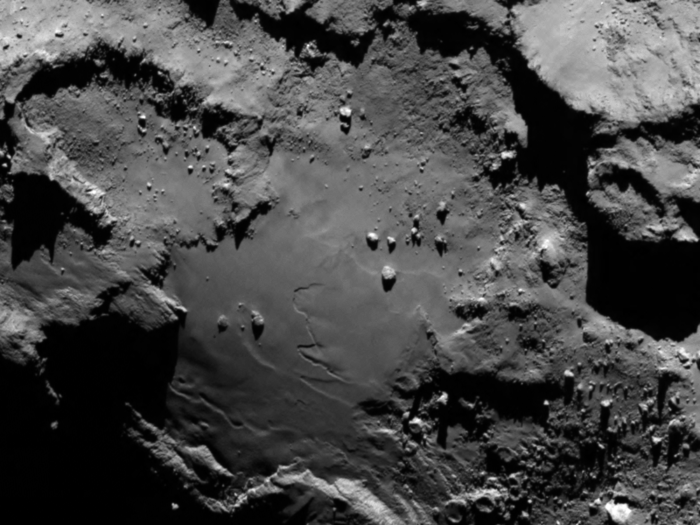 This image, focusing on a smooth region on the ‘base’ of the ‘body’ section of comet 67P/C-G, was taken by Rosetta’s OSIRIS narrow-angle camera and downloaded today, 6 August 2014.

The image clearly shows a range of features, including boulders, craters and steep cliffs. It was taken from a distance of 130 km and the image resolution is 2.4 metres per pixel.

Another close-up detail shows the comet’s ‘head’ at the left of the frame, which is casting shadow onto the ‘neck’ and ‘body’ to the right. This image was taken from a distance of 120 km and the image resolution is 2.2 metres per pixel. 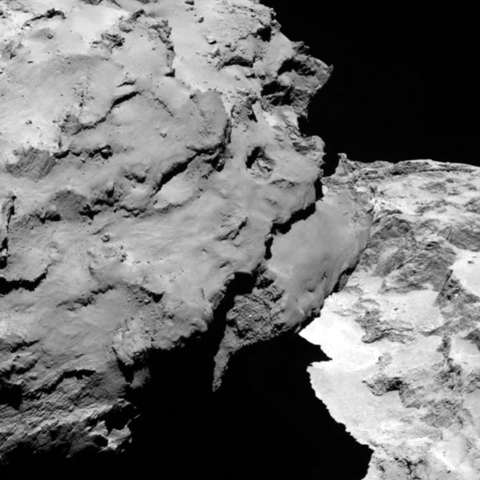 Another close-up view of the comet. Credits: ESA/Rosetta/MPS for OSIRIS Team MPS/UPD/LAM/IAA/SSO/INTA/UPM/DASP/IDA

More on the latest “postcards” from Rosetta here (including higher resolution versions of the images released earlier today).