Could you jump onto a comet?

Editor’s note: In the past few weeks, have you wondered what it would be like riding along with Rosetta, sitting on top and watching comet 67P/C-G drawing steadily closer? And what if, as a Rosetta-riding-astronaut, you got right up close to the mysterious object, near enough to reach out and touch it? In fact, if you were standing on Rosetta, which, ignoring the huge solar arrays, is basically a box 3X2X2m (about the size of a small garden shed), could you get near to the comet, leap off the spacecraft and actually land on 67P? Hmmm… Now that would be cool! As usual with such tough questions, we turned to Professor Rhett Allain and asked him to think this one through for us.

Dr Rhett Allain is Associate Professor of Physics at Southeastern Louisiana University. He writes regularly for Wired’s Dot Physics blog and (like most of us working on Rosetta) is a bit of a physics fanatic. He is author of “National Geographic Angry Birds Furious Forces: The Physics at Play in the World’s Most Popular Game.” He has contributed guest posts to ESA’s ATV blog, including: Could we use ATV to build and supply a real Death Star? Using astronaut Mike Fossum’s YouTube video to measure ATV acceleration and How many calories does it take to bring a calorie to the ISS? (The link to this last one got tweeted by @NASA when we posted it in 2013, and the resulting traffic broke our server… but that’s another story.)

It’s almost there. The Rosetta spacecraft will soon rendezvous with comet 67P/Churyumov-Gerasimenko

Could an astronaut just jump onto the comet?

Suppose that an astronaut was riding along with the spacecraft Rosetta. If Rosetta made a close pass to the comet (which it will), could the astronaut just jump off and land on the comet? It would be just like a cowboy jumping from a horse to a train – if it could work. Let’s get started.

Here is how this could be set up. Suppose that Rosetta makes a close pass to the comet with a speed of about 2 m/s relative to the comet and at closest approach it is about 5 meters away. 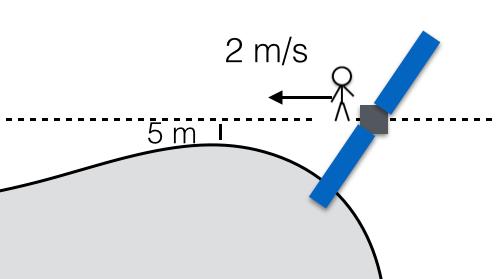 Of course that sketch isn’t to scale, but it gives you an idea of what would happen. You might also ask, “Why is there an astronaut on that spacecraft?” Why would you ask such a crazy question? Clearly, the astronaut wants to get off the spacecraft on onto the comet.

Here are some other starting assumptions.

That’s enough data to start with. Let’s break this motion into different parts.

The astronaut has to jump in order to try to match the velocity of the comet. In the comet reference frame, the comet is stationary and the spacecraft moving at 2 m/s. Could the astronaut jump such that the astronaut ends up with a zero m/s speed?

How hard can an astronaut jump? I’m just thinking about a typical human here – not a professional athlete. On the surface of Earth, let’s say this astronaut could jump in a way to gain a height of 20 cm. Note that is the change in height of the center of mass and not how high the feet move (you could pull your feet up to get more clearance but your center of mass would still only change by 20 cm). 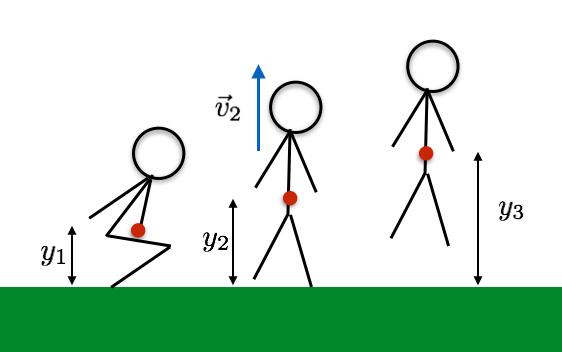 It isn’t really needed right now, but we can also calculate the ‘launch speed’ as the astronaut leaves the ground. In order to move up 20 cm in height, the astronaut would have to start with an initial speed of 1.98 m/s.

Now for the assumption. Let’s assume that when the astronaut jumps off Rosetta, the same amount of energy is used. Of course this might not actually be true, but it’s a good place to start.

Jumping off a spacecraft

Here is a diagram both during and after the “jump’.

As the astronaut pushes on Rosetta, Rosetta pushes back with the same force (this is the basic nature of forces). Also, the force on the astronaut and the force on Rosetta act for the exact same time (since it is the same interaction). The momentum principle says that a force multiplied by a time interval gives you the change in momentum of that object. This means that after the ‘push’, Rosetta and the astronaut will have equal and opposite momentums.

So we now know two things. We know that the momentum (magnitude of momentum) of the astronaut and Rosetta will be the same and we know the total kinetic energy of the two objects (the 376.3 Joules from jumping). I can write this as:

Note that I sort of cheated. First, I wrote the equations for just the magnitudes of the velocities. Second, I assumed that both Rosetta and the astronaut were at rest before the push. Trust me. Everything will be ok in the end. Oh, notice that I am calling the work the astronaut can do Wa.

The nice part is that now I have two equations with two unknowns (the two final velocities). Using some algebra, I get the following two speeds:

Just a quick check. What if Rosetta is the Earth? As the mass of Rosetta gets huge, you can see that it has essentially zero recoil speed and all of the energy goes into the jumping astronaut. It’s always good to check these things.

Putting in values for the masses and the work done by the astronaut, the astronaut would ‘jump’ at a speed of 2.99 m/s and Rosetta would recoil at 0.15 m/s.

Could the astronaut jump to the comet?

Would an astronaut ”fall’ onto the comet?

Where r is the distance from the center of the comet to the astronaut and G is the gravitational constant. Putting in values for the mass and radius of the comet, I get a gravitational force of 0.0042 N and a free-fall acceleration of 5.24 x 10E-5 m/s2. Since the distance doesn’t change too much as the astronaut ‘falls’ (5 meters out of 2,000 meters), this acceleration would be constant.

How long would it take an astronaut to fall to the surface from a height of 5 meters? For objects with constant acceleration, I can use the following kinematic equation:

I know that the change in y is -5 meters and that the initial y-velocity is 0 m/s. This makes it easy to solve for the time:

Using the acceleration from above and a height of 5 meters, I get a free-fall time of 436.9 seconds (7.3 minutes). That’s a long free fall! Enough time to watch a couple of YouTube videos.

So the answer is: Yes. A human astronaut could probably just jump off a spacecraft and land on a comet. Now we just need to do it!