Catching up with the comet’s coma

With the incredible images of comet 67P/Churyumov-Gerasimenko’s nucleus grabbing most of the attention over the last few weeks, we shouldn’t forget about the comet’s coma. Of course, you can still find the most recent image of the nucleus later on in this blog post, but first let’s talk about coma and activity.

In case you are only just joining Rosetta on this unique journey and perhaps discovering the fascinating world of comets for the first time, a comet’s coma is the dust and gas envelope that grows around its nucleus as the comet moves along its orbit and progressively closer to the Sun.

The increasing warmth from the Sun causes surface ices to sublimate (change directly from a solid to a gas), and the gas escapes from the rock–ice nucleus. As the cloud of gas flows away from the nucleus and out into space, it also carries tiny dust particles: together, these slowly expand to create the coma.

The warming continues and activity rises as the comet moves ever closer to the Sun, and the coma grows larger, up to a million kilometres in diameter in some cases. Eventually, pressure from solar radiation and the solar wind causes some of the material to stream out in the opposite direction to the Sun, to form two tails, one made of gas/plasma and the other of dust. When the comet moves away from the Sun and returns to the outer Solar System again, the activity and the resulting coma and tails all fade away. 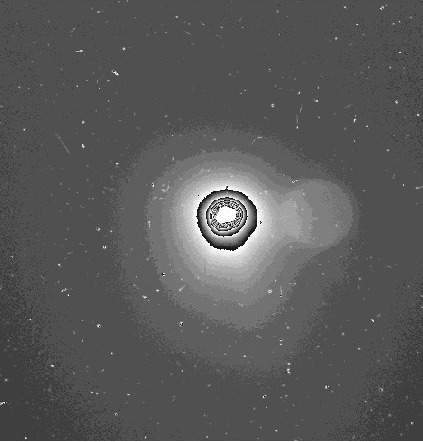 Today, comet 67P/C-G and Rosetta are between the orbits of Jupiter and Mars, about 544 million kilometres from the Sun. It is still a year before it reaches perihelion – its closest distance to the Sun – on 13 August 2015 at 185 million kilometres, between orbits of Mars and Earth.

Rosetta is meeting up with the comet now though, so that we can not only study how the comet warms up along its orbit and how activity develops, but also because it is much safer to learn how to operate in such a new environment when the activity is relatively low. Moreover, landing would be significantly more challenging any closer to the Sun, when activity is expected to be much higher.

So, on to the first of today’s new images. It was taken with the OSIRIS wide angle camera (WAC) on 25 July from a distance of around 3000 km, and with an exposure time of 300 seconds. The image covers an area of about 150 x 150 km. The grey scale of the image reflects the brightness and thus the density of the coma, with more particles close to the nucleus and fewer further away.

A significant challenge in imaging the comet in this way is the bright nucleus that outshines the surrounding coma. Because of the extreme range in brightness, the grey scale has been ‘wrapped’ several times close to the nucleus, but the centre is obscured by over-exposure. While OSIRIS is designed to deal with a controlled overexposure in the region of the nucleus, light from this strong source can cause artefacts by the optical system. For example, the hazy bright circular structure to the right of the comet’s nucleus is one such artefact. Also, stars are seen in the background, along with some ‘streaks’ due to cosmic rays hitting the detector.

Earlier in the year, OSIRIS witnessed a distinct rise in the activity of the comet, showing a coma spanning more than a thousand kilometres around the nucleus. That activity died away again, but nevertheless, this new image clearly reveals an extended coma close to 67P/C-G’s nucleus, where particle densities are highest; it very likely extends much further into its surroundings.

Using the data collected on Rosetta’s approach to the comet, the OSIRIS team are assessing in more detail the behaviour of the comet’s activity. To this end, data obtained from different distances and with different exposure times need to be correlated. This on-going work will also allow the team to determine whether there are any localised spots of activity on the comet’s surface, and how this correlates to the overall development of the coma.

For example, the apparent asymmetric nature of the coma likely results from a combination of the nucleus being an irregular shape and the activity being unevenly distributed across the surface. Furthermore, as the comet rotates, different portions are illuminated with sunlight at different times and, depending on the surface composition, the sublimation rates will vary accordingly. 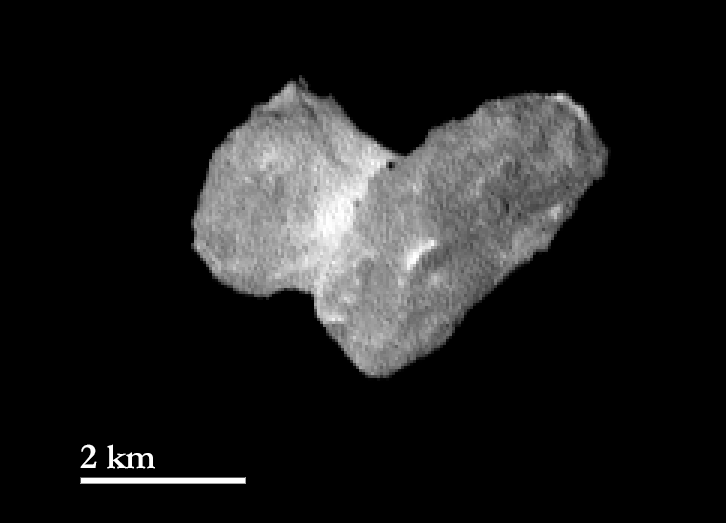 OSIRIS narrow angle camera view of 67P/C-G from a distance of 1950 km on 29 July 2014. Credits: ESA/Rosetta/MPS for OSIRIS Team MPS/UPD/LAM/IAA/SSO/INTA/UPM/DASP/IDA

Meanwhile, the latest narrow angle camera (NAC) view continues to reveal more details regarding the comet’s surface. Taken on 29 July at a distance of 1950 km, one pixel corresponds to about 37 metres. Still clearly visible is the bright ‘neck’ region connecting the two lobes of the nucleus, along with several other discrete bright patches. The reason for these features is still subject to much discussion – they could be due to differences in material or grain size, or to topographical features, for example. A dark spot close to the neck is most likely a shadowing effect. The large surface depression discussed in last week’s image is still apparent at the very ‘top’ of the smaller lobe in this orientation.

This time next week, Rosetta will be within just 100 km of the comet’s nucleus and detailed mapping can begin in order to assess candidate landing sites for Philae. The first OSIRIS image from Rosetta’s rendezvous with the comet on 6 August will be presented during the main arrival event being held at ESA’s spacecraft operations centre in Darmstadt, Germany and published across all ESA channels. Exceptionally, special rapid downlink and processing will be used to make the image available as soon as possible: normally, data are stored on-board and only downlinked typically a few days later, when spacecraft operations permit. For an overview of the programme, including details of how you can watch the transmission via livestream from ESA’s spacecraft operations centre in Darmstadt, Germany, please revisit the recent ‘Call for Media‘ for Rosetta’s comet rendezvous.