In this week’s images, taken on 20 July from a distance of 5,500 km, comet 67P/Churyumov-Gerasimenko’s largest features are beginning to stand out in the OSIRIS narrow angle camera view.

Each image in this sequence is separated by two hours, and the comet rotates with a period of approximately 12.4 hours. The binary nature of the comet can now be seen even images that haven’t been interpolated to smooth out the pixels, which overall has been likened to a duck in shape. The change in position of the dark strip across the ‘neck’ of the comet in the second and third images is a result of the change in illumination and the resulting shadows cast on the surface as the comet rotates.

One area of the neck seems significantly brighter than surrounding regions. This bright region, seen most clearly in the first image, may result from differences in surface composition or grain size. For example, could it be a region of freshly exposed ice or the product of resurfacing. Alternatively, it could be a topographical effect. The cause of this bright region will become clearer once higher-resolution images and spectral data are available.

The comet’s neck, that is, the join between the two segments of the comet nucleus, will hold important clues to the comet’s evolution history. Studying this region from close up, not just with images but also with other instruments to assess its composition, will help determine if the comet is a result of two separate bodies that are fused together, or if it is one object that has eroded in a dramatic fashion to produce the shape we see.

Other features are also becoming apparent, although caution must still be exercised before drawing any robust scientific conclusions. But there is more reason this week to speculate that there might be a large depression – maybe an impact crater – on the smaller lobe of the comet (towards the bottom in the first image in the sequence). The images have a resolution of 100 metres per pixel, implying that this feature could be several hundred metres across. If it does indeed turn out to be an impact crater then its large size – along with composition information collected later – will help teach us about the comet’s interior properties, perhaps offering information on its strength and porosity.

Several other dark features seen on the body of the comet may also be shadows due to depressions, although at this distance it is not yet possible to conclude whether they are impact craters or the result, for example, of localised collapse caused by a weaker subsurface layer giving way – or something else completely!

Even though it is still difficult to discern individual features, it is possible to assess the comet’s shape. Indeed, from the images taken on 14 July, the OSIRIS team has begun modelling the comet’s three-dimensional shape. The animated gif presented here covers one full rotation of the nucleus around its spin axis, to emphasise the lobate structure of the comet. This model will be refined as more data becomes available – it is still a preliminary shape model and some features may be artefacts. Interestingly, the ‘crater’ discussed above, is not very clear at all in this early shape model, showing just how rapidly things are changing as we get closer. 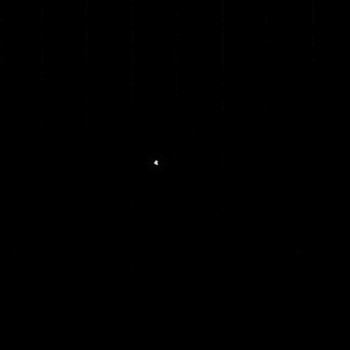 The cadence at which OSIRIS is making observations of the comet is now increasing, focusing on different aspects of cometary science, and not just on the details of the nucleus. In general, some observations will focus on basic parameters of the comet, such as rotation rate and shape, and determining its mass and volume in order to establish its density, while others will provide wider-angle views of comet’s environment. Similarly, Rosetta’s other science instruments are also beginning to analyse the comet at a range of wavelengths to determine the comet’s temperature, gas and dust composition and production rates, nucleus composition and more. By 6 August, we expect to see high-resolution, close-up views of the comet surface.

In addition, Rosetta’s navigation camera, NAVCAM, is now imaging the comet daily for navigation purposes during the final approach. Therefore, presented here is the NAVCAM view from yesterday, 23 July, which also now shows the outline of the comet’s shape.

Shown here (above) is a full-frame (processed) view; the right hand frame presents a cropped, 10x zoom into the comet nucleus. NAVCAM has a 5-degree field of view and takes 1024 x 1024 12-bit per pixel images, so has lower resolution than the OSIRIS narrow angle camera.

The next OSIRIS image will be published a week today, on 31 July. Meanwhile, we plan to publish NAVCAM images on a daily basis during the spacecraft’s final approach to comet 67P/C-G.