The comet takes shape, one pixel at a time!

The comet covers about four pixels in this image, which was taken on 28 June from a distance of about 86 000 km. The accompanying movie, comprising 36 images taken with the NAC on 27-28 June, shows the comet nucleus spinning with a rotation period of 12.4 hours. 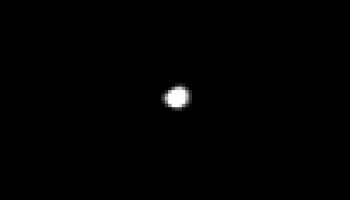 The comet appears – as expected – rather fuzzy from this distance and seemingly covers a slightly larger area than two by two pixels. This is due to the physical effects of the way light is spread inside the imaging system, and is not associated with the comet displaying a coma, for example.

These imaging effects won’t be noticeable once Rosetta is closer to the comet and able to capture the high-resolution images we have all been anticipating. Indeed, there isn’t long to wait before we see what these four pixels are hiding: within the next two weeks the comet will cover an area of 20 x 20 pixels in the NAC.

Today, 3 July, Rosetta is at a distance of about 43 000 kilometres from comet 67P/C-G, and by the end of the weekend will be less than 36 000 km – equivalent to the altitude that geostationary satellites orbit Earth.

Yesterday Rosetta completed the fifth in a series of ten rendezvous manoeuvres required to ensure the spacecraft’s arrival at the comet on 6 August.