The role of amateur astronomers in Rosetta’s mission

Padma A. Yanamandra-Fisher, Rosetta Coordinator of Amateur Observations for 67P/C-G (and Senior Research Scientist at the Space Science Institute, USA), describes how the amateur community is contributing to the study of Rosetta’s comet, providing a new image of the comet at the end of last month.

Amateur astronomers play an important role in observational campaigns of almost every celestial object in the sky, but especially so in the area of comets. Given that some comets might be making their first – or only – passage into the inner Solar System, it is important to collect as much information as possible about them. Then there’s the “once-in-a-lifetime” visits, such as the famous comet 1P/Halley, which orbits once every 76 years. But there is also much excitement to observe comets on much shorter periods, learning about any changes they exhibit since their last apparition. 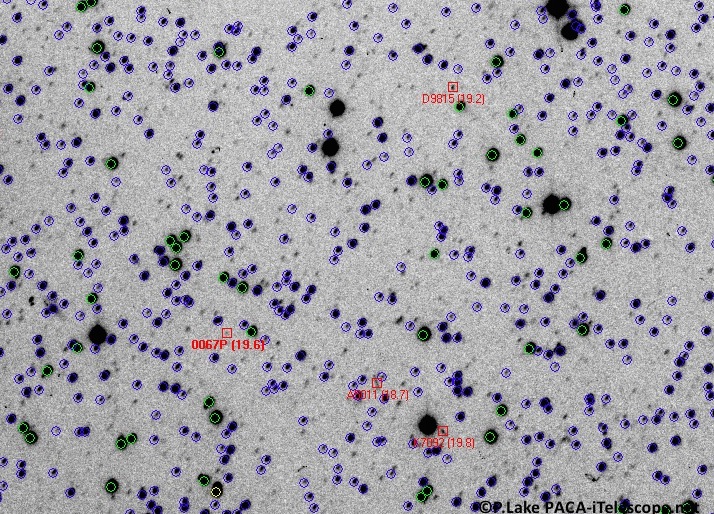 Amateur image of 67P in its 2014 apparition, captured by Australian amateur astronomer, Peter Lake, of iTelescope.net, from Siding Spring, Australia, on 22 May 2014

Amateur astronomers are usually the first observers of these objects and provide some of the earliest images and legacy observations of them. Therefore, it is no surprise that the target of the Rosetta mission, comet 67P/Churyumov-Gerasimenko (67P/C-G), with an orbit of 6.5 years, has been observed in its last few apparitions by the amateur astronomer community, even before the comet was selected as Rosetta’s target. A mission as ambitious as Rosetta will certainly re-write the books on comets by itself. So what role can the amateur astronomer community play?

As Colin Snodgrass already explained in his blog post earlier this week ground-based observations provide a complementary “global” perspective of the comet, as compared to the local environment of the comet sampled by the instruments on the orbiter and lander, in situ.

Although professional observers have access to many observatories, these observations are often restricted to short specific temporal windows due to the competitive nature of allocated observing time on professional facilities. The amateur astronomer community has the advantage of being able to observe the comet over longer time frames and without the need for competed observing time. They can also provide a global network to observe the comet; sound alerts should the comet exhibit any unusual behaviour; and provide other specific support as needed by both the mission teams and professional observers.

One recent example of excellent professional-amateur collaborations concerned C/2012 S1 (ISON), which engaged the entire globe as the comet got nearer and nearer to the Sun, and the tension mounted as to whether it would survive or not. There is also an active community following C/2013 A1 (Siding Spring) ahead of its flyby of Mars on 19 October 2014 [Editor’s note: you can find out how we’re preparing our Mars Express spacecraft for the Siding Spring encounter on our Mars Express blog].

Currently the comet is only visible in the southern hemisphere and will not be available to northern latitude observers until early next year. The comet is still rather faint and moving through crowded star fields. Southern hemisphere observers with telescopes of aperture 0.5m and larger, with deep imaging capabilities, should be able to detect the comet at its current magnitude of about 21.2. Observers with smaller aperture telescopes can participate as the comet approaches the limiting magnitude of their telescopes. Amateurs with the appropriate equipment are encouraged to contribute their observations to the group (details below), to help monitor the comet’s activity. Spectroscopy measurements are also encouraged.

Your observations can be shared via our Facebook group, PACA_67P, which brings together professional and amateur astronomers for collaboration of observations of 67P/C-G. Upon joining, you will be requested for information regarding your equipment, preferred mode of observation, location and available filters, to ensure that there is adequate global coverage of observers. You’ll also find plenty of advice from other observers! Any amateur astronomer with observations of the comet 67P/C-G in its previous apparitions is also encouraged to contact me for collecting and archiving the legacy data.