Replanning Europe’s mission of the decade: the backstory

Today’s blog post was contributed by Ruediger Jehn and his colleagues working on the Mission Analysis team at ESOC. These experts work behind the scenes on all of ESA’s interplanetary and observatory missions to map out – in the most incredible detail– every aspect of a mission before it’s launched. They ensure that the designs for the spacecraft and instruments will work together with the available launcher and intended trajectory to achieve the scientific objectives of the mission – Ed. 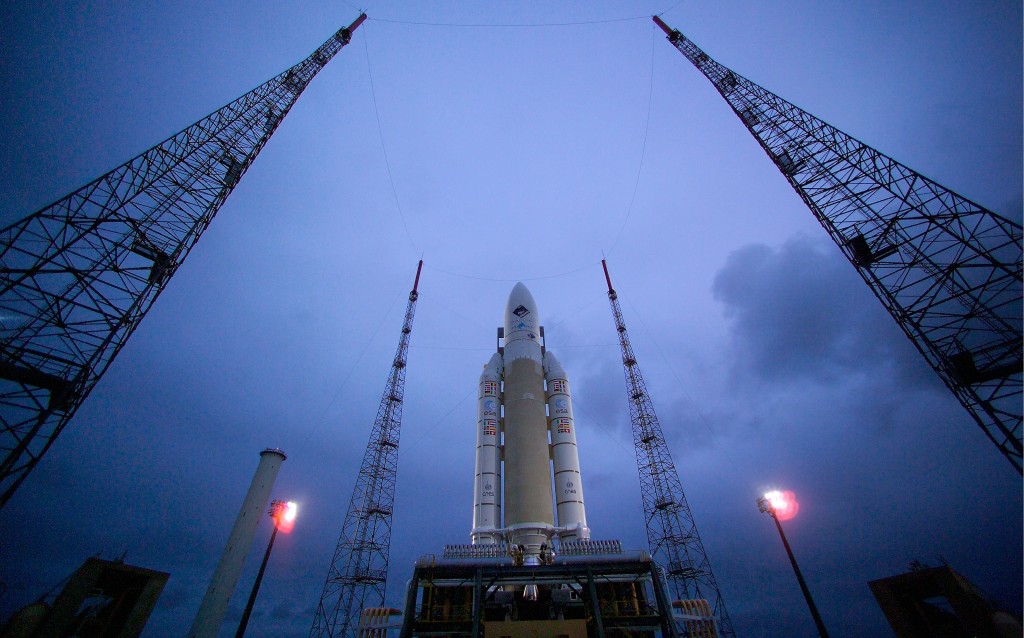 Rosetta was originally planned for launch in February 2003, to head toward a small comet called Wirtanen. At that time, Rosetta was meant to be launched into space on board an Ariane 5 rocket. Unfortunately, just two months before the launch, this rocket – a new variant – failed during the launch of two communications satellites and had to be destroyed some eight minutes after launch to minimise the risk on ground. It was clear that a detailed failure analysis was needed and that Rosetta’s original launch date could not be maintained.

The result was that Rosetta – the spacecraft on which Europe had spent almost a billion Euros – was ready to go with no ride into space, as its target comet steadily arced around the Sun, moving further and further out of reach. And there was no detailed ‘Plan B’ ready for this disaster.

At the end of 2002, ESA was faced with the challenge of quickly redesigning the mission to minimise the time that the spacecraft might have to wait in storage and take advantage of another launch opportunity.

Since the original trajectory had foreseen an Earth flyby one year after launch, it was theoretically possible to ’skip‘ the first year in space and still launch toward comet Wirtanen. But since the mission required a ‘sling-shot’ gravity assist from Earth, it would have required a more powerful launcher.

A launch six years later toward Wirtanen was also an option, but keeping Rosetta on the ground in high-tech storage for six years was not a very good idea. So it became clear that new comets had to be studied as possible targets.

There are many comets in our Solar System and the difficulty was in finding the right one. The new comet should be comparable in size to Wirtanen, otherwise the whole mission concept and the instrument designs would no longer apply. The comet also had to be reachable with a fuel budget that was compatible with the size of the tank on Rosetta (which was already built!). On the way to the comet, any step toward the inner Solar System had to be avoided in order not to heat the spacecraft beyond its design limits.

If a new (more powerful) launcher were to be considered, the spacecraft had to fit inside that launcher’s fairing, and so on. There were many constraints!

On 20 December 2002, scientists, engineers and spacecraft mission controllers met to consider over a list of target comets that remained after all others had been screened out. The short list was:

Following intense discussion, the first three options were discarded for one reason or another. A larger rocket would imply an increased financial burden; reaching comet Howell would cost too much fuel and going to Tempel 2 involved a trajectory that came nearly as close to the Sun as Venus, which engineers feared Rosetta would not survive.

The result of the selection process was 67P/C-G. Although about four times larger than Wirtanen (which will complicate the comet approach and rendezvous because the software and hardware were optimised for a smaller nucleus), none of the other constraints were violated. In the following months, this scenario was studied in detail and the complex, 10-year trajectory using three Earth and one Mars flybys was elaborated.

A short comment on this incredible pathway through space: Finding such a complex trajectory was more an art than pure mathematics. The mission analyst needs good software tools to test if his/her ideas are worth following up, but there are nearly endless combinations to check and a lot of experience is required to decide in which direction to continue searching for the solution.

The first Earth flyby is, meanwhile, almost a standard trick to increase the capabilities of the Ariane 5 launcher. And en route toward the asteroid belt, Mars is a convenient target for gaining additional acceleration. But the subsequent steps are trial and error. Thousands of combinations had to be tested using sophisticated computer modelling and the mission analyst has to steer the optimisation process towards optimum workable solution.

However, unlike in pure math, there is no guarantee that the best solution can be found and that’s why it’s necessary to involve a good team of experts.

The complexity of the Rosetta trajectory is in no way inferior to the other complex missions, such as the Voyager missions, Cassini’s tour around the Saturn moons or the US asteroid mission, Dawn, which also made use of low-thrust propulsion with a Mars flyby to finally reach Vesta and Ceres.

Today, ESA’s mission analysts are designing the next sophisticated journey through the inner Solar System: BepiColombio.

This spacecraft will have eight (!) planetary flybys before being captured by its final destination, Mercury.

Rosetta’s four highly successful flybys have proven that this is the best way to master the huge distances of our Solar System.

Rosetta is an interplanetary mission whose main objective is to rendezvous with Comet 67P/Churyumov-Gerasimenko. The spacecraft also carries the Rosetta Lander, Philae, to the comet and will deploy it onto the surface of the nucleus.

The ambitious scientific goals of the Rosetta created the following requirements: