The re-commissioning of Rosetta’s science instruments is now in its second week, and while our operations and science teams are busy with those activities, we have a quick status report on the general health of the spacecraft going into the commissioning period:

The spacecraft remains in a normal (nominal) mode and the reaction wheels continued to be exercised at low speed in order to gain experience in this domain. Towards the end of this test the wheels were all biased at around 250 RPM. 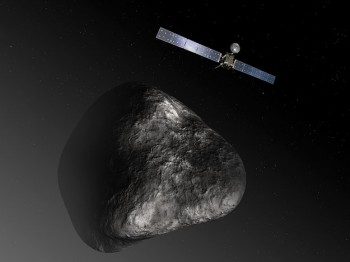 The solar array drive mechanism and the antenna pointing mechanisms are now operating in auto-tracking mode.

Power systems are all performing as planned, with the spacecraft power consumption now being monitored to be able to provide the instruments with the required margin needed for science operations.

Meanwhile, the ultra stable oscillator of RSI (radio science investigation) and the Standard Radiation Monitor (to monitor the radiation environment of the spacecraft) remain on.

Communications have been conducted via ESA’s New Norcia station and various NASA Deep Space Network stations. The one-way signal travel time today (25 March) is 36 minutes 56 seconds, with Rosetta at a distance of 664 million kilometres from Earth (on 20 January, wake-up day, the signal time was 44 minutes and 53 seconds!)

Last week’s focus was the commissioning of OSIRIS, with brief initial check-outs also scheduled for ALICE and RPC. In addition, a command was uploaded to the Philae lander to be executed this coming Friday as part of Philae’s commissioning activities. This week, eight of Rosetta’s 11 instruments are being worked on: ALICE, CONSERT, COSIMA, GIADA, MIDAS, ROSINA, RPC and RSI.

Instrument commissioning will take around six weeks. For an overview, read the previous blog post ‘Instrumental’.