The spacecraft came to within 600 km of Halley, obtaining the first close-up images of a comet nucleus. Images showed a dark, potato-shaped object with active regions that were firing jets of gas and dust into space. The flyby also revealed the first evidence of organic material in a comet, boosting the idea that comets might have delivered some of the building blocks needed for life on Earth.

But the flyby was not without drama. The first of 12 000 dust impacts were recorded 122 minutes before closest approach. Images were transmitted as Giotto closed in to within a distance of 1372 kilometres, but the rate of dust impacts rose sharply as the spacecraft passed through a jet of material that streamed away from the nucleus. Only 7.6 seconds before closest approach, the spacecraft was sent spinning by an impact from a ‘large’ (one gram) particle. Contact with Earth was temporarily lost and the worst was feared, but, to everyone’s amazement, Giotto was still alive. Over the next 32 minutes, the sturdy spacecraft’s thrusters stabilised its motion and contact was fully restored. 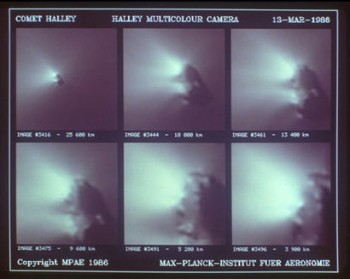 The remarkably resilient little spacecraft continued to return scientific data for another 24 hours as it headed away from comet Halley. The last dust impact was detected 49 minutes after closest approach and the historic encounter ended on 15 March when Giotto’s experiments were turned off.

Giotto would later come to within just 200 kilometres of comet Grigg-Skjellerup, on 10 July 1992, but that’s another story…

Read more in our Giotto overview.