The science and mission operations teams looking after Rosetta have been hard at work in the six weeks since wake up on 20 January 2014. The post-wake-up period ending 2 March has been mainly dedicated to the preparation of the spacecraft for the up-coming payload commissioning phase.

As for the health of the spacecraft, Rosetta is operating nominally in ‘Normal Mode’ and all platform systems have been fully re-activated. The Thermal, Power and Data Handling systems are all working. The reaction wheels – spinning wheels used to maintain Rosetta’s orientation in space – are being exercised at very low speed to characterise their behaviour in this regime.

All instruments are off except for:

On the shorter term, however, Rosetta has to first arrive at the comet. Here is an overview of upcoming activities, with the ever-present proviso that dates, times and events may change due to operational requirements:

In the meantime, Rosetta’s NavCam has been briefly switched on for a check-out; NavCam imaging for operational purposes will start in May alongside OSIRIS. 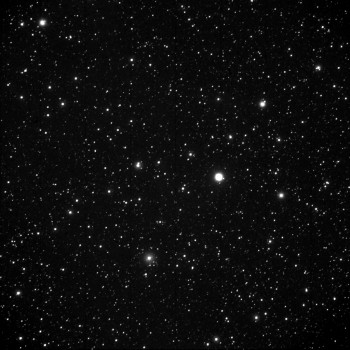 The image was acquired on 23 February 2014 and is pointed roughly in the direction of the constellation Aries (almost in the direction opposite to comet 67P). The bright star to the right of the centre is delta Arietis (δ Ari) the bright star at the top left is epsilon Arietis, ε Ari. The NavCam field of view is 5×5 degrees. Credit: ESA/Rosetta/NavCam

May will see the start of a critical series of manoeuvres that will steadily bring Rosetta in line with the comet. Currently Rosetta is on a trajectory that would, if unchanged, take it past the comet at a distance of approximately 50 000 km and at a relative velocity of 800 m/s. The aim of the manoeuvres is to reduce Rosetta’s relative velocity to 1 m/s and bring it to within 100 km distance of the comet by 6 August.

The manoeuvres will be planned for every second Wednesday (fortnightly), starting with the following:

And finally, a nice historical note!

On 2 March 2014, Rosetta celebrated its 10th anniversary in flight!

Here is part of the text of the first Rosetta Mission Operations Report issued by the-then Flight Directors, Alan Smith and Manfred Warhaut (both now retired):

Ariane flight 158 lifted off right on-schedule at 07:17:51 UTC on March 2nd carrying with it the Rosetta spacecraft on the start of its 10-year journey to comet Churyumov-Gerasimenko. The solid boosters separated as expected at 07:20 UTC, followed 50 secs later by the fairing. The first stage burn continued until 07:27 UTC and injected the upper stage and Rosetta into a coast orbit. This was the first occasion that such an orbit phase has been flown by an Ariane 5 launch vehicle and the progress of the flight was monitored with mounting tension in the ESOC control centre. The ignition of the upper stage occurred 107 minutes later at 09:14 and was monitored from a ground station in Hawaii until the vehicle moved out of contact. Contact was made again from the Galliot station in Kourou and at 09:32:36, Arianespace announced the separation of Rosetta. There was great joy and excitement in the ESOC control centre when the ESA Kourou ground station acquired telemetry signals from Rosetta one minute later at 09:34. The spacecraft status was as expected and the automatic separation sequence was seen to be in progress. The initial rate reduction and Sun acquisition phase proceeded very smoothly, and this was followed by the deployment of the two solar array panels, which was completed at 10:11. The separation sequence was completed with the Sun reacquisition. The first telecommands were uplinked from the Kourou station at 10:34.