A new round of propulsion tests for Orion

Earlier this month the same type of engine that will power Orion’s first mission around the Moon was fired up again and put to further tests at NASA’s White Sands facility in New Mexico, USA with the Propulsion Qualification Model, a replica of the flight model’s propulsion subsystem. 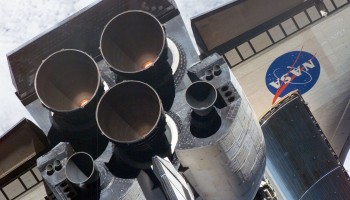 The propulsion subsystems  must be tested and qualified on Earth before it is considered fit to fly. Its main engine, the so-called OMS-E, is a refurbishment from the Shuttle programme that last flew in 2011. The video shows the engine being put through its paces in vacuum to ensure it works without atmosphere and the interaction with the rest of the subsystem is as predicted. The engine tested is not the engine that will fly to space on Exploration Mission-1, that engine is already at NASA’s Kennedy Space Center ready to integrate with the European Service Module.

Three more firings were done on 4 and 5 December for so-called delta-qualifications. As the engine was designed and used for the Space Shuttle, engineers must ensure that the engine will work as needed on the Orion spacecraft that has different requirements and is being launched on a different rocket.

The focus on these firing tests is the interaction between the engines and the propulsion subsystem as well as the performance of the pressurisation function. The propellant for the Qualification Model is provided by four 2000-liter tanks with 1-cm thick walls containing mixed oxides of nitrogen (MON) as oxidiser and monomethyl hydrazine (MMH) as fuel. The tanks will hold the propellant at a pressure of 25 bar with a total capacity of nine tonnes. The pressurisation system features high-pressure Helium tanks to push propellant into the engines.

The Propulsion Qualification Model (PQM) is a replica of the propulsion subsystem and is crucial for ensuring that all engines and thrusters fire safely and accurately to get the spacecraft where it needs to go. The OSM-E engine is one of 21 engines divided into three classes on the PQM: the primary Orbital Maneuvering System Engine (OMS-E), eight secondary auxiliary thrusters, and 12 reaction control system (RCS) thrusters. The Orion spacecraft will have 33 engines in total, double the amount of RCS thrusters than are included in the PQM.

The test team consists of around thirty people from Airbus, ESA, Lockheed Martin and NASA.