How to ship a spacecraft module across the Atlantic

The European Service Module for NASA’s Orion spacecraft that will voyage around the Moon is complete and on its way from the Airbus integration hall in Bremen, Germany, to NASA’s Kennedy Space Center in Florida, USA. The module will provide electricity, propulsion, water, air and keep systems at the right temperature for up to four astronauts after its first test flight in 2020.

But how do you pack an advanced spacecraft module for shipment across the Atlantic? First the finished module was carefully moved by crane to its transport container in the hall it was assembled in.

The container was moved by truck to Bremen airport. There are only a limited number of aircraft that are large enough to transport the Service Module that is around 4 m in diameter and 2 m high. An Antonov An-124-100 was chosen for the flight, even then the transport container only just fit inside the cargo hold with a little margin. 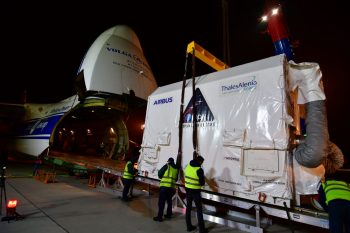 The transport container itself is an advanced piece of equipment that keeps the module in the right conditions for travel including climate control, humidity, air conditioning and so on. These are the pipes that can be seen in the picture. When moved from the truck to the aircraft mobile air bottles are attached to ensure continuation of the correct climate for our beloved module. Loading such a heavy module carefully took three hours and technicians at the airport worked well into the night to get everything ready.

The Antonov took off just before 7:00 CET (6:00 GMT) from Bremen airport but its first flight was only 17 minutes long. The aircraft landed in Hamburg airport at 07:27 (06:27 GMT) for refuelling – the Bremen airport runway is not long enough for a fully-fuelled and loaded Antonov. The aircraft continued its travels at 11:03 CET (10:03 GMT) for the actual transatlantic part of the voyage.

The first port of call in USA is Portsmouth International Airport in New Hampshire, USA. The aircraft landed after an almost nine-hour flight where it will stay overnight.

The long stopover is two-fold, the Antonov aircraft pilots need some rest after their long day and even spacecraft cannot escape customs duties. At Portsmouth, customs officials inspect the unique shipment and get the paperwork in order, down to every item. The European Service Module team have specific members who know exactly where to find everything, right down to the very smallest items. 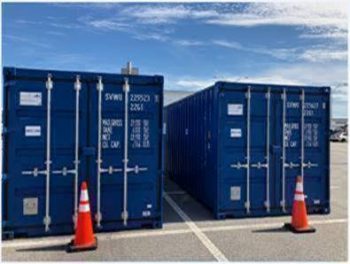 More than just the service module the Antonov shipment contains a HydroFluoroEther servicer (the cooling liquid for the module), tank protection covers, equipment to support avionics testing in the US, Meteorid and Debris Protection System panels, Multiple Layer Insulation, the European Service Module pressurised tanks filled with inert gases, consumables, hardware to fix the OMS-E engine to the module and more. Customs clearance has been coordinated in advance and paperwork was filed with customs at the Portsmouth office.

But that is not all, some parts of the Orion Service Module have already been shipped by sea in two containers and are already awaiting the arrival of the larger air shipment. The sea containers contain the OMS-E nozzle covers, OMS-E heat shield and service lines, more Multiple Layer Insulation, the container that was used to ship the OMS-E to Europe (the container will be reused for the second engine), and more. The sea containers arrived at the Kennedy Space Center on 2 November without a hitch and are waiting at the south Operations and Checkout building parking lot for unloading.

Last leg of the journey

The Antonov will take off at 08:00 EST (13:00 GMT) and land at Kennedy Space Center at around 11:00 EST (16:00 GMT), landing on the same runway that the Space Shuttle landed on, including the last Space Shuttle Atlantis mission. The main OMS-E engine on the European Service Module has previously been used on the Space Shuttle so has landed on this runway before – but then directly from Earth orbit!

More paperwork awaits the European Service Module but unloading is planned for 14:10 EST (19:10 GMT). The module will then travel to the Operations and Checkout building at Kennedy Space Center in the afternoon.