NASA’s Advanced Supercomputing research scientists, at the agency’s Ames Research Center in California’s Silicon Valley, are producing highly detailed simulations and visualisations to help keep astronauts safe during liftoff of NASA’s Orion spacecraft, which will send humans to the Moon and potential future destinations, and return them safely back to Earth.

The advanced simulation techniques are being used to predict vibrations on the Orion spacecraft’s Launch Abort Vehicle that consists of the Orion launch abort system and crew module. The vehicle is designed to pull the crew away from peril if an emergency occurs on the launch pad or during the first two minutes of flight.

The video shows an ascent abort scenario that is triggered as the vehicle is travelling at close to the speed of sound. The video starts at abort initiation with motor ignition. 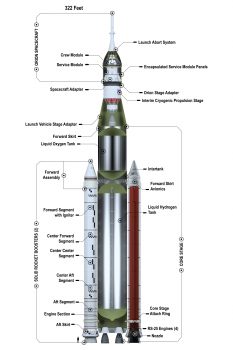 The video slows down when the pressure and air flow conditions are particularly harsh. Coloured plumes indicate high pressure (red) and low pressure (blue). Each pixel changing from blue to red (and vice versa) over time is related to pressure waves that cause vibrations on the vehicle (white). Regions where the color changes abruptly in space, but stays constant in time, indicate the presence of shock waves.

These simulations of Orion’s pad abort and ascent abort scenarios, run on the Pleiades supercomputer, are directly impacting the spacecraft’s design to increase astronaut safety and reduce uncertainty while keeping cost and launch abort vehicle weight down.

The European Service Module can also kick into action in the event of a launch abort. Orion sits underneath the Launch Abort System that propels the crew capsule up and away from danger if needed during the initial phases of launch, returning it to the ground by parachute. At higher altitudes the Launch Abort System is jettisoned and if problems arise then the service module takes over and takes Orion from its launcher and steers it towards a safe return to Earth.