Mars and Moon seen together

Today’s post was contributed by Michael Khan, who blogs on all things spacey over at Scilogs.de. He’s contributed updates to several ESA blogs in the past.

This summer is bringing some interesting Mars observation opportunities.

Nothing as mundane as a mere ‘encounter’ between our Moon and Mars was included in those suggestions, but such encounters do occur, and they do constitute great photo ops for astrophotographers. Case in point: 7 June, when only a few degrees separated the Red Planet and Earth’s companion. (Keep in mind that we are talking about apparent encounters here: the Moon and Mars appear to be in the same location of the sky, but of course, at all times, Mars will be at least 53 millions and sometimes 400 million kilometres distant).

This particular encounter was not all that close – about two and a half degrees, or five times the apparent size the Moon. But it definitely looked close, and it was a pretty sight too. The tiny reddish orb contrasted very nicely with the Moon’s grey bulk. 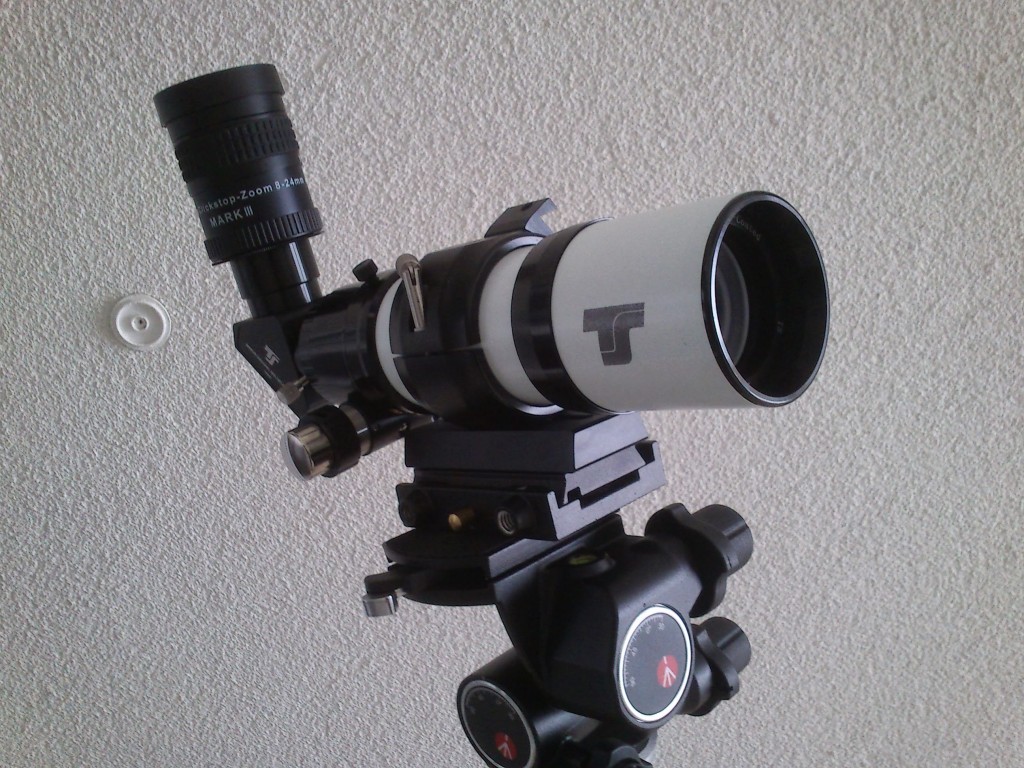 For every type of observation, there is an ideal telescope. If a large field of view is required, the focal distance must be short. Such a telescope can be surprisingly compact, as this 2-inch, 330-mm refractor demonstrates.

You need a telescope with a short focal length and therefore a wide field of view to see both objects. Anything less than 400 mm works. Some astronomers regard such telescopes as mere toys, of use perhaps as a finder scope. But there are times where they are handy. This was one such instance. You can attach your camera to the telescope via an adapter, thus using the telescope like a telephoto lens. Alternatively, if you have a good telephoto lens, you might just as well use that. The trick is to find an exposure time that will do both bodies justice, once you have your gear in focus and pointing in the right direction. You can take off the camera and enjoy the scene with an eyepiece. No problem there – the human eye can process enormous differences in contrast. But digital cameras can’t. Try a short exposure time and the Moon will come out all right but Mars will be so faint that you can barely see it; certainly you won’t be able to see its colour. Then try a long exposure time (no too long or your image will be blurred) and Mars will come out nice and red but the Moon will appear a white blob, drowning out its surroundings.In the end, you may find that getting a satisfactory picture (one that resembles what you just saw through the eyepiece), requires some cheating. Take two images – the first with a short exposure time, so the Moon looks right and the second with a longer exposure time, for Mars. Then you load both into an image processing tool on your computer (nowadays, very powerful software is available as freeware, choose the one you prefer), cut the area around Mars out of image 2 and paste it at the appropriate location in image 1. Make sure the background colours are right so one can’t see where the pasting took place. That’s all there is to it. It’s not really cheating as long as you took both images yourself and as long as you don’t hide the fact that this is a composite image. The people who make those pictures for the glossy magazines cheat a lot more than that. Anyway. What you should easily get is something like what I got, or better: 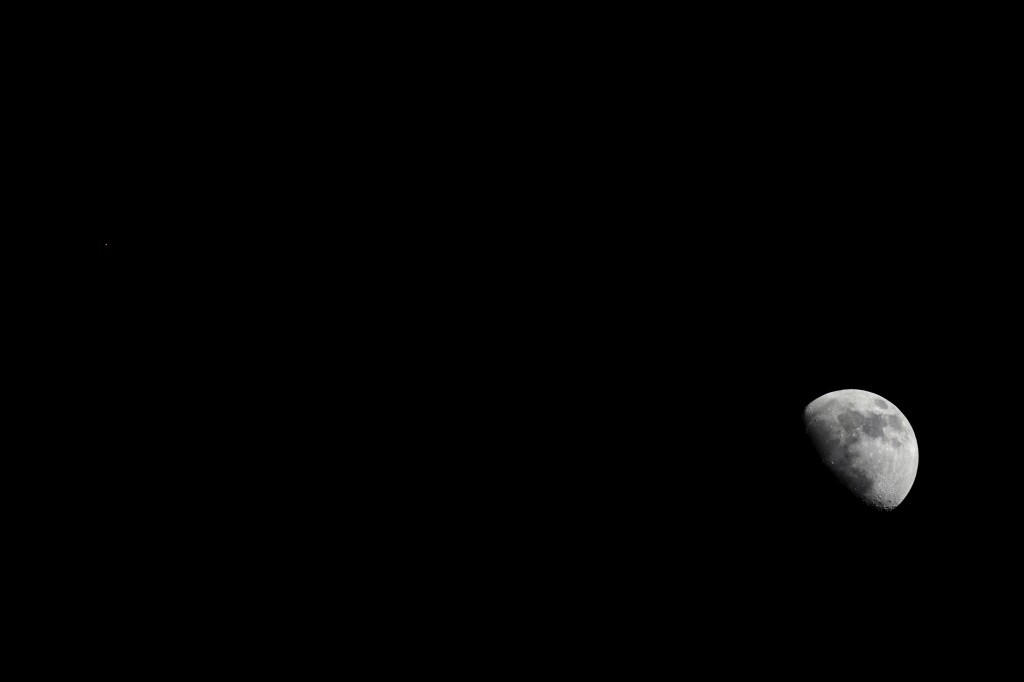 The telescope I used is a small refractor (it uses lenses, not mirrors) with a focal length of 330 mm and an aperture of 50 mm. The camera was a standard retail Canon 600D. The camera is attached directly to the telescope with a special adapter called a ‘T2-ring’ and then the telescope is mounted onto a sturdy tripod. With an ISO setting of 800, the Moon image was exposed at 1/640 s, the Mars image at 1/125 s. That’s very much like standard photography. No extremely long exposure times required. Anyone who can take a picture with a DSLR can do this. So, what are you waiting for? Go out at night. Take pictures. Just do it!