Imagine you’re playing Scrabble. The tiles on your rack don’t look as if there is much you could do with them. No vowels. Three ‘Y’s, a ‘Z’, and a ‘G’. Oh no! You might as well pass and exchange all tiles for new ones, Right?

You think you’re good at online Scrabble? Well, I just put “syzygy” on the board – see if you can beat that! Credit: E. Yourdon CC BY-NC-SA

Just look for a letter ‘S’ somewhere on the game board and you can append five of your tiles to spell the word SYZYGY (preferably such that it covers a triple word score). Thus you get rid of the ‘Z’ and the ‘Y’s and you earn heaps of points. There will be complaints around the table, but you can relax and let them complain: You really cleaned their clocks with this one. You win!

In astronomy, a syzygy defines a situation where at least three bodies are aligned. Eclipses, such as the 15 April lunar eclipse, are a perfect example of a syzygy in action.

Other syzygies, however, offer real science opportunities. Stellar occultations by bodies in the Solar System have led to very important scientific discoveries.

To name but a few:

On 28 April, MEX will be occulted not by Mars (that happens all the time), but by tiny Phobos, a roughly potato-shaped body measuring 27 km across its longest axis and 18 across its shortest (a recent low-res webcam pic of Phobos – Ed). 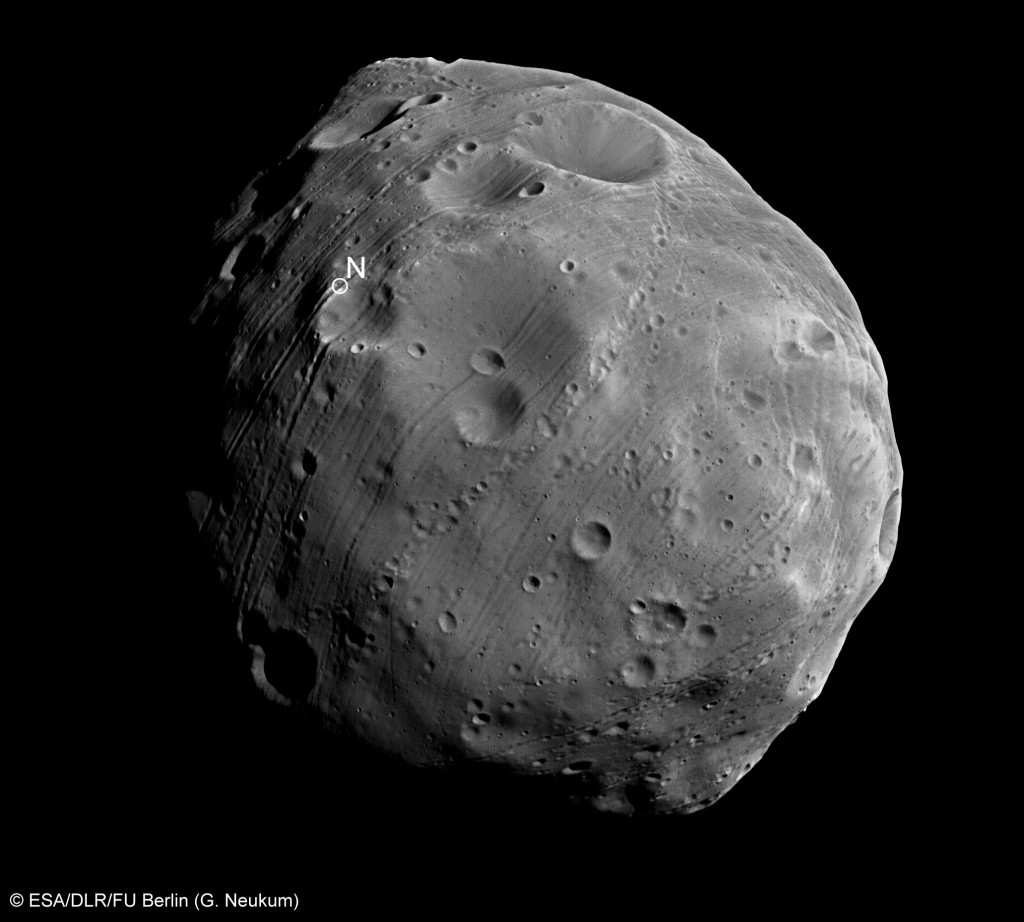 Phobos has already been imaged and studied many times by different spacecraft. There have even been (unfortunately, unsuccessful) missions dedicated to landing on this Moon and even returning samples from its surface to Earth. Currently the Russian space agency is planning another sample return mission and ESA is studying the possibility of a similar mission of its own, or a collaboration with Russia. Phobos, and its sister moon, Deimos, pose a formidable scientific enigma. There is no convincing theory of their origin that offers a satisfactory explanation for these moons’ current orbits and appearances.

As Phobos has already been extensively observed, its occultation of MEX on 28 April is not expected to yield dramatic discoveries. What we will see is that the radio signal from MEX is cut off and then reappears, around nine seconds later. But science lies in the smallest things.

Though the orbits of Phobos and Deimos are well-known, there is one orbital parameter – the semi-major axis, i.e., its mean distance from Mars – that is notoriously difficult to pin down. The semi-major axis determines the orbital period. Any uncertainty in this parameter leads to an uncertainty in the orbital period, and the problem with that is that the resulting errors add up with time, as orbital revolution follows orbital revolution. A fraction of a second becomes an error of several seconds, then of minutes, and pretty soon you’re faced with a significant difference between where you expect Phobos to be and where it actually is.

This is closely akin to clocks, which also tend to accumulate minuscule errors that end up in giving a completely wrong time, if you don’t reset them regularly. And therein lies the rub. The Phobos orbit data (ephemeris) requires regular re-setting, and re-setting requires accurate calibration data (just as resetting a clock does… in that case, another clock which you know to be accurate). For Phobos, one way of obtaining such data is by measuring exactly when it occults the signal from MEX.

We know MEX’s orbit very precisely because it is computed regularly based on data we get from the radio signals it transmits, so that is our reference. With the accurately measured occultation time, of course taking into account the time the signal needs to travel from Mars to the Earth, we can reset the Phobos ephemeris.