How to hide behind a planet

Remember those raging snowball battles you had as a child in the school yard, during recess? The best strategy, if you were in the thick of it, is to hide behind something (or someone) massive – such as a tree – or another guy on your team. The fatter the guy, the more protection he offered. 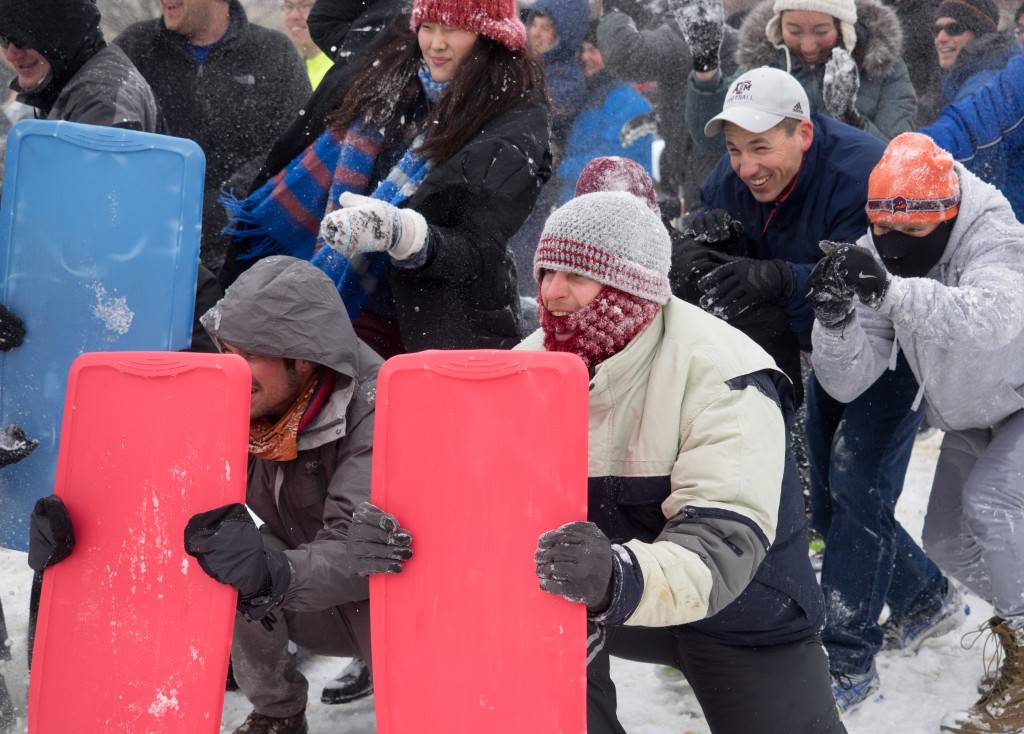 Ah, those were the days… alas, long past. Or are they?

In fact, the situation we are preparing for now, or at least the situation our spacecraft is going to face on 19 October, isn’t all that different from the snowball fights of yore, at least in principle. Well, it is true that any cometary dust particles that might have MEX’s name on them are likely to be microscopic. On the other hand, they will be travelling at 56 km/s and at that speeds, even microscopic dust can pack a hefty punch.

There are no trees in the immediate vicinity of Mars Express, but there is a rather ‘fat guy’ to hide behind – one with a diameter of almost 6800 kilometres. That’s planet Mars, of course. The orbit of Mars Express around the planet is polar, it is eccentric (during every orbital revolution, which lasts 7 hours, the spacecraft passes as close as 350 km at the lowest point of the orbit (periares, in astronomers’ parlance) and as far as 10 500 km at the highest point (apoares) above the Martian surface.

The fundamental laws of celestial mechanics cannot be infringed – not even a tiny little bit and not even in an emergency or when no one is looking – dictate that MEX moves much faster at periares than it does at apoares. Other more complicated laws of physics dictate that a spacecraft orbit is not immutable: its orientation in space and also its shape are subject to variations due to external forces, known as perturbations. Some of these variations in the orbital parameters are periodic, some are not, and you can’t do much about them.

You might fight them – for a time – by using the rocket engines aboard the spacecraft and the propellant in its tanks, but that will be effective only if you have lots of propellant – precisely the one thing that Mars Express does not have. Our arrival at Mars and positioning onto the spacecraft’s science orbit used up 90% of the fuel that was on board. After all, the spacecraft was designed for a two-year mission and it has been at Mars for more than 10. This gain in mission duration is thanks largely to the skill and ingenuity of the Flight Dynamics team in making the spacecraft perform the observations that the science team required with the least possible fuel expenditure.

By 19 October, the evolution of the orbit will be such that when viewed from the direction from which the comet will be arriving (we know this direction quite accurately and can therefore simulate the encounter with a computer), it will look like in the image below. This shows where the spacecraft would be on its orbit if we did nothing. 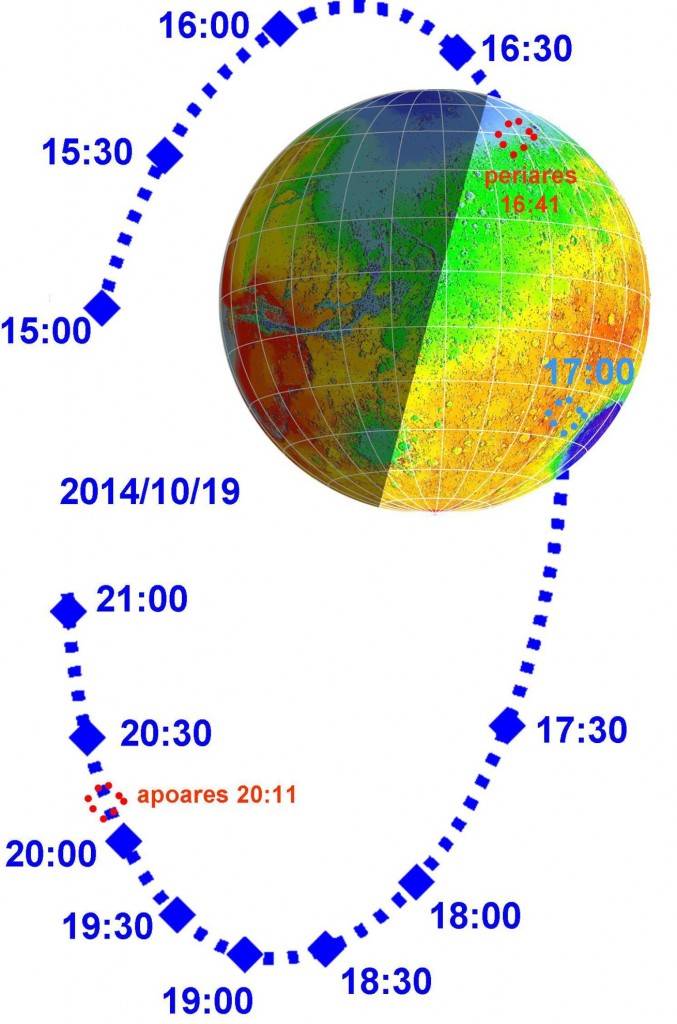 The closest encounter takes place at 18:30. This is when we expect the concentration of mostly microscopic particles of comet dust to be greatest. About an hour and a half later, Mars will pass through the orbital plane of the comet. That’s where we foresee the highest risk of being hit by larger particles. Once again, there is a trade-off as the larger particles carry more energy but there are fewer of them. Let’s assume that the danger is greatest at closest approach (although as mentioned in a previous post, more observations are still needed to improve our models of what to expect in the encounter).

The approaching comet would see MEX pass behind Mars just after 16:30, and it would reappear about half an hour later. It so happens that the time when the spacecraft is behind Mars (and therefore protected from the dust that accompanies the comet) coincides with periares. If you recall, that is when it is also moving fastest on its orbit. The fact that the spacecraft is behind Mars for only half an hour, while the passage through the dust tail is likely to last a few hours, means that this alone is not a (full) answer to our problem of how to endure passing through a comet coma. It does, however, provide a short respite from exposure to potentially damaging particles.

There is one thing we can change, however. Note that if we do nothing, then at 18:30, at the closest encounter, MEX would be in the open, far from any protection. We can at least change the time of periares such that it occurs at 18:30, not 16:41. Though we can change neither the shape nor the orientation of the orbit, we can change this one parameter. And it will cost only very little propellant.

In essence, what we need to do is to delay the spacecraft passage behind Mars by 109 minutes. That sounds like a major task, and it is, if you try to do it just shortly before the comet is there. But we won’t wait until then.

We plan to do a manoeuvre using the MEX engine already several months in advance. We can cut this delay to, for example, 109 slices of 60 seconds each. If we increase the orbital period by this 60 seconds, then 109 orbits later we have accumulated exactly 109 minutes of delay and MEX will be behind Mars when the snowballs hail down – or rather, when the onslaught of cometary dust is expected to peak.

How do we delay the arrival of a spacecraft at a given position?

You won’t believe this – it’s done by increasing the orbital velocity. Nobody ever said that celestial mechanics was intuitive, right? You know that MEX’s orbit is an ellipse. Draw a line between the closest and the farthest point from Mars and you have the major axis; divide that by two and you have the semi-major axis. Every orbit represents a large amount of energy (that’s why it takes a big rocket to launch something into orbit).

Now, if you speed up a spacecraft, you add orbital energy, and therefore, inevitably, you increase its orbital period. This is a simple physical fact, and we are going to make use of it to maximize the chances MEX has of weathering the encounter with Comet Siding Spring.

We can’t break the laws of physics but we can, and will, use physics to our advantage.