Hypervelocity cratering and riding out the risk

You know any blog post that includes the term ‘hypervelocity cratering‘ has got to relate to some pretty serious stuff! Today’s update from the Mars Express team contains the realisation that, for some of the risks associated with October’s Siding Spring flyby, there may not be much the team can do. This is as close to real-life spacecraft operations you can get without actually sitting on console at ESOC – Ed.

Last week, we considered the spacecraft structure and how it might be affected by any impact of particles – even tiny ones – from the comet’s coma.

Whilst it is clear that a particle striking the spacecraft has the ability to cause physical damage to either the structure or components, what is not necessarily obvious is the potential for it to cause disruption to the spacecraft’s many and delicate electrical units. Why is this?

As the velocity (and therefore kinetic energy) of these particles is (very, very) high, there can be electromagnetic effects resulting from these impacts too.

When the particle strikes the body of the spacecraft, not only is the particle itself vaporised, but also some of the material from the part of the spacecraft that has been struck,  an effect called ‘hypervelocity cratering’ (this has been well investigated during space debris studies in low-Earth orbit – Ed.)

This plume of vaporised material is so hot that it forms a plasma (an ionised gas) and it is this charged plasma that has the ability to cause issues for the spacecraft’s electrical systems.

Here are three examples of the type of effects we’ve been considering.

What protection do the spacecraft’s electrical systems have? 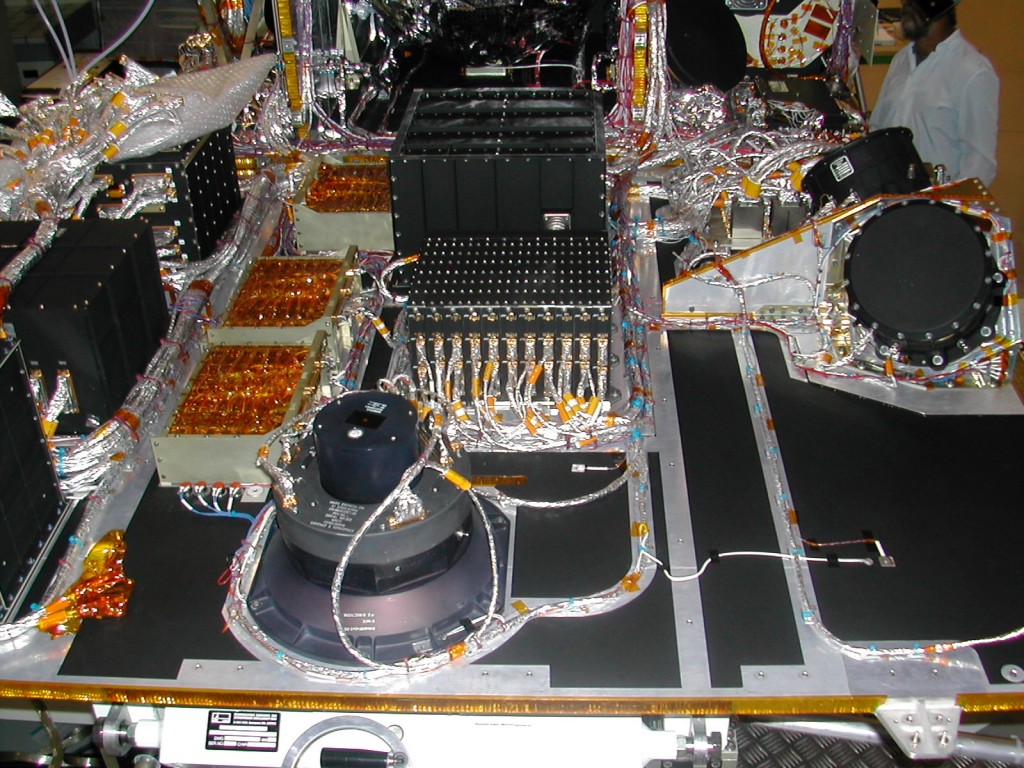 As you can see from the image (above) taken during the construction of MEX, the individual electrical units are contained in their own protective housing and the cables are all wrapped in an electrically conductive screen. This provides protection against electromagnetic (EM) effects both from other units inside the spacecraft and from external sources.

Will this protection be enough?

This appears to be a difficult question to answer…!

As noted, the spacecraft’s electrical systems have safety measures built in, but if an induced current were large enough, or the short circuit happened in the wrong place, it is theoretically possible that these safeguards could be defeated.

There is a complex interconnectivity to the electrical systems on MEX, which means that induced currents have many possible paths to take. The effects are also highly dependent on the properties of the particle impacting the spacecraft, where on the spacecraft the hit occurs, the properties of the produced plasma, which components the plasma interacts with, what state the components in question are in, &etc.

As you can see, there are so many variables governing what might happen that trying to anticipate specific problems can become almost meaningless, as adjusting any of these variables even slightly can vastly effect the eventual outcome.

The question, then, is: What can we do?

A obvious possibility is to switch units off. This won’t always protect against induced currents, but it can reduce the risk/effects of short circuits.

So if we assume that is the way to go, the next question is what realistically can we switch off?

As has been discussed in the earlier blog posts, we will be required to maintain a specific pointing during the encounter to best protect the spacecraft. And as we cannot spin Mars Express, this means the Attitude & Orbit Control System (AOCS) must be used to keep the spacecraft correctly oriented. Therefore the AOCS (and all its component units) must also be left on.

For the AOCS to function, this then requires that the main computer is also on – which means the power control units must also be on.

We cannot disconnect the solar arrays, so they will be electrically active throughout. As the Reaction Control System (RCS) thrusters may be called upon, then the thermal control systems also need to be on, so as to regulate tank and fuel-line temperatures. So as you can see, there are not a lot of units left to consider. Almost everything has to stay on!

This whole issue is one we’re actively considering right now, so we have yet to come to any formal conclusions as yet.

This is a good example of a situation in which we will likely have to make an assessment of what to do even though we don’t have a lot of data on which to base a decision and for which it would appear, at the moment at least, that our options are limited.

It is conceivable that we may decide that there is little we can do to significantly reduce the risk of EM effects and this may be something we simply have to live with.