One of the most interesting events in planetary exploration in 2014 is potentially also one of the most threatening for spacecraft orbiting Mars. This post was contributed by the MEX operations team here at ESOC and marks the start of our coverage of their efforts to safeguard the mission during the close flyby of Comet Siding Spring in October – while doing some unique science. 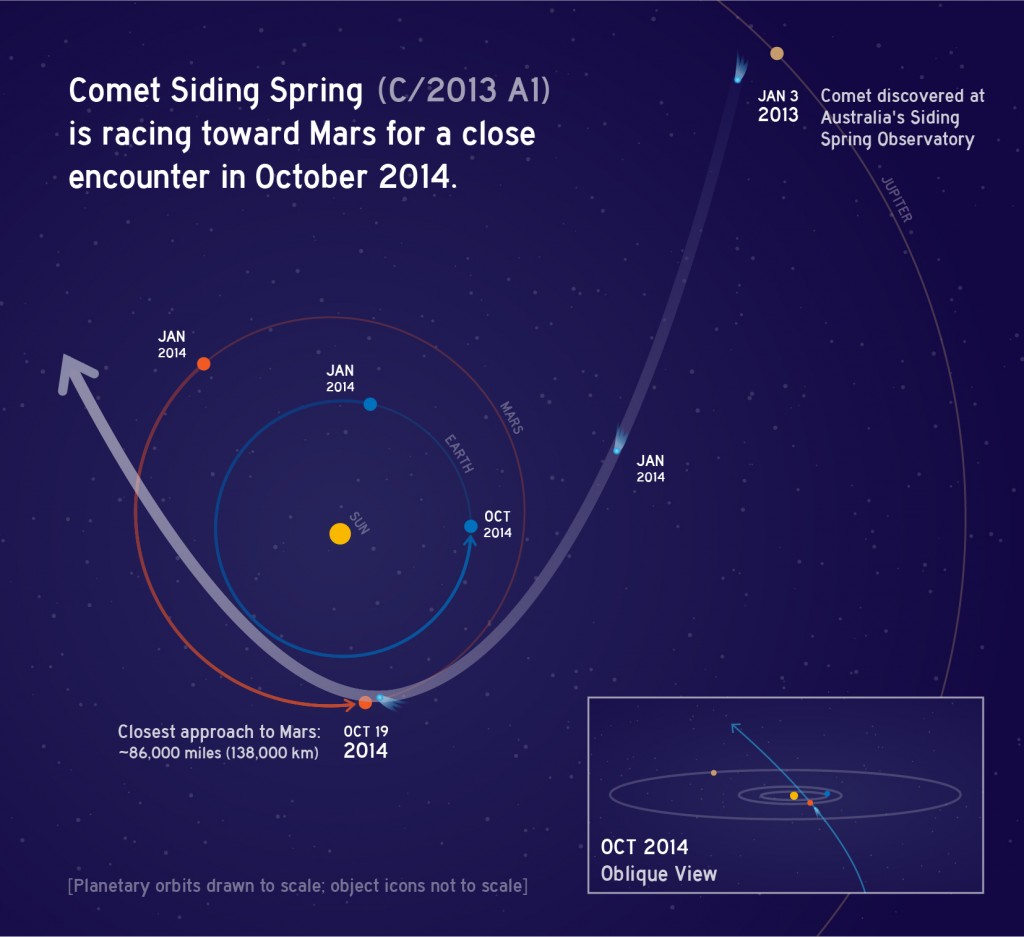 This graphic depicts the orbit of comet C/2013 A1 Siding Spring as it swings around the sun in 2014. Credit: NASA

It will be the second comet to visit the Red Planet in 12 months, following Comet ISON in October 2013. However, where ISON passed some 10 000 000 km from the planet, current estimates put Siding Spring’s miss distance at just 136 000* km from the surface.

To give some perspective, Siding Spring will approach Mars by about 1/3 the average distance from Earth to the Moon (about 385,000 km).

At the scale of our Solar System, this is a very, very close shave…

While we know the comet will not hit Mars, nor our spacecraft, Mars Express, initial observation data lead us to expect that the coma (the cloud of dust particles surrounding the comet’s nucleus) will be big enough to envelop Mars and therefore the spacecraft orbiting it.

Further observation of the comet will allow better predictions of the actual size of the coma, and the resulting level of risk to Mars-orbiting spacecraft, but this may not come for several months. Nonetheless, the mission operations team at ESOC have already begun considering ways to best protect Mars Express from the cloud of cometary dust.

At these speeds, even dust can be dangerous.

Consider that man-made space debris in orbit around Earth, where the relative velocities are ‘merely’ 7 km/second, can seriously harm satellites. The relative velocity for the Siding Spring dust particles will be about eight times faster – but the energy of an impact goes up with the square of the speed, meaning that the energy levels are 64 times higher!

Plus, it is not only the risk of physical damage from an impact the must be considered. Hyper-velocity impacts such as these can generate plasma clouds and electromagnetic pulses, which can cause disruptions with the many electronic systems onboard Mars Express.

The team have been doing a great deal of brainstorming to ‘work the issue’, and one of the obvious solutions lies in how we could adjust our orbit to shield the spacecraft behind the bulk of Mars, for at least part of the encounter if not all.

We also need to determine how can we best orient the spacecraft to reduce the exposure of instruments and critical systems to the coma and comet debris.

The team are also looking at how the many subsystems on board the spacecraft can be configured to ensure the highest possible resilience to the potential risks. Finally, given this opportunity to observe a comet as it passes so close to a rocky planet, we must co-ordinate spacecraft operations with the ESA science teams to accommodate as much science observations of this unique event as possible, consistent with safety.

Our close encounter with Siding Spring is still over nine months away, but the Mars Express team have already begun preparing for it, consulting with experts, industry and scientists and researching a complex set of details, possibilities and what-ifs.

It’s a major challenge, and even if we design and implement the best possible way to deal with the close approach, there’s no guarantee that Mars Express remains unaffected.

We’ll keep you updated here in the blog (and in the main ESA website) to share how we’re tackling these issues, ensuring that both the team and the spacecraft are ready for this incredibly challenging, once-in-a-lifetime encounter.

Siding Spring is currently around 670 million km from Mars, a distance it will cover in just nine months.

The countdown has begun!

Ed: Thanks to Andy, Kees, Simon, Luke and Michel for this great report.

Siding Spring by the numbers