James Godfrey is working this morning in the Mars Express dedicated control room at ESOC and he’s sent in this update.

[10:32 CET] NASA DSN have reported that they collected good data at their Madrid 70m station during the flyby and saw “a slight effect in the Doppler residuals, as expected.” This slight effect is caused by the gravitational field of Phobos accelerating the Mars Express spacecraft as it flies past the moon and is the signal that we are trying to measure! NASA DSN are now receiving signals from MEX via their 70m dish at Goldstone.

Now it is up to the radio scientists to examine the measurements made on the radio signals and to determine the effect of the uneven (non-spherical) mass distribution of this oddly shaped moon, Phobos, on Mars Express. 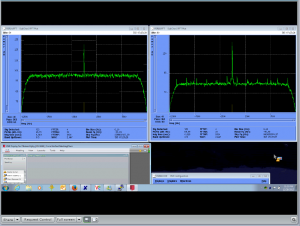 This is a screen shot from a spectrum-analyser display at NASA’s 70m DSN station in Madrid (as received at ESOC). The left-hand panel shows the S-band channel and the right-hand shows the X-band channel.

View of the signal strength coming from MEX as received via
NASA’s 70m antenna at Madrid, just after closest approach