How to get through winter in #Antarctica at –60°C? Competitive games! Concordia crew participated in the 5-base Antarctic Olympics. Did they come out on top?

“Argh, that’s the height,” says our French mechanic, throwing his arms up. He picks up the dart from the floor where it landed after making brief contact with one of the Italian books in our living room.

The mechanic gives the dart back to our Italian doctor for another try. He hits the green and cheers erupt among the rest of the team – not least because he throws with his left hand due to a tennis elbow.

With the exception of the astronomer, who was disqualified in the first round, the entire team participates in the darts competition. The top three combine their scores and the sum is registered in the competition against the second French station in Antarctica and the stations on the sub-Antarctic islands for the traditional Jeux Australiques (English: Antarctic Games)!

I don’t end up in the top 3 ­– partly because I miss a round and partly because I haven’t played darts since I was 19, when I lived in Ireland and the game ended with whisky, a haircut and the nickname Sinéad.

We end up with a score of 774, third place overall in the sport. Along with the second-longest plank score, darts ensures we are not at the absolute bottom in the standings. Until we ended up in fifth place – out of five.

Jeux Australiques is a relatively new annual event. As I have been able to find, it has been around for about three years. The different bases alternate organising the games, including the selection of disciplines and calculating the results (total time of top 3 participants for each base). This year, the disciplines were longest planks, fastest 5 km run, highest score in darts, fastest 8 km cycle and CrossFit, including sit ups, jump squats, and an awful lot of burpees – a crazy 400! 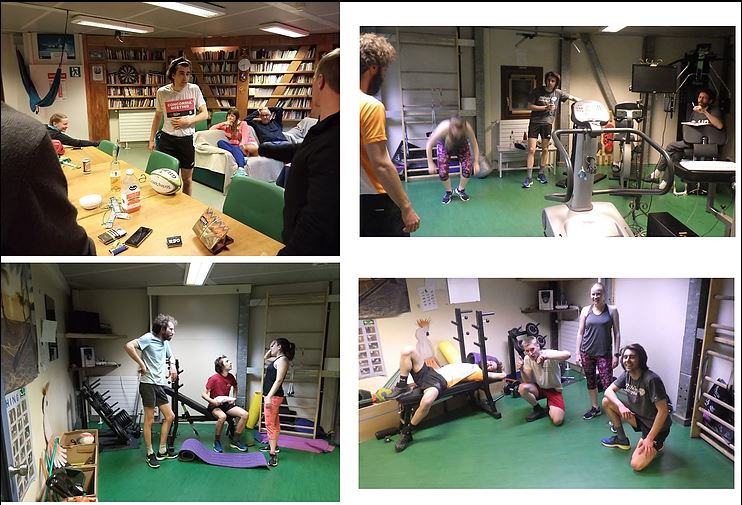 In CrossFit, performance is based on the total amount of time for a certain number of exercises, regardless of the number of participants – so when one gets tired, another can take over while the first takes a nap.

Well, last place did not quite hit us by surprise. Concordia is the only one of the participating bases that is not at sea level, and to do sports here is equivalent to doing so at 3700-4000 metres altitude, depending on air pressure. We are also a few at this base and the equipment is not brand new.

But the whole base participated and it was cool! It was actually a really good way to distract people from sun scouting and getting them to pull on their 80s shorts instead. I was the fastest at 5km, so I still feel like I won a little bit.

Our mechanic also diligently tried to negotiate modifications to the exercises because of the thin air here, with the result that some of the exercises were made easier, though unfortunately for all bases.

Had the categories been “quickest frostbite in the fingers”, “best Michelin man or SpongeBob Square Pants impersonation”, “most short of breath up the stairs” or “most near-death experiences during rescue exercises”, we would have clearly won.

Right now all the bases in Antarctica and the sub-Antarctic islands are competing for the Antarctic Film Festival, so we are vigorously aiming for revenge. You’ll probably hear and see much more about this in a couple of weeks, when the festival is settled.

During the last few weeks the twilight period has become well over an hour longer during the day, and now suddenly a narrow strip of light is already visible on the horizon at six o’clock in the morning. A few hours later, we are usually bathed in a magical blue, orange or pink light, which reappears at around 13:30 pm, but by 15:00 it is dusk again.

It is incredible to witness and experience the change from day to day. You become pretty happy being outside, at least for shorter periods at a time. It’s hard to describe and you probably have to try a polar winter to really recognise the feeling, but suddenly –60°C doesn’t feel so cold anymore.

It’s actually a bit sad, too. As the light comes back again and dusk dissolves, the magnificent nights get shorter and shorter and soon will become a memory that no 1000 photographs will ever do justice to.

I sat outside in the snow for half an hour yesterday at 5 am to take in probably the last “real” night sky. The Moon is also back in the sky now, and just that little bit of “light pollution” makes it impossible to see many of the stars.

The winter night over Antarctica has been one of the greatest experiences here, something I will take with me forever. But I am now looking forward to feeling the sun on my face.

For now, goodbye billions of stars and the Milky Way. Hopefully one day, a reunion.