For a few seconds, he resembles a Hindu god. One leg is slightly bent but firmly planted on the black plate that detects his movements. The other leg is placed over the first, while the arms are crossed over the elbows. It looks complicated but the technique works. He manages to stay up on one leg.

The subject is the station’s Italian doctor taking part in the BoneHealth study, which tracks his balance, among other things. Every two months he and the other trial participants stand on a so-called mechanograph, which is an approximately 60 x 60 cm large plate that records weight, movements and strength. The balance part of the study includes standing on one leg for 10 seconds with eyes respectively open and closed. For some this is easier, for others a lot of jumping and arm fluttering is involved.

It is not without reason that the plate is placed along a wall. There have been no injuries so far! The plate also tests muscle strength by measuring the power of three jumps and by means of a bench test: from a seated position on a 30 cm high stool, the subject must stand up with arms crossed over the chest – not unlike squats – for 10 repetitions. 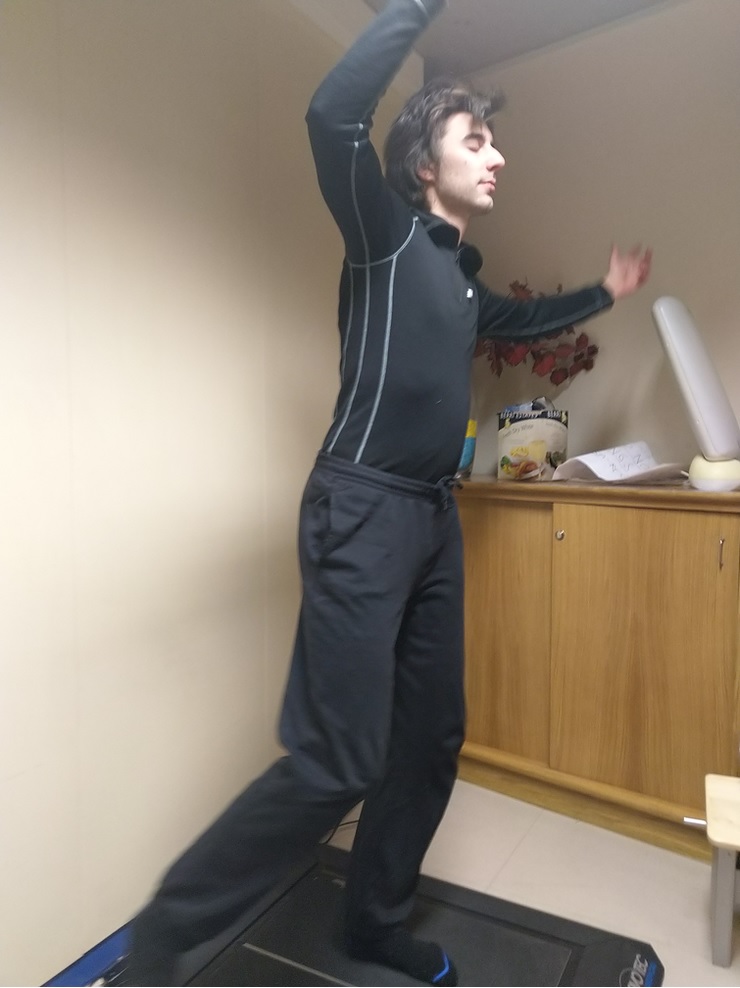 The mechanograph tests are part of the BoneHealth study, a German study, which, like Simskill, is running for its third and final year. It examines how conditions in Antarctica affect bones and muscle strength, the distribution of the amount of muscle and fat in the body, level of activity, and the amount of stress hormones, calcium and vitamin D.

The study is predicated on the theory that climatic conditions and the ensuing isolation affect our level of physical activity and our stress hormone – that is, we are likely to be less active than we normally are and probably more stressed by the isolation, the low oxygen content and the light conditions. This is even more pronounced in the long winter period, where outdoor excursions for a longer period can be fatal because of the cold.

To find out if we are really less active, the participants (so far only men) wear an ActiGraph every two months. It is a wristwatch that, unlike most sports watches today, records not only steps, weight, height and age, but also calculates how many calories are burned in a day. The watch also measures sleep and sleep quality based on participants’ movements at night. A lot of information is collected in the four days the participants wear the watch. The participants also provide monthly urine, saliva and blood samples, which I’ll discuss next time.

Another monthly study is the so-called Body Impedance Analysis (BIA) – a study of body composition that deals with the muscles.

Many of us know the body analysis machines at the gym that measure fat. The BIA works the same way: using electrodes on the hands and feet, it sends a small current through the body that you don’t feel. The current meets different resistance on its way through the body and from this resistance one can calculate how much muscle mass, fat mass, bones and fluid you have in your body.

What’s interesting is that one can easily lose weight, but it is impossible to know whether it is muscle or fat loss from a number on the scale alone. With inactivity, there is a great risk of losing more muscle mass than fat.

It’s a wonderfully easy study. My only challenge has been a couple of men who started with a fat percentage of 2% – it’s almost nothing. They have, however, gradually eaten enough chocolate for it to have reached about 3.5-4% and the machine now accepts them as human beings.

Of course BoneHealth study is, not surprisingly, about the bones.

While I, and many others, write that the conditions here in Concordia are similar to life in space, they also differ in at least two important areas: we have gravity to work with and we have, in contrast to, say, the Moon or a spacecraft, an atmosphere that can protect us from most of the radiation from space. The Antarctic plateau is thus not 100% “White Mars”, which we otherwise like to call it.

Both gravity and radiation have a great influence on bone and muscle health, so naturally they have been the focus of study since people have gone to space.

Our bones and muscles are affected by many things. First we need the right building blocks – eg. protein, calcium and vitamin D. Then they must have the right stimuli. Most of us know that muscles need to be used to become stronger.

But we don’t often consider that the same is required of our bones. Our bones experience constant degradation and reconstruction to strengthen them as well. If we are inactive, both muscles and bones become weaker as the body does not experience a strain and thus a need for strengthening.

And one of the most important strains that our body is exposed to is something that many of us probably think very little about in everyday life (when we lose something or roll out of bed, perhaps) – gravity. We must use muscle strength, balance and strong bones to keep us upright, to walk and run. So we must be able to carry ourselves. It is almost only when we are at rest that we do not need to “work against” gravity.

When the astronauts are in space, they do not have the force of gravity to work against them – they do not carry themselves – and therefore bones and muscles are not exposed to the same load and therefore lose both strength and mass. They become weaker and smaller. 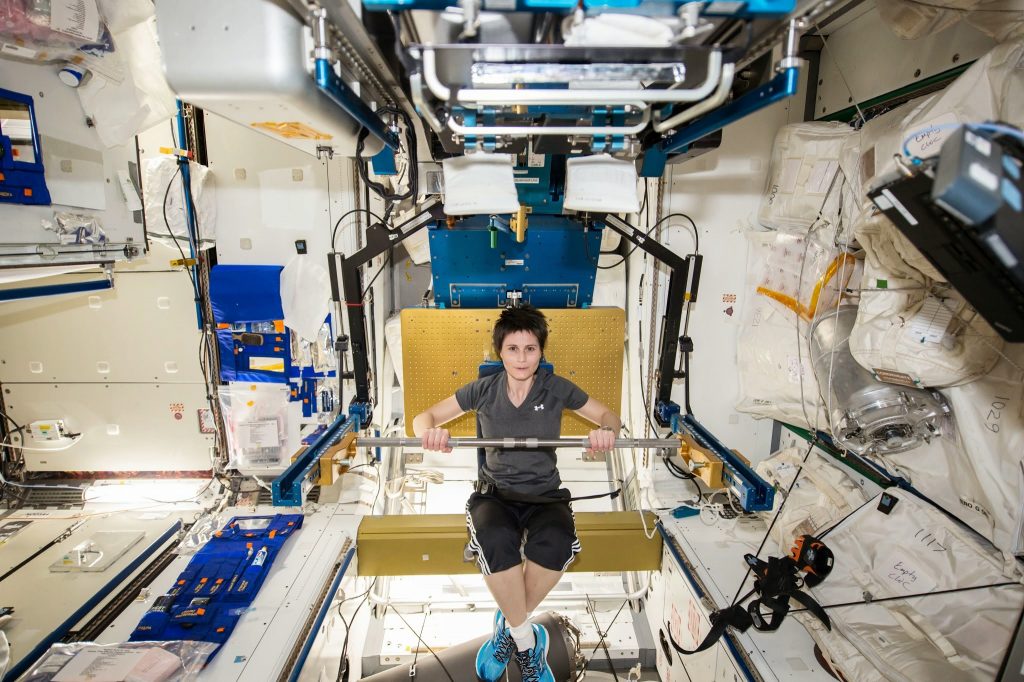 Already during the first 5-11 days in space, astronauts lose about 20% – that is, one-fifth – of their muscle mass! After a month it is 30%, or just under a third, and it is thought that for very long stays in space, as much as half of muscle mass disappears. And not only that – the muscles are changing too. Among other things, muscle fibres change type and this means that you lose muscle strength to an even greater extent than you lose muscle mass.

It is especially the muscles that we use to keep us upright that are affected – that is, the lower body, and back and abs. Of course, this is a problem whether on Earth or Mars. If you lost so much strength that you cannot get out of a space capsule or keep yourself upright, this will inevitably cause problems.

So you do everything you can to avoid this degradation. Astronauts get the right “building blocks”, i.e. diet, but also various forms of exercise that need to keep bones and muscles straight.

Because there are so few people going into space and therefore so few to study, researchers imitate the conditions in bedrest studies. It is really simple – you put your subjects in a bed and leave them there for the duration of the study – it can be months, if the goal is to study effects of long term spaceflight. 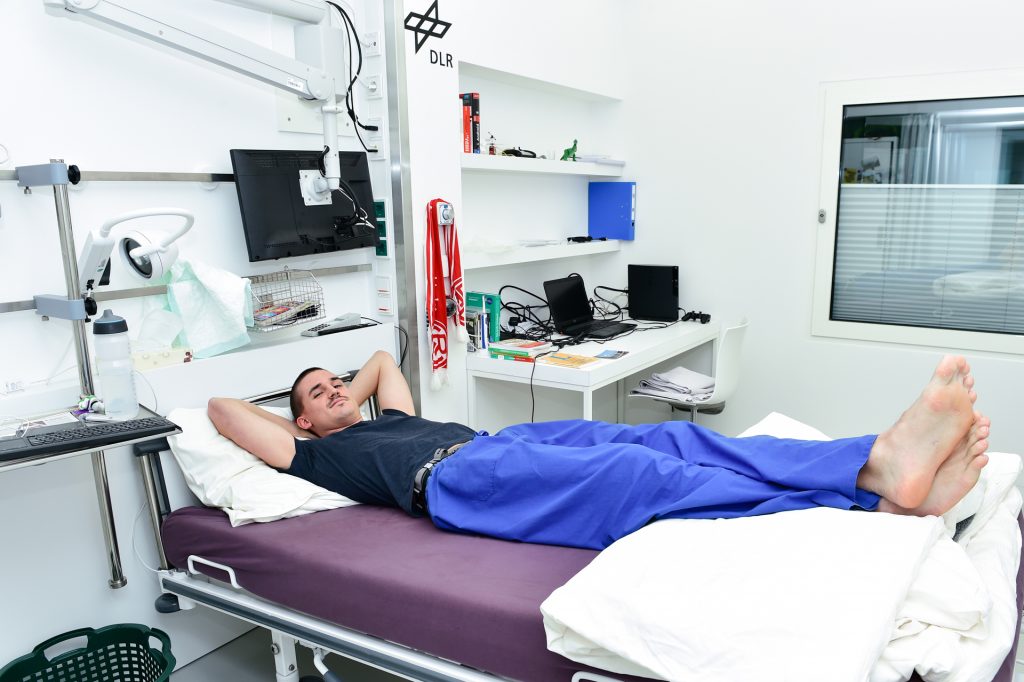 Sometimes the experiments are even carried out with the head tilted slightly downwards to produce the same effect on the cardiovascular system as in space. It may sound nice to get paid for staying in bed for a few months, but you can’t stand up to pee or eat! And as you probably gathered already, it has quite a large impact on the body and it takes time to recover. But it is considerably easier and cheaper to investigate people if you can keep them on the ground.

Subjects in bedrest studies are “allowed” to test different forms of exercise and how they counteract the negative effects of the lack of gravity. The astronauts on the International Space Station do approximately two and half hours a day of exercise and it is important that the exercise is as effective as possible. In addition to treadmills and bicycles (the astronauts are attached so that one can mimic some of the weight load they experience on the ground), there are also different weight systems where the resistance can be adjusted to enable strength training.

But, you might be wondering that the BoneHealth study is conducted neither in space nor in bedrest, so what’s the relevance?

Studies like BoneHealth, which cannot remove gravity, can help give insights on how other factors such as physical activity, or lack thereof, stress, diet, and lack of seasons can affect muscles and bones – both alone and in combination.

To read Nadja’s adventures at Concordia in Danish, see her personal blog. Bonus for the faithful readers in the form of pictures from Concordia.