It's not all fun and games at Concordia research station, even if the research does require you to play some games. More on simulations, motor skills, and handling samples in –80°C in this blog post. 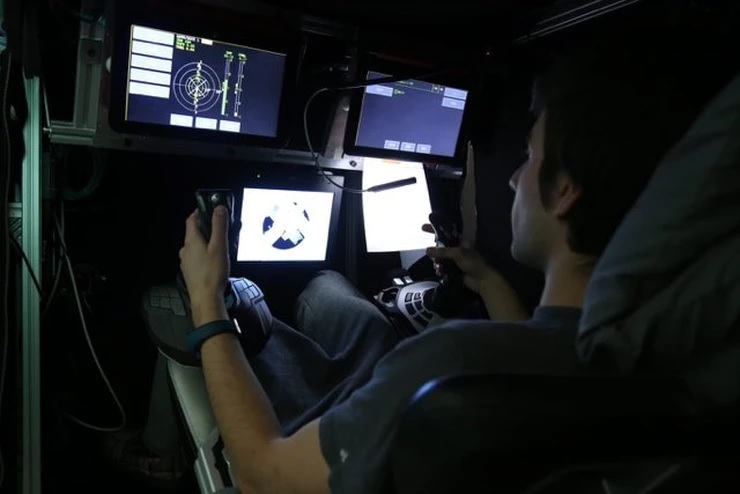 I lean farther and farther to the left. It does not help. I try to keep a neutral expression on my face and grit my teeth, partly to stop myself from giving a helpful tip.

A few minutes later it is over. The Soyuz module has hit the right docking port on the International Space Station, but was turned 90 degrees to one side. In other words, it crashed.

The Russians are not happy.

My French colleague is frustrated and expresses it in French phrases for a short while and I try to ask, pedagogically, whether he is aware of what went wrong. He is not. I explain and illustrate with an empty glass that does not resemble a Soyuz in the least, and finally he breaks into a big laugh. He had probably wondered why I suddenly leaned all the way to one side.

We are in a room with shelves of duvet covers, extra pillows, UV lamps and an iron. I use an empty aluminium case as a desk. The Soyuz simulator is a few computer screens and a (comfortable) car seat with joysticks that have been built into a mini climbing frame.

We are on our fourth month at Concordia and my research duties are in full swing. The Soyuz simulator, which my colleague tried this morning, is part of a project called SimSkill that examines the ability of Soyuz pilots to fly the spacecraft over time.

My colleagues (and test subjects) are divided into two groups, one group flying once every four weeks while the other group flying every 12 weeks. The curiosity for how one pilot ended up on fire is high. My French colleague describes, with great arm movements, his collision with the International Space Station – illustrated with a rendition of my gradual leaning left, to the left…!

Others tell similar stories of spectacular crashes and are teased across the dinner table. The enthusiasm and perseverance when sitting in the pilot’s seat is also high. Some reliably control the Soyuz module in under ten minutes, others struggle for up to half an hour with gritted teeth and not always great results, while a third have developed a very special ‘Top Gun’ technique of crashing towards the target, braking (and sometimes reversing a bit), before finally bringing the module safely “home”.

I don’t have to help along the way, but I do sit by a monitor to watch and intervene if software or hardware issues come up. It’s sometimes difficult to keep quiet when the scenario fails from the start because the pilot forgot that he or she must also start the engines.

But overall there are some skilled pilots at Concordia!

The simulator flight is only part of this project. There are coordination and reaction ability tests that requires participants, among other things, to hold a pen in a small 4 mm hole for 30 seconds without touching the walls and move different-length pins from one board to the holes in another as quickly as possible. They must do this first with the right hand, then the left and finally with both hands simultaneously. 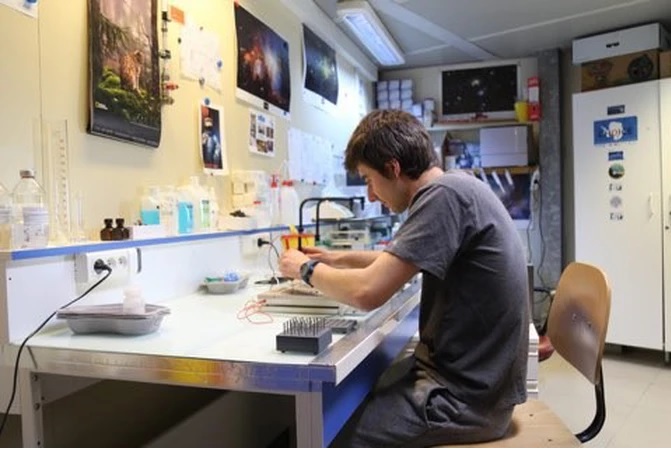 In addition, there is a monthly cognitive test, in which memory, empathy, logical thinking and responsiveness are tested. Some of these tests are definitely more fun than others. In one, you must (virtually) inflate balloons, and if you stop before the balloon bursts, you win money. The system is difficult to figure out, as the balloons burst at widely different times, but it at least inspires the child in everyone to come out and play, unlike the empathy and memory tests featuring extremely psychedelic images.

Last but not least, there is a questionnaire on sleep quality, since part of the research group behind SimSkill are the same ones who conduct the sleep studies referred to in previous posts. These questionnaires are to understand, among other things, how sleep quality affects one’s cognitive abilities and not least one’s pilot abilities, and find any connections between them.

In fact, one researcher is contemplating increasing the oxygen content of the air when astronauts sleep in space to improve sleep and counteract some of the negative effects caused by oxygen deficiency and poor sleep.

Here at Concordia most people are still affected by lopsided rhythms, frequent waking or poor sleep. Some still wake gasping for air, which for the most part happily passed for me after a couple of weeks.

In the corridor between the two main buildings hangs a screen showing current weather conditions. In fact, it is just opposite the exit, so every time you go out, you can find that… it is cold.

We are now below –80°C and relating to the numbers on the screen is difficult. It is so cold that sometimes you just have to force a smile – especially when you receive warm greetings from Marrakech (where it is 29°C!). 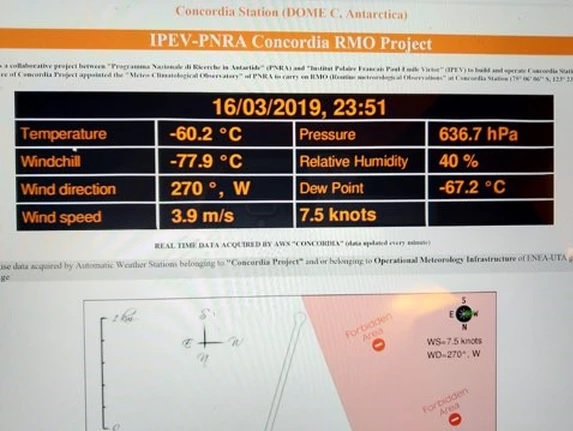 I sort samples for the research projects outside in one of the containers, where I distribute the samples in small cardboard boxes, which are stored in different aluminium boxes. Currently, I have to do this in full polar gear, which has made this tricky.

First of all, I can’t take off my goggles anymore, as my glasses freeze because of the moisture in my exhaled air. And if I don’t wear glasses, I’m blind as a mole and risk falling down the stairs, which doesn’t seem like a long lasting solution to my problem.

It’s too  cold for my fingers to handle the samples only with my battery-heated inner gloves.

It was okay at –50°C, but everything has a pain limit. Now I use 3 sets of gloves and mittens when I stand out in the container. The inner gloves with a pair of gloves is fine for the “rough work”, such as opening the large boxes and moving the small boxes out. But when I have to move the small tubes I can only use my inner gloves, until the cold creeps through and my fingers begin to grumble and I have to stuff my hands in a pair of down sacks attached to my belt and then wait until my fingers are warm and happy again.

It takes time, but it works. I have learned the hard way to not try to do such precision work with the shell gloves we are given. Losing one of the cardboard boxes with three months of samples, then having to crawl around the metal floor and find all the samples and sort them – while still outside – is just not worth it. It is the ultimate Monday morning!