Water on land and in the air

Water is essential to life but in remote places like Antarctica it must be carefully extracted and efficiently reused. Learn more about how Concordia Research Station recycles its water.

Dr. Nadja Albertsen is the ESA-sponsored medical doctor spending 12 months at Concordia research station in Antarctica. She facilitates a number of experiments on the effects of isolation, light deprivation, and extreme temperatures on the human body and mind. In the following post, Nadja walks us through a day in the life of Concordia.

It has just dawned on me that I have not experienced rain for sometime. If you must name a place where the sun always shines and the sky is always blue, it is Concordia – at least in the summer.

So far one of the best conversations at dinner was about there having been clouds! (Imagine that, Danes!) The highest temperature so far is  –25.9°C, in other words a quiet summer. But it can still be difficult to assess whether the red spots on people’s faces are sunburn or frostbite. It’s usually the latter.

Clouds, wind and sun aside, water is vital to our existence. Also in Antarctica. We must bathe every so often, wash our clothes, and of course, coffee can’t be brewed using beer.

You might think that the cold outdoors provides some level of sterilisation (like putting lice-infested blankets in a freezer), but I’m no longer sure that theory holds in practice. At least I tried to use the method as an attempt to make my running shoes smell better, but I don’t think the result was convincing.

And while, like me, one might think that absolutely nothing can survive in these dry, cold, UV-rich surroundings, the research has actually shown that this is not the case. Investigations of Concordia’s so-called “clean areas” (places where one must not add to, take away, or in any way contaminate the snow) found that there are actually a few interesting microorganisms. They are not only bacteria that may been transported there via the air, but also some that are part of the snow and thus the area’s ecology. Fortunately there is no sign of E. Coli or but more peaceful kinds of bacteria such as cyanobacteria and water bacteria. (See Luigi Michaud’s “Snow Surface Microbiome on the high Antarctic Plateau” for further reading on this topic).

All this is a prelude to my function as water inspector at Concordia. If there is something we do not dream of here at Concordia, it is bacteria in the water. Concordia has a fine water purification system, sponsored by ESA, known as the Grey Water Treatment Unit (GWTU).

This past autumn I toured the premises of Clermont L’Herault in Montpelier, the company behind the unit, and got to try out a small model of the system, the size of a Space Station rack. Here in Concordia the water purification system fills two large rooms.

The system captures the ‘grey water’ from showers, washing machines, drinking water fountains and recycles around 80% of it. In addition, the system also processes ‘black water’, which is toilet water that is converted as much as possible into grey water and then also recycled. The recycled water is not, however, used as drinking water. We get our potable water by melting snow from non-polluted areas.

The system is under a lot of pressure during the summer, with 70-80 people using about 70 litres per person according to our weekly report; despite its size, the system can accommodate around 45 people. This means that baths must be short and preferably taken between 6:00 and 10:00. This is because, should the system overload and require one of the technicians to suit up and solve the problem, they prefer to do this during the day.

The high consumption also means that water quality must be checked more frequently in the summer, every two weeks, while in winter it is every three weeks. And this is where I come into the picture.

The GWTU system consists of a lot of tanks and pipes that collect water and send it through a ceramic filter where it undergoes osmosis twice. Osmosis is a rather clever technique that the human body also uses. In osmosis, fluid is drawn through a membrane, which only allows particles of a certain size to pass. On both sides of the membrane are dissolved substances or particles that cannot be transported through the membrane and these determine how much fluid is drawn from one side to the other to achieve equal concentration of particles on both sides. If there are more particles on one side of the membrane, the liquid will be drawn to this side.

Once the water has passed through the various types of filtration, the procedure ends with UV irradiation to kill the last bacteria and impurities. The water should now be ready for reuse. It sounds quite simple to test the water, but it is actually a larger set up.

The water samples are taken with the help of the station plumber, who ensures that all taps are cleaned according to protocol and that the water is taken from the right places at the right times. He also ensures that extra attention is paid to water that is bottled, frozen and sent back to Europe for further analysis. 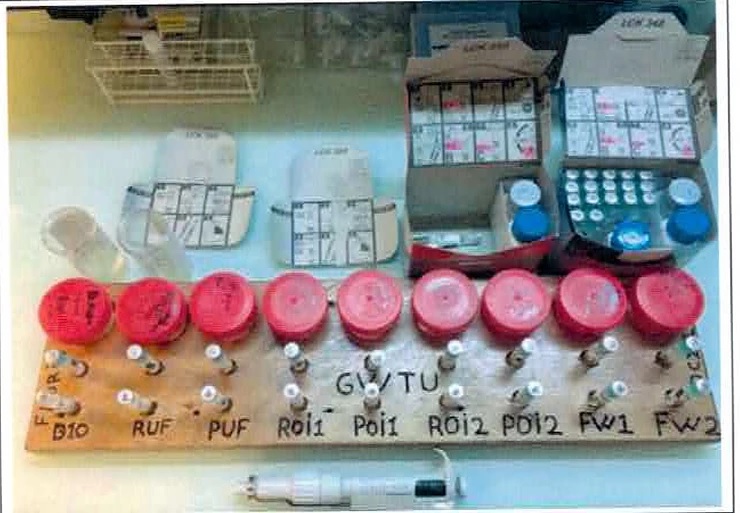 My predecessor three seasons ago built a handy wooden tray to make testing easier. The tray holds a cup of water from the taps in the water purification system as well as the reagents used to examine ammonium and phosphate content in the water (you can also check for other things if needed). Additionally we also test for conductivity and acidity as well as bacteria in the samples from the drinking water.

We have two methods to check for bacteria. In one method, water is poured through a filtration system that captures bacteria. The filter is then transferred to a petri dish, a medium is added to make bacteria visible as they grow, and finally the petri dishes are placed in a 35°C incubator, a temperature at which bacteria are happy. I then check the dishes after 24 and 48 hours, and hopefully spot no growths. It is not a cumbersome process as such, but a process with many steps.

Of course, I try to keep everything as sterile as possible, but it is not always easy on my own. For this reason, another method called Aquapad is used. Aquapad is still in its test phase, but it has been tested so far on the International Space Station.

Aquapad is a simply a petri dish already inlaid with medium into which one can spray 1 ml of the water for testing and incubation. There are considerably fewer steps and therefore less risk of contamination. We primarily use the first method, but make use of the second to double check the results.

The whole process of draining water, doing the various studies, and last but not least cleaning up afterwards takes up to five hours. And did I mention it can smell funny? Some of the water samples are taken quite early in the recycling process and have a nice, cloudy grey colour or a suspicious yellow one.No one ever makes the mistake of tasting it!

We all know water can take not only liquid and solid forms but can also be gaseous, like steam. And as we have all experienced before, you can see your breath when it’s cold. This is because water in exhaled air condenses, that is becomes drops when it meets cold air. Cold air cannot carry as much water in gaseous form as hot air can. And so it follows that one might expect a huge cloud of vapour when you exhale water-saturated air in –50°C temperatures of Concordia, but that doesn’t happen. In fact, what you can see is extremely modest – unless you are standing close to the base or a snowmobile is passing by. Our Finnish colleague John who studies particles in the atmosphere explained that in order for the vapour to condense so that we can see it, it requires other particles like aerosols that aren’t plentiful in Antarctica. In the case of the snowmobile engine, the aerosols come from the pollution caused by combustion.