Dr. Nadja Albertsen is the ESA-sponsored medical doctor spending 12 months at Concordia research station in Antarctica. She facilitates a number of experiments on the effects of isolation, light deprivation, and extreme temperatures on the human body and mind. This is a summary of her original blog post written in Danish. 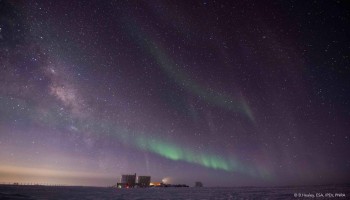 Winter is coming. The number of people at Concordia is down to 34, which makes it seem a bit empty and quiet. The temperature has been more or less constant around –45°C to –58°C last week. Recent months have brought new acquaintances and friends, and it has been an absolute pleasure. Meeting these people is another advantage on the now very long -list of amazing opportunities that come with this job. I still pinch myself daily, for being so lucky and privileged.

Some of the researchers held presentations on their research. We have had talks about the micrometeorite project, about space weather (which I hope to write more about later, when we start to see the night sky), exoplanets, deposits in the ice from prehistoric volcanic eruptions, and clouds. They are very kind to take the time to convey their work, so I decided to return the favour.

Biomedical research may feel a bit like a niche area here in Antarctica, but I am the researcher with the largest office in the station. I am the only person who does biomedical research here, but the others are very interested in the work, not least due to the most eye-catching of “gadgets”: the Soyuz simulator. 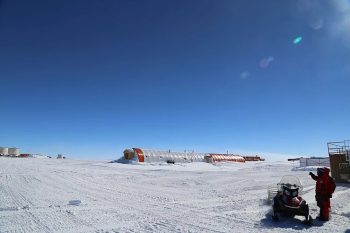 Sometimes I think my colleagues think that all I do is take blood samples the whole day. The poor DC15 participants, if that were the case – they would soon start to look a little pale from all the blood taking, even though as a reaction to the thin air, you actually produce more red blood cells (more on this in another blog post).

I gave a presentation on the five research projects for which I collect data they deal with psychological or physiological responses to isolation and altitude – viewed from different angles. We look at changes in the immune system, in genes, and in the bacterial composition of the intestines as well as how muscles, bones, physical activity and physical coordination changes (if at all). One project investigates psychological signs of stress and stress hormones, while another project looks at how our body’s react to the thin air – both acutely and over a long period of time.

There were many good questions from my audience and a great willingness to participate in shorter projects. I added more “ideas for research” post-its on my wall.

I also shared some of the published research that has come from Concordia.

Since we are only between 10 and 15 people that stay here every winter, research in Concordia takes time. Scientists need  a certain amount of data to produce a reasonably accurate result, so most projects run for around three years before the data is processed and articles are written and published. Many of the publications deal with sleep. Sleep, or lack of it, is something that resonates with many of us. The amount of hours we sleep and the number of times we wake up during the night is something we are very aware of and something we constantly talk about. It is also one of the lessons learned from year to year – last year, for example, many residents did not sleep more than three hours a night – all winter! Interestingly, the extra waking hours often resulted from discovering creative abilities the crew did not know they had before coming to Antarctica.

A study (1) of a group of people who spent a summer in Antarctica showed, among other things, that both sleep rhythm and the secretion of the sleep hormone melatonin, the body’s own sleeping pill (some may know from antidepressant medication) is disturbed. People not only felt that their sleep is worse, but results of polysomnographies, in which activity and sleep phases are recorded, also showed that the sleep phases take place in the “wrong” order during their stay in Antarctica. At the same time, melatonin was no longer excreted in the evening or at night, when they made the most sense, but in the morning around the time the participants got out of bed. So it is quite reasonable to say they were tired and needed an extra cup coffee. On the other hand, questionnaires showed that their symptoms of depression were lower than those of the participants in Germany to whom they were compared, and they generally felt more energetic and courageous.

So people in Antarctica may be tired, but they’re also happy and enthusiastic!

Studies of overwintering in Concordia, compared to the French base Durmont D’Urville, which is located at sea level (2) showed shorter, less restful sleep at Concordia. These results point to the fact that it is not so much the isolation, the cold or the working and living conditions that affect sleep, but that the altitude and thin air probably play a greater role in sleep disorders.

Perhaps because the thin air affects how you breathe. Breathing very quickly followed by slower breathing or even shorter breaks is called periodic breathing. A research group (3) studied this, and it turned out that some of the people in Concordia had up to 160 of these episodes per hour during the night (the normal average is 65 for a healthy human being) and that no regularity occurred during their stay. These episodes can affect the quality of sleep and the length of sleep.

Interestingly, however, there was very big difference between the subjects, so perhaps some people are more physiologically suited to breathing thin air than others. Finding out why this is and who it affects more requires more research.Something that can improve a night’s sleep is fresh fruit (this is not scientifically proven though!)

After a couple of weeks with no transport to and from the base, a week ago, finally, activity returned. The lorry-caravan from the coast arrived with two giant containers of frozen food, along with flights bringing people to and from the base. Not only did we receive fresh fruit and carrots but we also enjoyed some good physical exercise. The containers with frozen food had to be emptied, and they contained just over 8 tonnes of food – 30 of us lined up in front of the base, and after an obligatory 15 minutes of chaos, while we worked out a strategy, we formed a row and transported the food into the base. The whole session took just over six hours with some people dropping off the chain along the way (other work, sore backs, frozen fingers). I promised my parents that as long as the electricity does not fail (which it does not do), we will not starve!