Minerals of the world, unite!

Imagine you are on Mars and you stumble upon an interesting rock. The colours, the shape of the crystals and the place where you find it all tell you: there is more to it than meets the eye. Tool in hand, you analyse how light scatters through it. Seconds later you read the following description on the screen:

Jarosite is a potassium and iron bearing hydrated sulphate. It crystallises with acidic groundwater and rain, volcanic hydrothermal activity or from evaporating water. Attention – it may be related to signs of life.

You quickly understand that you have an important sample in your hands.

On Earth, jarosite is a rare volcanic mineral formed by interaction with water. It has been detected on Mars both by orbiting satellites and rovers, and became some of the first evidence that water once existed on the Red Planet.

This is not science fiction, but an example of how humans might explore the geology of other planets and asteroids in a not so distant future. ESA is working to equip astronauts with a geologist’s eye to see, feel and understand the building blocks of our Solar System. 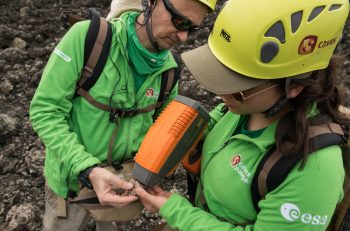 Two hands, one rock and a portable tool for analysis. Credits: ESA–R.Shone

“Humans are good at gathering information from the environment and making decisions on the spot,” explains Loredana Bessone from ESA’s space training team.

She is also leading the efforts of the Pangaea course on planetary geology, collecting rock samples and assessing the most likely places to find traces of life.

“We are creating a library about the origin and formation of minerals. We want to help future explorers identify and understand the relevance of the rocks they collect in the field, especially if they are on their own with no support from ground control,” explains course director Francesco Sauro.

The library of minerals Francesco refers to is being built by a team of leading European planetary geologists and young scientists. After looking at scientific literature from the Apollo era and data from Mars missions, the team decided that a collected database of how light refracts through minerals was missing. They began their hunt for information on how to identify minerals based on their spectral analysis across large collections and museums in Germany. The goal is to create a database of all known rocks and minerals on the Moon, Mars and meteorites surfaces for easy identification. 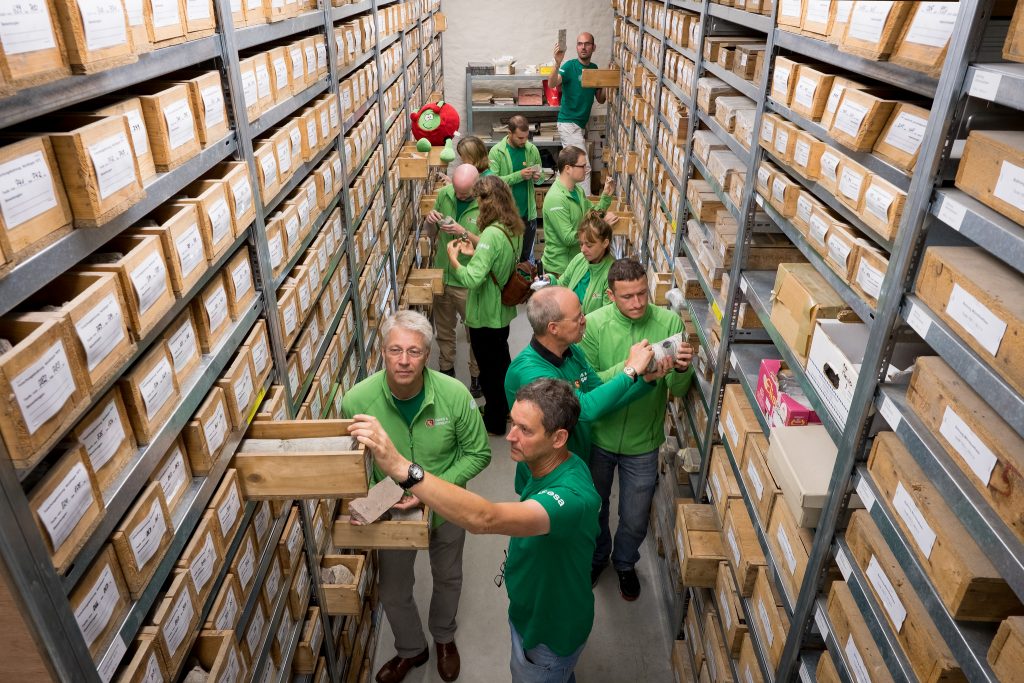 Pangaea participants in a lab with a collection of rocks at the Ries crater museum. Credits: ESA–S. Sechi

There are around 4500 minerals known on Earth, but we still know little about other worlds in comparison. Over 300 minerals have been identified in meteorites. The number of minerals identified on planetary bodies is smaller, and mainly detected by orbiting satellites – around 130 on Mars and 80 on the Moon.

“We realised that quite a few spectra were missing. Our spectral hunt paid off and we managed to double the number of lunar spectra,” says Igor Drozdovskiy, Pangaea’s supporting scientist. Our library already has 100 minerals in its catalogue, and this number continues to grow.

There are other libraries of minerals in the world that are continuously updated. However, the idea behind this one is unique.

“Our library is not just a repository of spectra, names and formulas – it is a decision-making tool. The minerals’ descriptions allow users to understand faster what they are looking at and decide where to look next and how,” explains Francesco.

The library will inform astronauts which tools to use to detect and analyse minerals. Pangaea is already putting these concepts to the test during geological expeditions.

Coming up: an electronic field book.