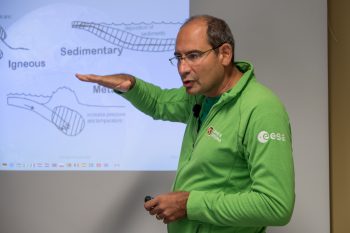 Professor of structural and planetary geology Matteo Massironi can create the story behind a comet 400 million km away from Earth by analysing its layers. He is allowed sneak previews of the images captured by European space missions to Mars, Mercury and Jovian satellites to offer a first analysis. Matteo has a great deal of experience in how satellites read the surface of a celestial body.

Matteo always comes back to the mountains however. As Pangaea scientific coordinator and instructor he loves scrutinising the stones he finds along the way. “I need to stay in touch with the rocks. Even when I am deeply involved in space missions for planetary exploration, I still go back to the field. Earth is the only real analogue we have at our disposal,” he says.

He knows well the geological features of North Africa and South America, but it was during his work as a field geologist in the Italian Alps when he began working on satellite remote sensing. He got in touch with engineers and astronomers involved in space missions.There was a need for a geologist to interpret craters, rock-layers and other geological features to unearth more information about asteroids and planetary bodies. This was back in the 90s, and a decade later his career shifted from the mountains to space.

This is the third time Matteo joins Pangaea as an instructor. He trains astronauts to understand what they see from different angles, from panoramic views to close-ups of a surface. The geology of the planets, how to recognise a meteorite and what volcanic processes are will be part of his lessons during Pangaea.

“Astronauts and geologists must learn how to communicate and achieve scientific goals together,” he says. His goal is to get scientific answers efficiently during space-like exploration activities, “a real challenge since the operational side of things was totally new to me as a scientist.” 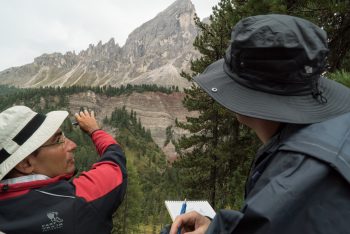 Reading the landscape of the Italian Dolomites. Credits: ESA–M. Bernabei

But not only astronauts take part in the campaigns. Matteo has to teach scientists and engineers as well. They all have different backgrounds, forcing him to continuously adapt his way of teaching.

“I have learned to simplify the geological vocabulary and find a common glossary. Pangaea not only improves my skills in teaching, but also gives me the opportunity to learn from other instructors and get in touch with professionals from other fields,” he adds.

To know more about his views on planetary exploration, read Matteo’s earlier post on the blog.