Geology and rocket science, what do they have in common? For starters, they are both incredibly exciting and result in ground-breaking discoveries. When engineers and scientists join forces, the results can be skyrocketing. To quote the man whose legacy is single-handedly the reason for my career choice, Gene Kranz once said, “when we came together we were greater than the sum of our parts”. Whether for a Moon programme or for training to prepare for future exploration missions, this rule is valid.

Over the past couple of weeks, our trainers – a.k.a. Europe’s crème de la crème in the field of geology – have been tasked to enlighten four engineers about Earth’s rocks, its outcrops and all its geological wonders from a scientific perspective. Each day we had the pleasure of stepping into the shoes of a geologist, and to view the world around us through their eyes. Looking at rocks will never be the same again, and I will tell you why.

You know how you can pick an aerospace engineer out of a crowd? Simple. You look for the person who is oriented towards the sky, the person who tracks any flying object, analyses contrails and guesstimates the type of engine during a fly-over. Now imagine four of them spending two weeks looking down rather than up. Trust me, they needed a good reason to change their perspective – and our trainers sure gave many. 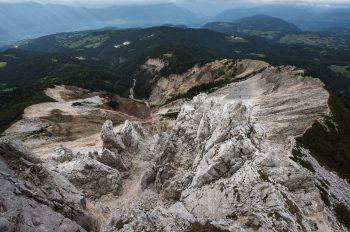 Walking down breath-taking outcrops in the Dolomites, I started off by simply observing how the scientists would gaze at the beauty of the rocks around them. It did not take long before this resulted in the realisation that essentially these rocks together form a database of historical events and each provides us with a piece of a puzzle, which – if interpreted correctly – enriches our understanding about our planet. Each rock tells a story, and its history can be read by studying it layer by layer. It has changed over a journey in the magnitude of millions of years, and endured many events throughout that time.

Our lessons learned – the lessons will continue in Lanzarote in November – are priceless for future exploration missions. We have the privilege to learn from one unique planetary body called Earth while preparing ourselves to beyond its orbit. Here, we can practise and learn to work up to an excellence to apply our knowledge on the Moon, Mars and beyond. Geology and rocket science – I believe – will together propel us to places yet unexplored to answer questions perhaps yet undefined.