The science of CAVES: Microbiology 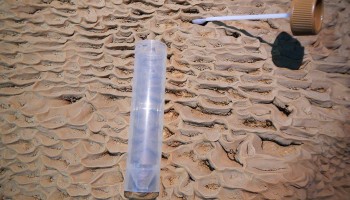 Microbiology in caves
Microbes are an essential part of the biological chain and are literally everywhere. They have been found in the most extreme places on Earth, living in high temperatures on the sea floor and even deep in Earth’s crust. Caves are no exception.
The microscopic world in caves has already delivered new species of microbes that base their survival in this dark and starving world on carbon, nitrogen or sulfur cycles. Many of these microorganisms cannot be cultivated and may only be discovered through DNA analysis.
Samples for microbiology can be taken in different places in the cave, on walls, ceilings and floors.
Operational scenario
Samples can be collected in three different ways with different vials:

In all cases, samples have to be taken in sterile conditions (don gloves, sterilise tools with Kim-wipes and a lighter). The Red capped thin tube are used to swab material from the cave’s walls or from rocks or floor (where material is scarce). No tools are needed (use the tube’s cotton swab).As much material as possible should be collected. 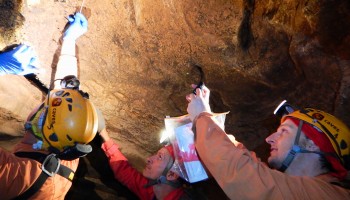 The brown capped tubes contain liquid to preserve molecular cell constituents, and should be filled with the sampled material (sediments, organic looking material) using the tube’s plastic spoon or sterile tools. To get anaerobic samples, some tubes have small Eppendorf tubes with cystein attached. On anaerobic sampling the powder of the attached eppendorf tube should be added to remove oxygen.
Data about the sampling spot and on sampled material should be recorded in a field book. Samples should be stored at low temperature for laboaratory analysis.
Things to keep in mind
Cave microbiology is a rather recent science, and technological advances allow for increasingly sophisticated analysis of DNA. This caused scientists to find several taxa of microbes, not yet known to be found in caves and most of which cannot be discovered with traditional cultivation methods. Several of these microorganisms are adapted to nutrient-poor environments and use biological cycles based not only on carbon, but also on nitrogen or sulfur. Some can even live on rocks only (chemiolithoautotrophs) and are extremely interesting from a space exploration perspective. Some of these species might also deliver new chemical substances that can have antimycotic or antibiotic activity, and may lead to the development of new medicines. 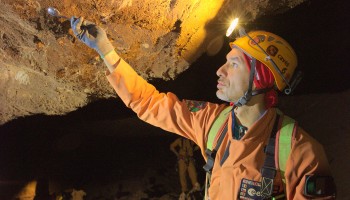 Note this research has never been done before in Sardinian caves, making this one of the most promising science programmes in CAVES.