Sirio looks like a character from a science-fiction movie, and I sometimes suspect he could be from another planet. He looks like an alien when he crawls around in the dark, appearing suddenly with his bright lights like stars, illuminating the darkest of caves and turning them into a golden scene in a baroque theatre.

He could also be Eta Beta, or Archimede, with his inventions and ingenious constructions. You need to be an Italian caver to appreciate his PettiCasco, his CoraZaino and his PreservaTutto, although this picture to the left can give you an idea.

Sirio is always happy, he has always a smile on his face, and he always has brilliant ideas, which he puts into his videos.

Colleague Vittorio often improvises to catch the moment whereas Sirio is the planner, the director, the storyteller, and the light choreographer.  He has an innate sense of humour and a vivid imagination, which he proudly injects into his productions. 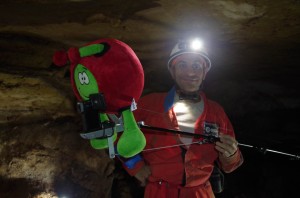 Sirio came into the team for the first time in CAVES 2011. With Vitto they make for a fantastic team. Together they have to provide a set of good pictures per day, and a video every two days, which they record during the day and edit in a tent in the cave in the evening. They use a laptop and a set of batteries, which beep in the silence of the campsite late into the night.

CAVES would not so visible in pictures and would only exist in the memory of those who participated if Sirio did not capture the most salient moments with Vitto and package them into short stories. He will film a broken stalagmite as if it was a docking space vehicle, or the concretions of a cave as if it they were a survey from a remote sensing satellite.

If you have missed his CAVES videos so far, here they are:

You may also want to check this one, which last year won the European SpeleoTV Context