An abrupt awakening!! Cloudy skies, rain and then back into a storm. We had officially navigated out of the Tropics and into the Southern Ocean. The water temperature had dropped from 24 to 17 degrees Celsius. We had entered the South Subtropical Convergence Zone!! From the deep blue waters between 10 and 35° South, we had crossed over the boundary between the South Atlantic Gyre and the Antarctic Circumpolar Current into green waters. The Subtropical Convergence (STC) is the frontal zone which separates the sub-Antarctic waters of the West Wind Drift from the subtropical waters to the north. In this region there is a convergence, or ‘piling’ up of water, from the current in the surface mixed layer that becomes sub-ducted into the oceanic thermocline. These dynamic processes combine to form strong temperature gradients and south of the front these water masses become highly mixed, bringing up nutrients from deep. As nutrient rich water is mixed upwards into the sunlit upper ocean, spectacular phytoplankton blooms form.

Large phytoplankton blooms attract an abundance of fish that feed on the plankton and in turn, a plethora of mammals and birds. During the campaign we saw a range of Dolphins, including Commerson’s and Magellan Dolphins, whales such as Humpback and Southern Right Whale, Wandering and Grey Headed Albatross and Petrels including the Giant Petrel. In these waters, the deployment of the rosette and CTD to 2000 meters showed evidence of Antarctic Intermediate Water (AAWI) at 1000 m, that had migrated northward from the sub-Antarctic front. Mid Antarctic water is characterized by a salinity of 34.2–34.4 psu, with a density range of 1027.2–1027.3 kg m−3 AAIW is an important component of the global heat, freshwater, carbon budgets and the global overturning circulation. The composition of nutrients and dissolved organic material within the water body changes as it migrates northward.

In the overlying surface South Atlantic water there was evidence of photo-oxidation of dissolved organic material as a result of the intense irradiance in the Southern Ocean and an increase in carbon dioxide (CO2) concentration in the surface waters. With an increase in the CO2 concentration in the atmosphere from the burning of fossil fuels and land-use change, the oceans are absorbing approximately 30% of the CO2 from the atmosphere. When CO2 is absorbed by seawater, a series of chemical reactions occur which result in an increase in the concentration of hydrogen ions and a reduction in carbonate ions. This process causes seawater to become more acidic by reducing its pH, a phenomenon known as ocean acidification. The projected increase in ocean acidification is predicted to result in a decrease in global mean surface seawater pH of 0.3 units below the present measured 8.1 to 7.8 values. Carbonate ions are the building blocks of many organisms in the ocean such as oysters, clams, sea urchins, shallow water corals, deep sea corals, and calcareous plankton. A decrease in carbonate ions can inhibit the growth and development of calcifying organisms. Since other animals depend on these calcifying organisms, if they are inhibited or reduced, other organisms further up the food chain will also be affected.

This area is known as the great calcite belt where the chalky white phytoplankton known as Coccolithophores are abundant. Coccolithophores are composed of calcium carbonate armoured plates and are an important component of the marine calcium cycle and the biological carbon pump. Due to the composition of these plates, they are negatively affected by ocean acidification. In the ESA funded project AMT4OceanSatFlux, global algorithms that can be used to study ocean acidification from space are being developed and evaluated using the high spatio-temporal resolution underway measurements made on AMT29. Vas Kitidis from Plymouth Marine Laboratory (PML), UK, has developed an automated instrument to measure the pH of the ocean as RRS Discovery navigates across the Atlantic Ocean. Researcher, Andreia Tracana from the University of Lisbon who is taking part in the AMT4OceanSatFlux phase 2 campaign is running the PML pH system on discrete samples from the rosette to determine ocean pH over depth. These measurements will be used to refine ocean acidification algorithms developed by Dr Peter Land at PML.

Andreia Tracana from the University of Lisbon analyses the pH of discrete water samples over a depth of 2000 m. (PML)

The stormy nature and high winds in the South Atlantic Convergence Zone, results in large waves, white capping and high sea spray. Water masses that out crop at the surface and carry different chemical compounds can shed these to the atmosphere via sea spray. These can include persistent environmental pollutants that originated from industrial processes on land, and through airborne pollution fall out over the ocean.

Postdoctoral researcher Jana Johansson and PhD student Bo Sha who are participating in the AMT4OceanSatFlux campaign are investigating the water-to-air transfer of persistent organic pollutants via sea spray aerosols. They are looking for a class of compounds known as perfluoroalkyl acids or PFAAs, which are a subclass of the highly fluorinated chemicals. PFAAs have been used in fire-fighting foams and the manufacturing of fluoropolymers. PFAAs can be toxic to and bioaccumulate in wildlife and humans, affecting immune function, metabolism, neuron development and can cause cancer. PFAAs have been shown to be abundant in the world’s oceans, and that sea spray aerosols can potentially re-release them back to the atmosphere. Jana and Bo are using a sea spray chamber to generate sea spray on the ship to analyse for PFFAs which will help to understand the role of sea spray aerosols in the global transport of PFAAs. 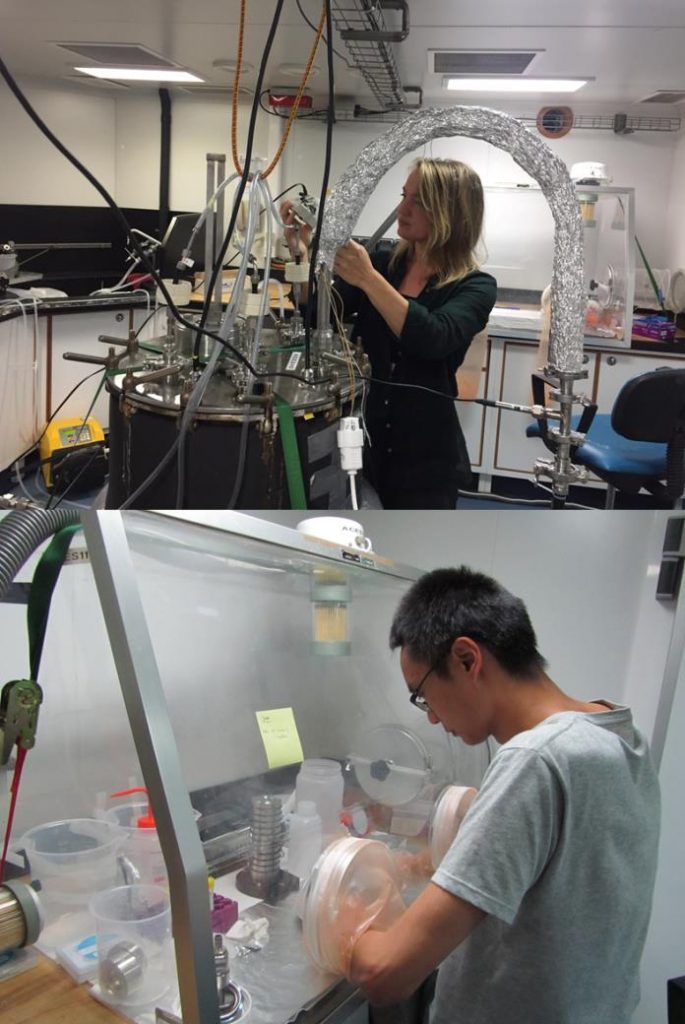 The Southern Subtropical Convergence zone is difficult to access by ship and is sparsely sampled. The ESA project AMT4OceanSatFlux enable the collection of vital data for developing products from satellite to estimate the CO2 flux from the ocean and ocean acidification parameters.