The first results from measurements taken on the ice during the CryoVEx campaign show that the sea ice between Canada and the North Pole continues to get thinner.

One of the objectives of the CryoVEx campaign was to observe how snow and sea-ice thickness varies along a CryoSat track from the coast of Canada across the multiyear ice zone into the first-year ice further north.

A week after this part of the CryoVEx campaign was completed, data processing has progressed and we can present some first results. These will be invaluable for CryoSat and IceBridge data processing by the various data product groups, for assessment of the state of Arctic sea ice after an exceptionally warm winter, and for initialising predictions of summer ice conditions.

Arvids Silis making snow thickness measurements with a magnaprobe. The EM sled in the foreground and the tail tip of Twin Otter is in the far distance. (C. Haas)

At 12 Twin Otter landing sites between 83N and 87.1N, we gathered 36.7 km of electromagnetic (EM) ice- and snow-thickness data and acquired some 13 000 snow-thickness measurements. EM soundings were calibrated with drill-hole measurements. Data were edited to remove any bias due to thinner snow and ice conditions in the immediate vicinity of our landing sites, which were mostly on refrozen leads. Our results represent conditions on thick, old first- and multiyear ice floes typical for the wider regions around the landing sites. 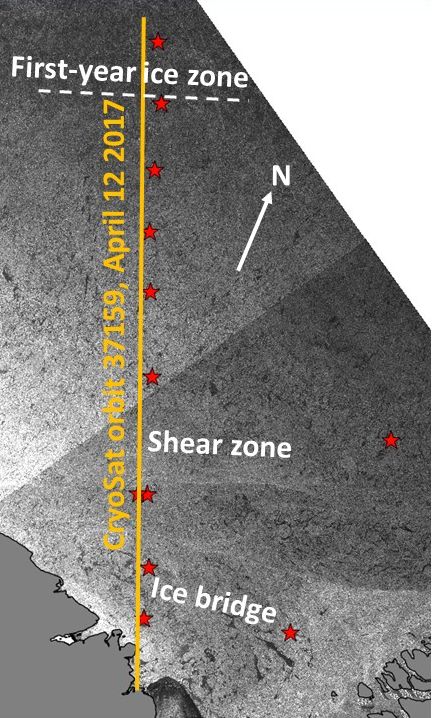 The figure below shows that mean ice thicknesses ranged between 2 and 3.4 m. The thickest ice was found in the vicinity of a prominent shear zone between an ice bridge in the Lincoln Sea (between Ellesmere Island and Greenland) and mobile pack ice to the north. The thinnest ice was found furthest to the north, representing second- and old first-year ice. The results show that the objective of fully crossing the multiyear ice zone was successfully met. 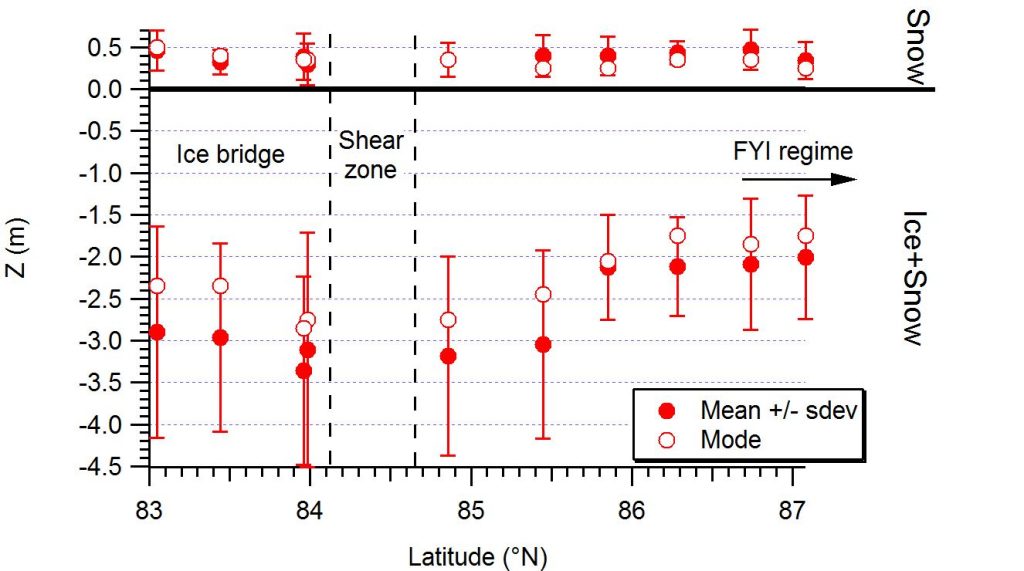 Modal thickness is the most frequently occurring thickness representative of thermodynamically grown level ice. It ranged between 1.8 and 2.9 m, including 0.25 to 0.4 m of snow (see below). The multiyear ice thickness was little different from measurements at the same latitude during previous CryoVEx campaigns in 2011 and 2014.

It was 0.2 m thinner than in 2014, but of the same thickness as in 2011. Second- and first-year modal ice thicknesses ranged between 1.8 and 1.9 m. This is thinner by 0.2 m or so than may be expected from previous airborne measurements, which indicated second- and first-year ice thicknesses of around 2.0 m in the same region. There are no representative in situ measurements to compare with.

The top portion of the figure shows that in contrast to the ice, snow thickness varied strongly and no spatial trends were observed. Mean and modal snow thicknesses ranged between 0.3 to 0.47 m, and 0.1 to 0.5 m, respectively. On average, the snow thickness standard deviation at each site was approximately 50% of the mean thickness.

Even with thick snow conditions, bare shallow hummocks without significant snow cover did frequently occur. Average snow thickness was within ±0.05 m of the Warren snow climatology, but with strong site to site and local variability.