Today, 14 April, is a down day, the airfield is closed for Good Friday. While we would rather be out sampling the ice, the down day gives us a chance to consider the data we have collected so far in more detail.

Yesterday, the complete CryoVEx sea-ice team loaded into the Ken Borek Twin Otter and took off for Site 4. The weather didn’t seem to be very good but the pilot, Troy, identified a few sites that we could try to reach.

Flat light and cloud cover made finding a suitable landing site difficult as there was reduced contrast and it made the surface look darker than it is; this in turn makes the ice appear thinner.

Many of the potential landing sites we examined with the plane were not suitable because they appeared too thin, were too small, or were large and appeared thick but also too rough to land.

There was also lots of low cloud at Site 4 further reducing our ability to find a suitable location to land. We abandoned trying to reach Site 4 and moved on to Site 5, but again faced the issue of flat light and few suitable landing locations.

After searching for more than an hour, the pilot finally found a safe landing site – a thick refrozen lead near a large multiyear ice floe. Because of the cloud cover, the air temperature at the station was some 10°C warmer than the yesterday. Unfortunately, the wind was stronger.

With our colleagues from BAS/DTU we completed a full site with extra MagnaProbe snow depth and drill-hole ice thickness measurements. We also deployed a MetOcean ice tracking buoy. At each site, Josh King from Environment and Climate Change Canada has been taking detailed measurements from snow pits – looking at the structure, density, grain size, temperature, and salinity of the snow. 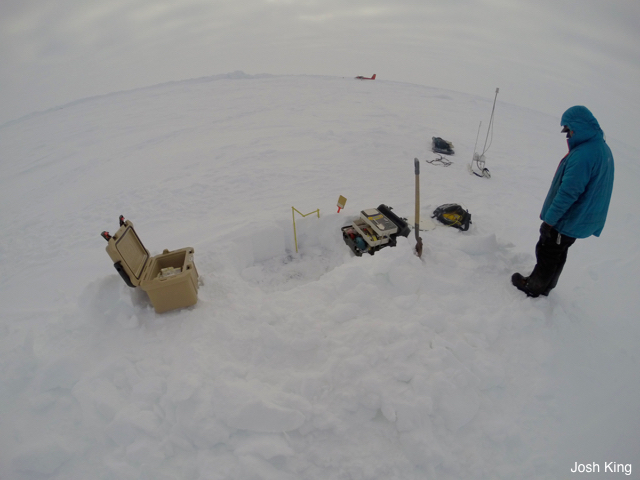 Snow pits allow us to look at the history of the snow cover, from when it was deposited up to now. Persistent winds blow the snow around, breaking the crystals down into small round grains and allowing them to pack tightly and form a wind slab, a layer of dense snow.

Wind breaks down snow into small round grains. (J. King)

Temperature gradients between the cold Arctic air and the comparatively warm sea ice and ocean below change the snow closer to the ice over the winter. The crystals grow larger and can combine into larger grain clusters. The different sizes of snow grains and the different densities of these layers influence the way that the signals from satellite and airborne instruments interact with the snow. 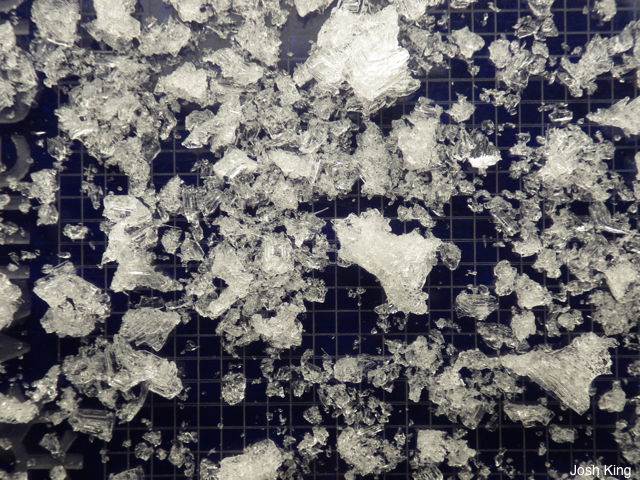 With Josh’s snow pit and our other measurements of the snow and ice complete we packed the equipment into the Twin Otter. Our original plan had been to move back towards Site 4 or 1 but the skies towards Site 6 looked clear and we decided to head there instead.

The light had improved a little and Troy found a safe landing spot quickly. Some representative floes were found on the other side of some large ridges near our landing site. 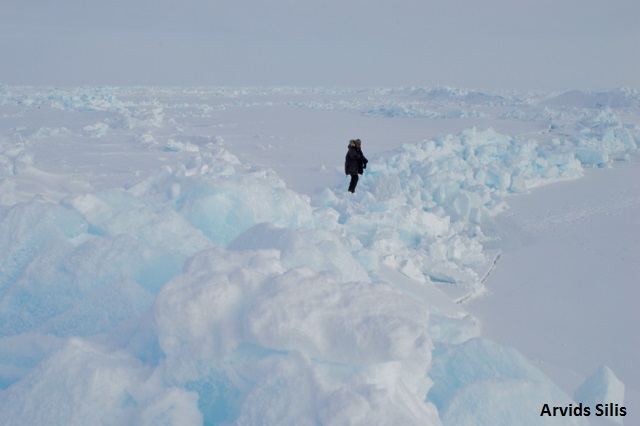 Once again, we completed a full suite of measurements before heading back to the plane and back to CFS Alert for steak night!

Today, we will look at data and make plans for tomorrow and Sunday. CFS Alert personnel have kindly agreed to open the airfield these two days, despite the Easter long weekend, to help us achieve our campaign objectives. We have completed six Sites so far, 2, 3, and 5 through 8. As station 8 is about as far as we can get without a fuel cache and the full team on board, we will sample Sites 1 and 4 (if the weather cooperates) as well as continue exploring the establishment of a fuel cache near Site 7 or 8, or making other arrangements such as reduced gear or personnel loads in exchange for carrying fuel drums.