In Iceland you hear one phrase very often: “petta reddast” which can be translated as “it will all work out okay”.

With that in mind we started planning the flight to have a closer look at strong changes in the horizontal and vertical gradients of the wind speeds in the atmosphere, which is one of the key objectives of the ADM-Aeolus WindVal campaign. 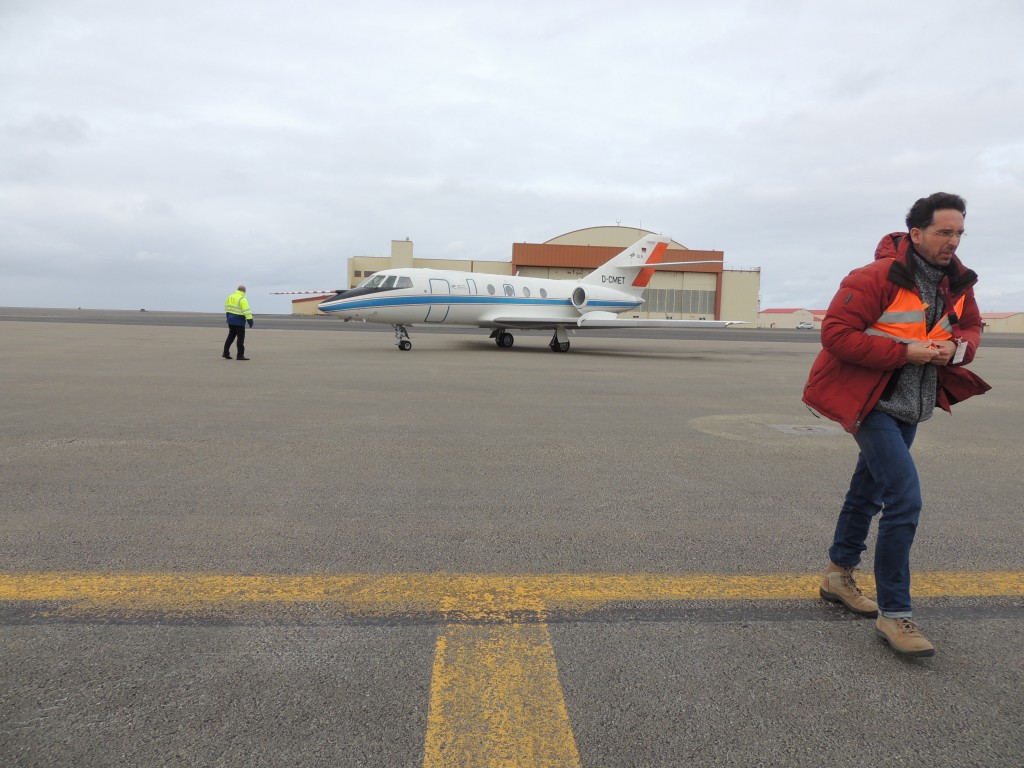 When operating from Iceland, the ideal target region for such an endeavour is in or near a jet stream (fast flowing current in the atmosphere with a meandering shape) over the North Atlantic that is within range of the aircraft. The situation on Friday 15 May 2015 offered a great opportunity to address this aim and to coordinate with the NASA DC-8 to observe strong jet stream winds. We have total of four wind lidar systems on the two aircraft, the DC-8 and DLR’s Falcon. 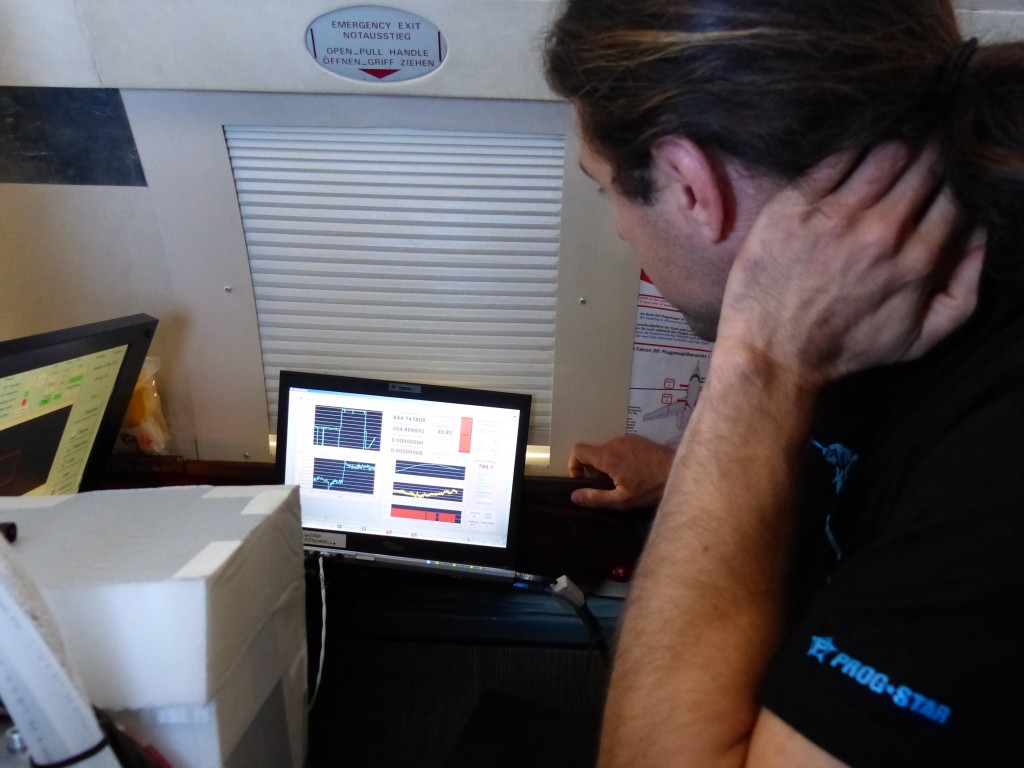 Christian Lemmerz from DLR checking the instrument before take off. (ESA)

The night before the flight, a strong cyclone brought rain and strong surface winds to Iceland. A band of thick cloud extended from Iceland to the UK.

MODIS composite satellite image on 15 May 2015 provided by NASA Worldview, available at https://earthdata.nasa.gov/labs/worldview/

The clouds were moving eastward throughout the day and the region behind the cloud front was calmer, just scattered low and mid-level clouds in cold Arctic air masses. In the beginning the window for operating under good conditions was small but it turned out that the low cloud coverage was ideal to observe the predicted strong westerly winds. 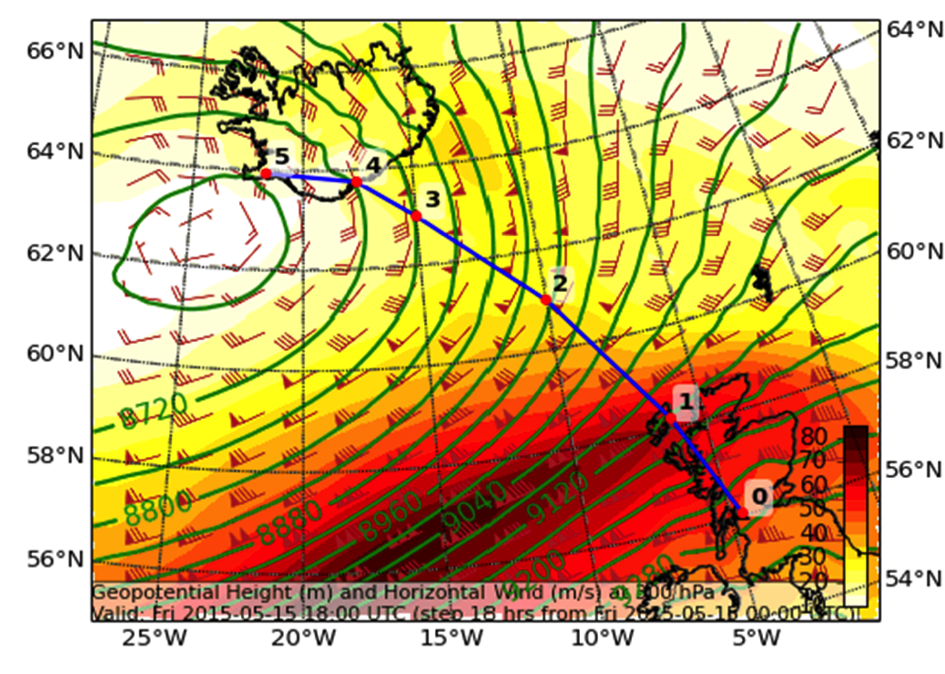 After the surface front passed the airport in Keflavik, the sky cleared and both aircraft took off at 16:00 UTC and turned southeastward towards Scotland. After two hours of flying into steadily increasing winds, the Falcon turned back over Glasgow, Scotland. The DC-8 headed westward and observed lower-level winds on their way home. After four hours, the Falcon returned to Keflavik. The operators and the flight planning crew were very pleased about this mission flight ‘petta reddast’. 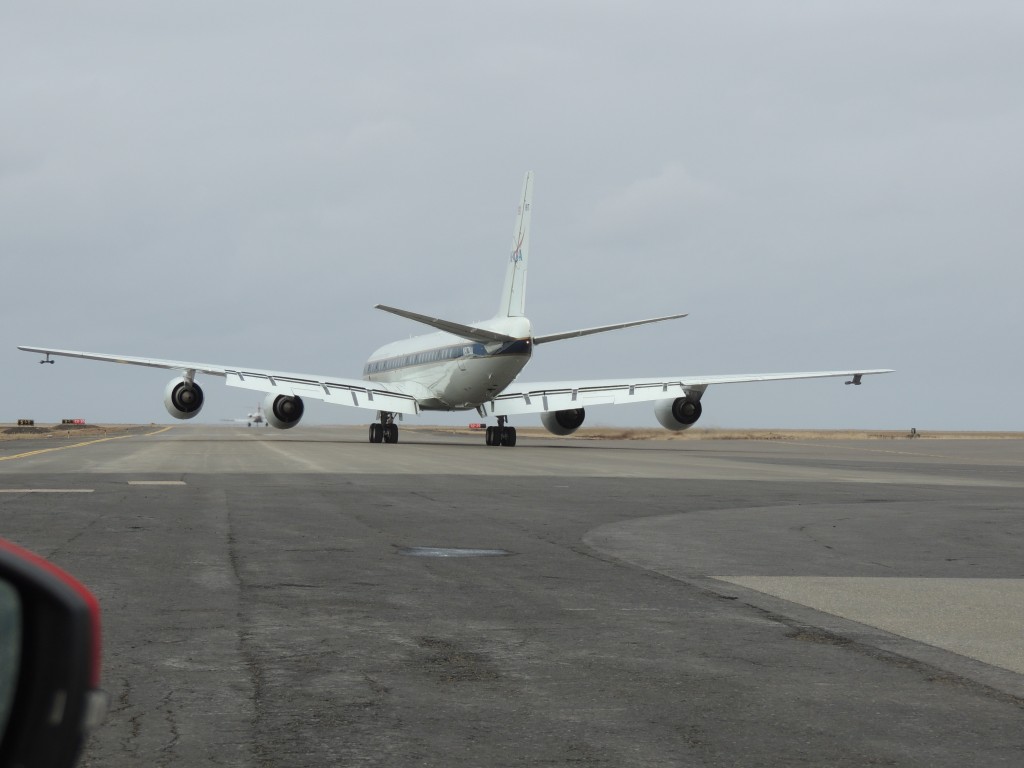 NASA DC-8 following the DLR Falcon on their way to take off. (ESA)

Andreas Schäfler from the Institute for Atmospheric Physics at DLR, Germany commented, “Planning a research flight is exciting every time we do it. You follow how the weather develops over several days. First, you hope that promising weather develops as predicted and later you keep your fingers crossed that the instruments work properly.

“In this case we were very happy that the timing of our flight plan turned out to be perfect with respect to clouds and also the air traffic controls agreed to our flight planning. The instruments collected promising wind data, which bodes well for the coming data analysis. Beside the test and improvement of algorithms for deriving winds in situations of strong wind gradients, this case offers the possibility to verify the representation of jet stream winds in weather prediction models.”

For the upcoming flights we all hope that we keep the spirit of ‘petta reddas’. The next flight will take the crew to Greenland to perform detailed measurements over the ice sheet.

The WindVal campaign is being carried out to support ESA’s ADM-Aeolus wind mission.