SMOS ice: the calm before the storm

As planned, the ship left Longyearbyen harbour Saturday morning under blue skies with instruments mounted. Cruising west through Isfjorden we passed the Svalbard satellite data receiving station where parts of the SMOS measurements are downlinked and ingested into the operational processing chain. 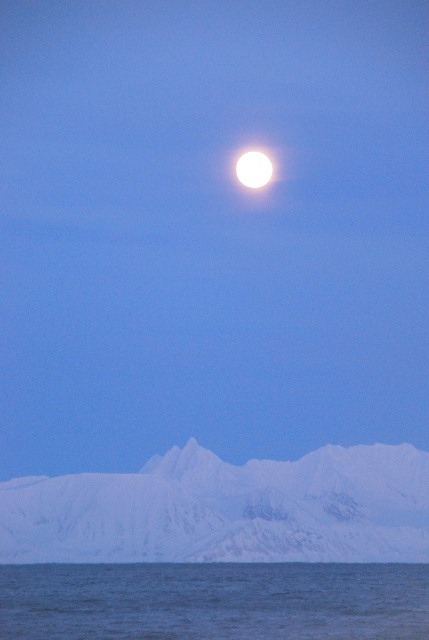 The way south is all quiet with a beautiful sunset in the west while the Moon rises over Sørkapp-Land.

Dr Gerd Müller, the cruise leader from University Hamburg, decided together with the oceanographers to start the profiling measurements at midnight for the next 30-hour transect to the east, making the most out of the favorable weather.

As predicted by ECMWF, the weather changed on Sunday from a windy but sunny day to a full storm with wind speeds of more than 20 m/s, snow showers, and wave around 6 m high.

Although we were well warned, securing and stowing the instruments is hard work under these conditions; although the temperatures are only ‒15°C,  but it feels a lot colder in the fierce wind and the snow.

However, our main problem is the spray that immediately freezes when it comes in contact with the ship.

In the evening, plans changed and we decided to go north.  This will bring us right into the middle of the storm, but also closer to the ice edge, where the waves will be a lot smaller – so, less spray meaning that the ship won’t ice-up as much.

We endured another 10 hours of rough seas, which most of us spent in our berths, either exhausted from the shift work or seasick.

The following morning,  it’s still stormy with winds of 24 m/s, but at least the ship is no longer rolling.  And, we have reached the ice edge! 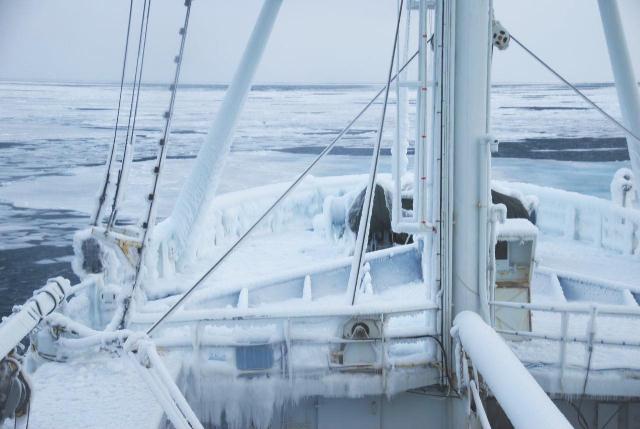 Unfortunately,  bow of the ship, which is where most of our instruments are, is completely covered in 20 cm of solid ice. This means we will have remount the instruments.