Ground work for SnowSAR in Canada

The field team has gone home for a short break before another round of SnowSAR flights in April. They will return to the same cabin in which they stayed in March, located on the shore of Husky Lake. In the meantime, here’s a short description of the work we did on the ground to support the SnowSAR flights. 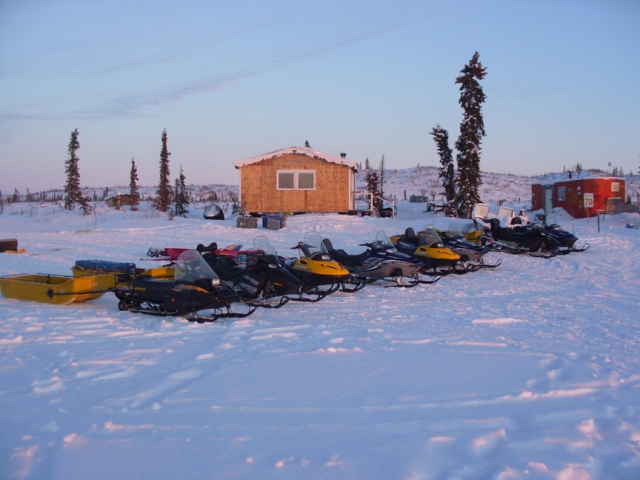 In addition to the main cabin, there is a small structure with room for two or three people to sleep. During the busiest time of the campaign, three people also slept in a tent behind the cabin.

We are currently in a period of unusually intense solar activity, so during some nights the team was treated to northern lights. Another northern phenomena is a ‘Sun dog’ – the scientific name is ‘parhelia’. This is the appearance of two small rainbows on each side of the Sun. They are created by the refraction of light from the low angle of the Sun through clouds that have a high ice content.

It’s been a heavy snow season on the tundra, so the field team had lots of snow to work with. There is evidence that high winds and blowing snow events have been less frequent than normal over the tundra this year.

The snow is less dense than expected, the snow drifts are smaller than normal, and the small patches of trees are covered in snow and rime. Rime is formed by the deposition of water vapour in cold conditions, and gives vegetated landscapes a sepia-toned appearance.

To help interpret the radar signal, it is also important to understand the vertical structure of the snowpack.

How many layers are there? How dense is each layer? What is the grain size of each layer? The traditional way to acquire these measurements is to excavate a snowpit, and make a vertical series of measurements in the pit face. This captures the snow stratigraphy at a point.

It’s also important to understand how the layers in the snowpack vary over the land surface because snow properties can be very heterogeneous due to interactions with vegetation and terrain (such as slopes).

To better understand this variability, some of the field team excavated a 50 m long trench across one of the radar flight lines (see earlier blog post for a photo of the trench from the aircraft).

They then used a near infrared (NIR) camera to take sequential photographs along the length of the trench. The NIR reflectance is sensitive to the snow grain size along the face of the trench, so these photos will be analyzed to provide precise information on how the snow layers vary both vertically and horizontally.

In the trench (Environment Canada)

The field team returns to Inuvik next week. In addition to the SnowSAR, we also anticipate measurements from an airborne LiDAR system. We will post further updates from the field.