We have a ‘Go for launch’. The final exams are behind us and the examination board considers me ready to fly. The process was not straightforward. Two days of hard work and sweating, literally. The Soyuz simulator doesn’t have air conditioning, and neither does my warm space suit. I had to stay calm and think clearly. It went well. Apart from a few blemishes – nothing that would cause any problems in real-life – we all passed the exam with flying colours.

Pitstop on Earth
The two big exams in Star City were for the Russian segment of the ISS and in the Sojuz simulator. The Sojuz exam was the most difficult. Each crew member received four envelopes to choose from. Each envelope contained six situations that can occur during a flight. Everything is possible. We started out with a broken radio transmitter, so ground control could not hear us. Then the infrared sensors that keep the Sojuz in its correct position relative to the earth failed, we had to control its orientation manually. To make matters even worse the Sojuz radar system started to go wrong. We had to dock with the ISS manually as well.

A remarkable part of this exam is lunchtime. We ‘returned’ to earth briefly to eat lunch but promptly crawled back into our space suits and the simulator to continue the next round of simulated disasters. Just after we disconnected from the ISS real smoke started to appear in the Sojuz. Helmets on, ventilation off, electricity off. But that did not work. We had to purge all the air from the capsule to get rid of the fire. After that we had to initiate “emergency programme 5” to return to earth as quickly as possible. The brake motor engaged but quickly stopped working. This was our fifth problem. In our sealed helmets and thick gloves we had to calculate how long the smaller back-up engines had to run. The sixth and last problem was that the back-up engines would not turn off because the computer malfunctioned, we had to turn them off manually.

Relieved
Altogether it was quite a stressful day. I knew I had passed as soon as we were finished but we had a lengthy debriefing with the exam board, specialists and the crew. I was relieved, importantly I had not disappointed my commander. The left seat in the Sojuz, my place as flight engineer, involves many responsibilities and it is easy to make mistakes. This exam proved that we are comfortable flying the space ship. 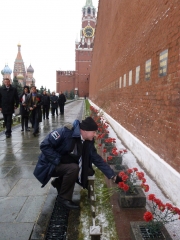 The day after the Sojuz exam was spent fulfilling many activities and traditions. First we had the official meeting of the exam board and the representatives of the various organisations in the white room. Many people gathered to chat and the results of the astronauts where discussed. After that we went to Yuri Gagarin’s office that has been left as it was since the day he died. The crew is expected to write something in the guest book. Then we went on to the Red Square to lay flowers to commemorate fallen cosmonauts by the Kremlin wall. We visited the home of Koroljov, who was the main engineer and driving force behind Russia’s success in space exploration. In the coming weeks we will be undergoing many more of these types of traditions as the Russian space industry has many. I will tell you more in a future blog…