Tune in for the change of command

The ceremony will be broadcast live on NASA TV below and is one of the final acts of Alexander’s Horizons mission before he returns to Earth alongside NASA astronaut Serena Auñón-Chancellor and Roscosmos cosmonaut Sergei Prokopiev on Thursday. 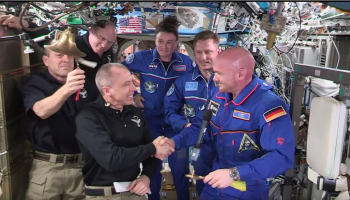 The ringing of a bell on board and a symbolic hatch key handed from one commander to the other will signify the change in leadership.

Despite the challenges, it has been a successful second mission for Alexander. Read more about what lies in store when an astronaut returns.