Exerting the force, plumbing and melting in space

Gravity is constantly exerting its force on objects. When you lift a cup of coffee, you are moving it against gravity. Humans learn how to live with this force of nature from infancy – babies learn to adjust their grip to the weight of objects.

In the weightless environment of the International Space Station astronauts need to adjust to the new world in space much like infants need to learn to hold on to objects. How his brain adapts to an environment where objects have no weight and decides how much grip is needed to move things is at the core of the Grip experiment.

For the third and last session of the experiment ESA astronaut Alexander Gerst performed a series of movements in a seated position while holding a purpose-built sensor. Measurements of the grip forces, skin moisture and acceleration will help assess how the body adapts to microgravity.

Another experiment session came to an end last week during the Horizons mission. Alexander completed the last session of the GRASP experiment, a name that stands for Gravitational References for Sensorimotor Performance.

When reaching for an object, the brain calculates how far your hand is by using visual clues as well as taking into account how shoulder muscles counteract the downward force of gravity. GRASP is researching the physiology behind eye–hand coordination. 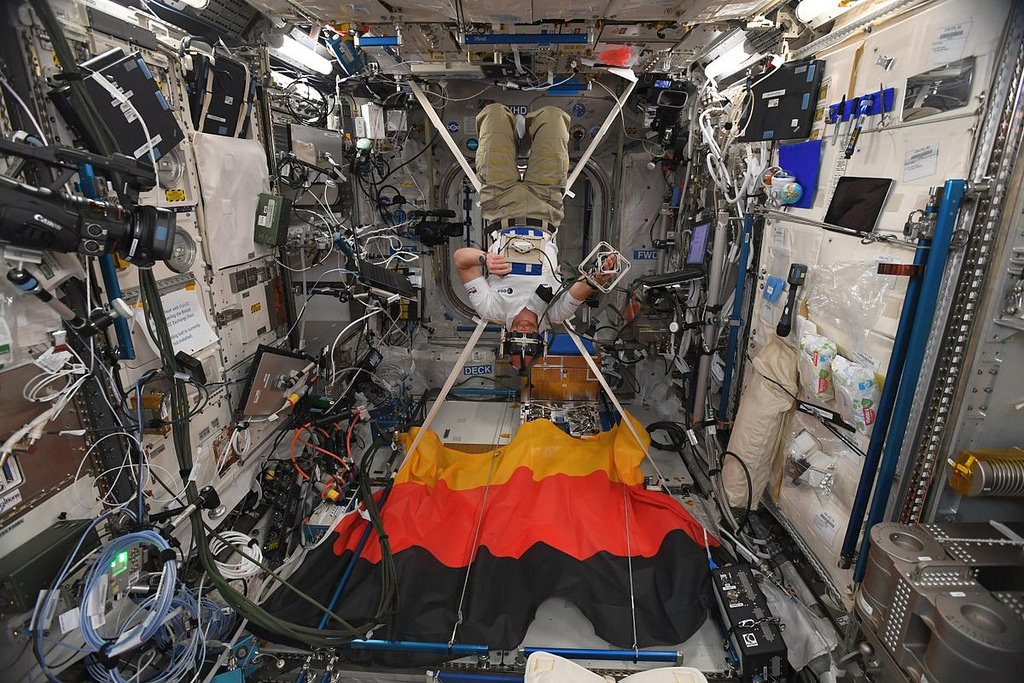 Alexander ran his last session seated and free-floating last week on the Space Station. This research will help European scientists identify the workings of the vestibular system that keeps our balance, and how it connects to the other sensory organs. The results could shed light on how to treat patients showing a loss of vestibular function on Earth. Find more about this experiment in our previous blog entry.

In the meantime, NASA astronaut Serena Auñón-Chancellor performed some space plumbing. She connected the waste water flow in the Destiny laboratory to ESA’s Advanced Closed Loop System that will recycle carbon dioxide into oxygen on the Space Station. This reconfiguration will allow hydrogen and carbon dioxide to react over a catalyst to form water and methane in the next weeks.

While everybody sleeps on the Space Station, experiments keep running in the Columbus laboratory. Another batch of science was completed overnight with the Electromagnetic Levitator to better understand the properties of liquid metallic alloys. This furnace heats metals up to 2100°C suspended in mid-air. Last week, cosmonaut Sergei Prokopyev injected two types of gas – helium and argon – to heat liquid metals.

Observing these metals cooling in weightlessness helps reveal the core process of physics. The experiment will aid the development of new light-weight, high-performance structural materials for use both in space and on Earth.

This week Sergei is getting ready to take part in yet another fundamental physics experiment. The cosmonaut started to familiarise himself with the Plasma-4 (or PK-4) facility in preparation for the first science run this week.

This ESA–Roscosmos experiment recreates atomic interactions. To do so, the cosmonaut injects microscopic dust into neon or argon plasmas and scientists on Earth try to understand how these particles interact and bond to form atomic structures similar to solids, liquids or gases.

Lost in space and time. Credits: A. Suenson

Later this week Alexander will be testing his sense of time for the sixth and last time on the Space Station. Scientists believe that astronauts underestimate time in orbit, just as they have an altered perception of distance in space. Mental representations of space and time are believed to share the same neural networks.

Alexander will gauge how long a visual target appears on screen. His reaction times are recorded to process speed and attention as part of the ‘Time’ experiment. Learning more about the subjective perception of time and how to deal with it could improve the lives of those who suffer from isolation or confinement, whether real or perceived: the elderly and bedridden, people working shifts or in isolation, mentally-ill patients, and the incarcerated. For astronauts this is important because a misperception of time could jeopardise crew safety.