ESA astronaut Alexander Gerst is looking to the future. He took this image of Earth’s closest neighbour from the International Space Station recently, and it shines a spotlight on the next major focus for ESA and other international agencies – returning humans to the Moon. 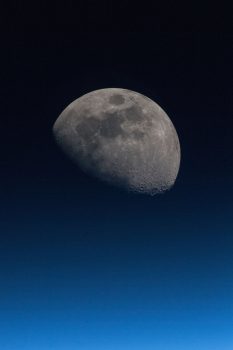 This time around the intention is stay for longer and work hand-in-hand with robots. But why the Moon, why now, and why robots? It’s time to take a closer look.

The Moon is close, interesting, and useful. As the closest celestial object to Earth, it can be reached by rocket launched on any day of the year. As witness to the last 4.5 billion years of Earth’s evolution, it is one of the most interesting places for scientific investigations and could help answer questions about the conditions under which life first formed. The Moon is also useful as a natural stepping stone for solar exploration. It’s thought that lunar resources could pave the way for an international research base and even provide an in-situ source of rocket propellant.

In fact, Europe is already working with Russia on the Luna missions to prepare for robotic landings – including Luna-27 that will look for water ice as early as 2022. The new Orion vehicle, with the European service module (ESM) at its core, will help build a habitat known as the Lunar gateway. Located in lunar orbit, this will enable us to live and work a thousand times further out in space than the International Space Station.

With resources to create fuel and sustain a research base looking promising, the Moon could in the longer term become a stopover on our way to Mars and even a habitat in itself within decades.

The robots are coming

Everything we do in space comes back to a desire to visit new places and gain new knowledge that will benefit life on Earth. To do that, we need to work together with the best minds – in both the private and the public sectors – and make use of advances in technology that will expand and enhance our human skills. 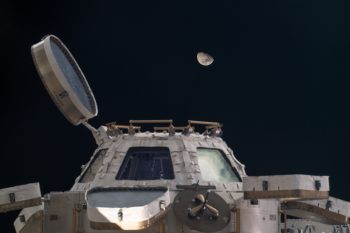 While people have set foot on the Moon, no human has ever visited the far side of the Moon or the lunar pole regions. So, to help ensure our activities are safe and sustainable, first we need to gain a clear view of the lunar landscape.

Robots and unmanned rovers could be remotely operated from a lunar space station, and experiments like GRASP currently taking place on board the International Space Station could aid this operation as we gain a better understanding of how gravity affects hand-eye coordination up in space.

Expanding human presence beyond Earth to the Moon in the near term and further into deep space at a later stage is an ambitious programme. But reaching for the Moon via the Lunar gateway as a base camp is crucial in taking that next step.

Find out more about ESA’s vision for the next decade of space flight.