Have you ever considered yourself capable of manipulating gravity? When you grip an object, you are doing just that.

Gravity is constantly exerting its force on objects, most notably by keeping everything weighed down. But when you lift a cup to your mouth, you are playing against gravity.

Despite gravity being a force of nature, living with it does not come naturally to humans; we learn how to work with gravity in infancy when we pick up objects and learn to adjust our grip to its weight and gravitational force. 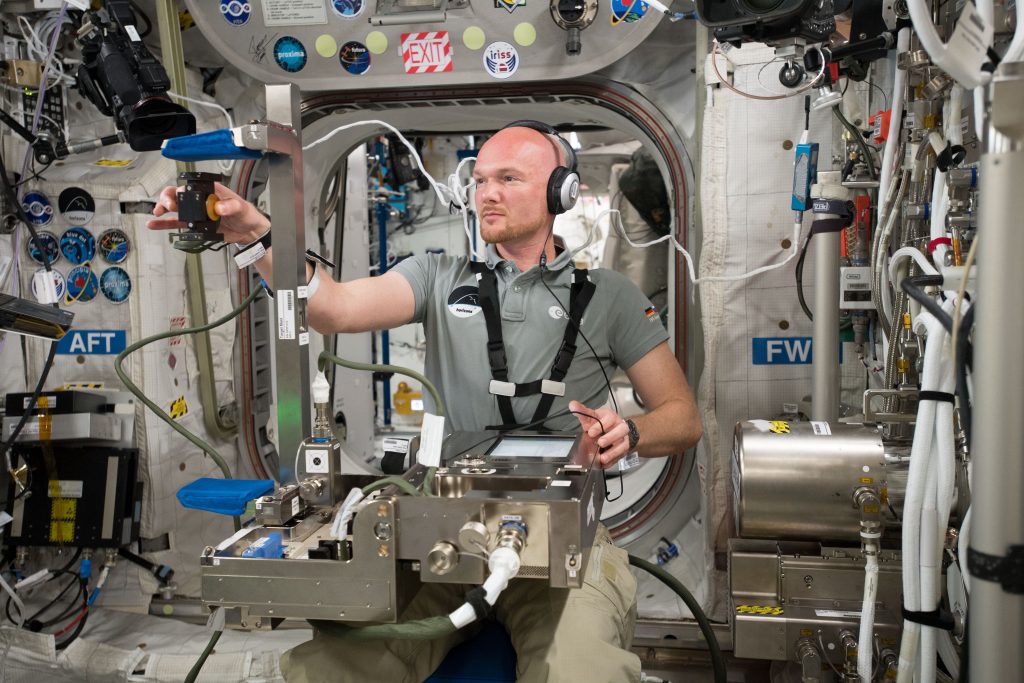 How our brains learn this process is at the core of the Grip experiment, being performed in this image by ESA astronaut Alexander Gerst on the International Space Station on his current Horizons mission.

In the weightless environment of the Station astronauts are like infants learning to adjust to the world in which they find themselves.

In microgravity, objects have no weight, which is an important indicator to our brain of how much grip force to apply to an object when moving it up or down. Furthermore, the inner ear no longer tells us which way is up. Naturally, our brains are a little thrown off and our coordination is disturbed. Researchers from the Institute of Neuroscience in Brussels are studying how long it takes our brains to adjust to this dynamic.

How does the experiment work? Alexander performs a series of movements while gripping a purpose-built sensor that measures grip-forces, moisture and acceleration, and more to assess how the body adapts to situations in which there is no up or down.

Alexander will carry out three sessions of the experiment during his mission. As with most experiments flown on the Space Station, the data will be compared to preflight and postflight sessions.

The Grip experiment has flown on 20 parabolic flight campaigns. Results indicate that short-term exposure to microgravity induces subtle changes in how the forces used in gripping an object are coordinated. Our brains anticipate the effects of gravity even when it is not there. On the Space Station, researchers can now observe the long-term effects. The experiment was first commissioned by ESA astronaut Thomas Pesquet during his mission in 2016.

These experiments are designed to help us better understand human physiology and disease diagnosis on Earth. They are also helpful to engineers designing prosthetic limbs on Earth and will be used to help design robot-human interfaces so astronauts can command robots on other planets, allowing us to further explore our Solar System.

Learn more about Grip in this video produced by Principle Investigator Jean-Louis Thonnard and his team:

Andreas Schepers is a communication and social media officer and a member of the ESA newsroom. His office is located at ESA's space operations centre in Darmstadt, Germany.